China's pharma giant Sinovac Biotech claims its vaccine has a 100% success rate at preventing fatal COVID-19. However, the jab is likely less effective at curbing infections. Follow DW for the latest. 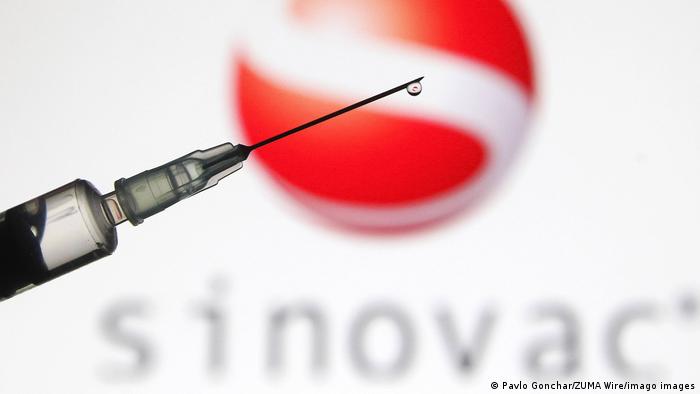 China's Sinovac said its CoronaVac vaccine was found to be 100% effective in preventing the hospitalization and death of COVID-19 patients, citing late-stage trial data. However, the product had a lower efficacy rate in blocking infections. CoronaVac is one of three vaccines developed in China.

According to a trial in Brazil, the CoronaVac jab averted all coronavirus hospitalizations and deaths among the recipients and was also 83.7% effective in preventing cases that required medical treatment. However, it only managed to stop 50.65% of all infections. At the same time, another trial in Turkey found that the vaccine was 91.25% effective in blocking infections.

The reason for the discrepancy was not immediately clear. In comparison, BioNTech-Pfizer's vaccine was reported to be 95% effective, with Russia's Sputnik V providing around 92% protection, and a product by US company Johnson & Johnson lagging behind at 66% effectiveness.

Indonesia has authorized the use of the Sinovac's CoronVac for the elderly, according to Reuters.

The country has inoculated hundreds of thousands of healthcare workers with the Chinese vaccine since January, but was hesitant to include the elderly, citing safety concerns.

Myanmar has approved the use of Sputnik V, becoming the 21st country to register vaccine, the Russian Direct Investments Fund said on Twitter.

In Canada, Prime Minister Justin Trudeau said on Friday that Canada was on track to get 6 million doses of coronavirus vaccines by the end of March. Trudeau's statement comes amid growing criticism that his government is failing to get vaccines on time.

"I speak almost every week with CEOs of these vaccine companies, and they have assured me that they will meet their obligations,” said Trudeau. He added that there is a "lot of anxiety and a lot of noise" but Canada was very much on track to meet its vaccine goals.

US President Joe Biden said on Friday that he doesn't expect the coronavirus relief bill to include a hike in the minimum wage. In an interview with CBS Evening News, Biden cited Senate rules for the exclusion of the minimum wage, but said he was in favor of raising it.

In Brazil, Pfizer Inc. has submitted an application for approval of its vaccine, which it developed with BioNTech.

A Brazilian drugmaker, Uniao Química, also expects to get regulatory approval from the government by next week for Sputnik V, the coronavirus vaccine developed by Russia. A senior company official told the Reuters news agency that they would draw up a contract with the health ministry for 10 million doses of the vaccine, priced at $10 (€8.3) per dose. Uniao said that the government was also interested in buying the company's domestic production of Sputnik V.

So far, the South American country has used Sinovac’s and AstraZeneca shots to inoculate its population.

The infection rate in Germany continued to fall with the Robert Koch Institute reporting 10,485 new coronavirus cases on Saturday and 689 new deaths. The national rate of infection per 100,000 people in the past seven days fell to 77.3, down from a peak of 197.6 on December 22, but not yet at the government's goal of 50.

Germany's Health Minister Jens Spahn said in an online event on Thursday evening that he was hopeful for the development of a vaccine that could be administered to people younger than 16 by the summer. The AstraZeneca vaccine is only suitable for people over 18 while the BioNTech-Pfizer and Moderna vaccines can be given to people aged 16 or more.

German President Frank-Walter Steinmeier told the Rheinische Post newspaper on Saturday that Berlin will host a memorial ceremony on April 18 for all those who have died during the coronavirus pandemic.

Sweden announced on Saturday its plans to develop a digital vaccination certificate to allow inoculated people to travel.

Lebanon is easing its coronavirus restrictions from February 8, after imposing three weeks of restrictions to stem a rise in cases of the novel coronavirus. "Sectors will reopen progressively, in four phases," said caretaker interior minister, Mohamed Fahmi. The first phase of the reopening will last two weeks.

Fahmi added that to leave home, people would still need to be authorized. According to Lebanon's lockdown rules, individuals can leave their home to go to the hospital or change money, for which they must carry authorizations. Lebanon's health minister said that the government was still worried about the increase in coronavirus deaths.

Meghan and Harry interview: The reactions 4h ago