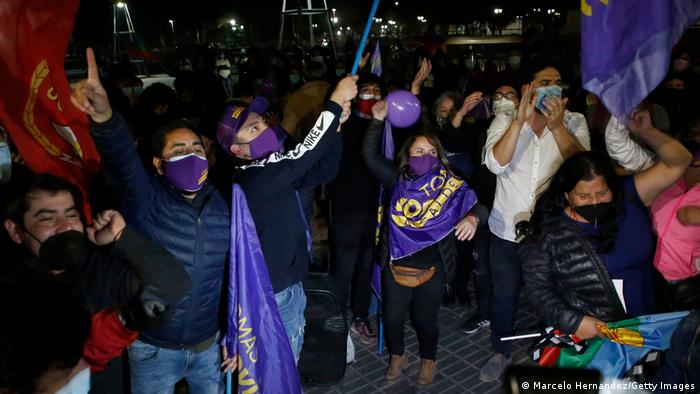 Chile's ruling center-right coalition has failed to secure control of the body that will rewrite the country's constitution, according to early results of a vote that has been called the most important in Chile since the fall of its military dictatorship in 1990.

On Saturday and Sunday, Chileans cast ballots to elect 155 delegates who will be tasked with drafting the new constitution. The current Pinochet-era charter is widely blamed for social inequality, which sparked massive protests in 2019.

With more than 90% of ballots counted, projections show that Chilean President Sebastian Pinera's coalition, Chile Vamos, has secured just 21% of the votes, according to the electoral authority Servel.

Pinera's coalition was aiming to win at least a third of the seats in the 155-member body, as any proposal to be included in the new constitution will need two-thirds approval.

Chile on its way to a new constitution

Independent candidates running on a variety of campaign promises and programs are expected to take more than 40% of the seats. Candidates aligned with left-wing parties received a third of the total vote.

What do the results mean for Chile?

The projected victory of independent and left-wing delegates has been seen as a rejection of Chile's ruling right and of traditional political parties.

President Pinera said the results were a sign that his coalition is not "attuned to the demands and aspirations of citizens."

"We are being challenged by new expressions and new leadership," he said.

Leftist parties, however, want privatized resources to be returned to state control and more public spending on education, health, pensions and social welfare. A new constitution could also overturn the privatization of water, an issue that has become increasingly pressing in a country facing water scarcity.

A number of independents emerged during the uprising against Pinera's government in 2019, and include actors, writers, academics and lawyers. Their strong performance caught many observers by surprise.

"The political system is being reconfigured," Mireya Davila from the University of Chile's Institute of Public Affairs told AFP news agency.

"The electoral force of the independents is much greater than previously thought and this confirms that the citizenry is fed up with the traditional parties."

Why is Chile voting for a new constitution?

A new constitution was a central demand of the 2019 protests, which left several dozen people dead, and shut down the capital, Santiago, for days at a time.

Chile's current constitution was drafted drafted during the 1973 to 1990 dictatorship of Augusto Pinochet.

It promotes private enterprise in all sectors of the economy, including education, health and pensions.

This privatization has been blamed for deep social inequality in Chile, and was one of the main drivers of the protest movement.

In October 2020, 80% of Chileans voted in favor of a new constitution to be drafted by a body of elected delegates.