Protesters rally in Chile ahead of landmark referendum

Thousands have gathered in the Chilean capital on the anniversary of mass protests and a week ahead of a referendum on the country's consitution. Protesters have attacked churches, torching one. 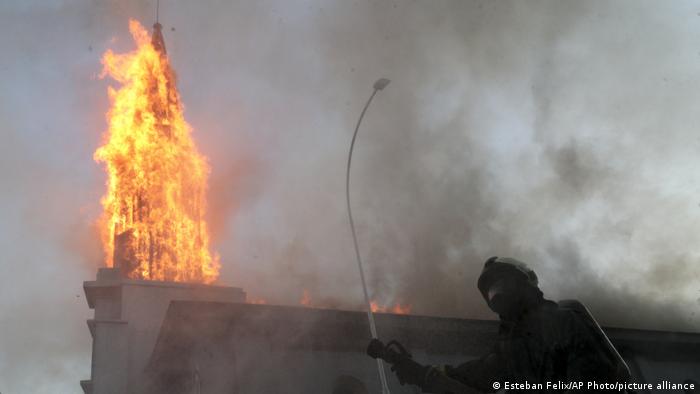 Thousands of Chileans gathered in the center of Santiago on Sunday to mark the anniversary of the outbreak of mass protests that rocked the country and in anticipation of a key referendum on October 25 over scrapping the dictatorship-era constitution.

Protesters congregated in the Plaza Italia in the country's capital, one year on from the outbreak of mass protests in 2019, which left 30 people dead and thousands injured.

Although starting off peacefully, protests turned violent as groups set fire to two churches, managing to burn down the Iglesia de la Asuncion in Santiago, as witnessed by local journalist and shared on Twitter.

A local media outlet tweeted a video showing crowds gathered around the church while smoke billowed from the roof. "Protesters burn the 'Parroquia de la Asuncion' church," they announced.

There were also reports of protesters setting fire to a church belonging to the military police, however this was soon brought under control.

Protesters in the main square struck a different tone

"I've come to celebrate something which I never imagined would be happen in Chile after the return to democracy," Olga Neira, a 68-year-old doctor who was at the protest with her daughter, told AFP news agency.

"This, what's happening today, is beautiful, and next Sunday will be even better," she said, certain of a positive result in the referendum.

The police — who had come under fire for their violent response to earlier protests — remained comparatively subdued in response to early reports of violence and vandalism. 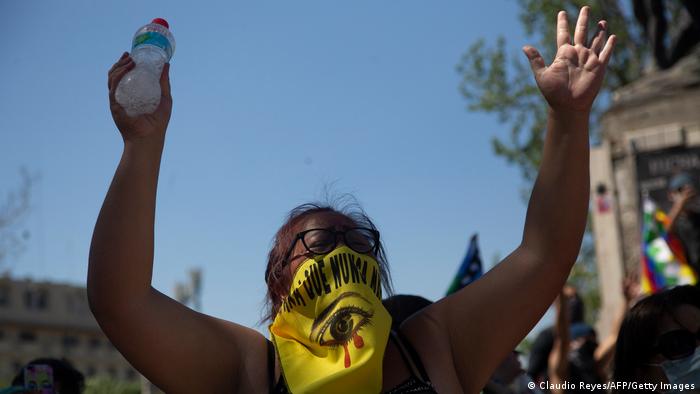 The government deployed 400,000 police officers throughout the country, with the expectation that protests would take place in other cities too.

The atmosphere was generally one of high spirits, with protesters hitting pots and pans and playing music.

"It's beautiful, something good and positive … we have to be united, the people of Chile have to unite and we have to believe that we can do things," 43-year-old Viviana Donoso told AFP, while drums played constantly in the center of the square.

The referendum over whether to scrap the constitution, which came into effect under the brutal dictatorship of Augusto Pinochet, had been one of the main demands of the mass protests. The protests, which began on October 18 last year, also made calls for reforms to the pension, healthcare and educational systems.

A country emerging from lockdown

Chile has seen renewed pockets of violence as it emerged from a three-month lockdown as part of the country's response to the coronavirus pandemic. Many protesters on Sunday wore masks, however, many could also be seen standing close together raising renewed concerns about potential outbreaks.

The referendum on the question of the constitution had originally been planned to take place in April, but was delayed due to the pandemic.

Center-right President Sebastian Pinera, whose popularity has plummeted as a result of the protests, called on the mass gathering to remain peaceful and for people to stick to the social distancing requirements.

Officials confirmed 13,635 deaths over the course of the pandemic.

Hundreds of Chileans blinded by police since protests began

More than 200 protesters have been blinded by pellets fired by state security agents. The National Congress has bowed to a key demand of the monthlong rallies and ordered a referendum on a new constitution.