The Chilean government celebrated 30 years of democracy in the country. Students, however, staged massive protests to call out the president’s response to income inequality. 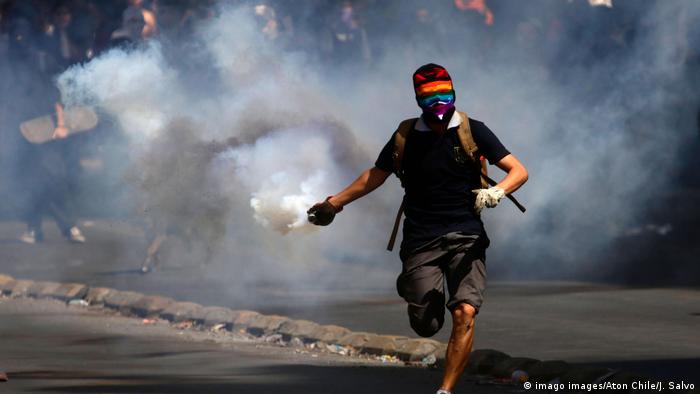 As Chile celebrated three decades of democracy on Wednesday, students across the national capital ramped up protests against President Sebastian Pinera over income inequality in the country.

"We must combat violence and care for our democracy," said Pinera, in a speech at the presidential palace. "Democracy is never guaranteed."

Chile has seen a series of mass protests against inequality since October last year, when the government attempted to raise metro fares. Pinera has been under fire for the strong police response to these protests, including a liberal use of tear gas.

Students have taken an active part in these civil disobedience protests, even blocking public transportation by sitting with their legs dangling over the lines at multiple metro stations. One of the top trending topics on Twitter in Chile has been #FueraPinera or "Pinera Out."

Chilean dictator Augusto Pinochet handed over power to Patricio Aylwin on March 11, 1990, which marked the country's return to democracy after Pinochet came to power in 1973. Numerous cases of government excesses — including torture and killings — were reported during this period.

Multiple cases of police brutality have been reported during protests against Pinera, who has been in office for two years. Many opposition legislators chose to boycott the celebratory event at the presidential palace in light of the authorities' response to protesters.

Pinera addressed the protests during his speech, as he talked about the "many problems that have caused great pain to the soul of our nation and that undoubtedly require the commitment and contribution of all Chileans."

Investigators found that authorities have used unnecessary levels of aggression against protesters resulting in serious injuries and even deaths. The anti-government unrest has been ongoing for almost two months. (14.12.2019)