Investigators found that authorities have used unnecessary levels of aggression against protesters resulting in serious injuries and even deaths. The anti-government unrest has been ongoing for almost two months. 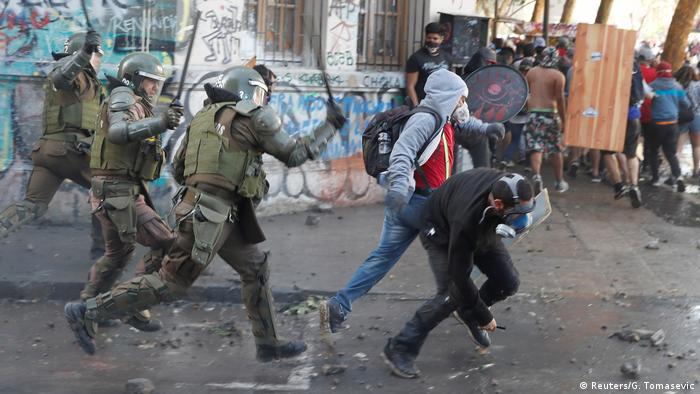 The UN human rights agency found that deaths, torture, sexual abuse and the use of excessive force were the results of authorities reacting in a "fundamentally repressive manner."

The report was released by the UN Human Rights Office, which is headed by former Chilean President Michelle Bachelet, a political opponent of current President Sebastian Pinera.

The high commissioner urged the government to allow its citizens to peacefully demonstrate without being physically hurt.

"There are reasonable grounds to believe that ... a high number of serious human rights violations have been committed," the report concluded. "The majority of those who have exercised the right to assembly during this period, have done so in a peaceful manner."

Investigators mentioned the plight of the roughly 350 people left with eye or facial injuries caused by security forces firing shotguns at close proximity to demonstrators. Human rights officials said this proves that "less-lethal weapons" had been used "improperly and indiscriminately," contrary to international principles on minimizing the risk of harm.

Anti-government protests began in Chile on October 18 when a student-led demonstration over an increase in subway fares turned into a much larger and broader movement with a long list of demands that largely have to do with the wide gap between the rich and ordinary Chileans.

Citizens called for reforms to health care, education, the pension system and even the constitution, which dates back to 1980 and the military dictatorship.

Making Chilean wine with the power of the sun

As droughts and rising temperatures hit food producers in Chile, some small and medium businesses are switching to renewable power and learning about energy efficiency. (28.11.2019)

A massive search operation off the tip of South America has turned up debris believed to be from an ill-fated Chilean cargo plane. The aircraft vanished en route to Antarctica with 38 people on board. (11.12.2019)

Police break up Istanbul protest of violence against women

Hundreds of women gathered in Istanbul to perform a feminist protest dance and song from Chile. The viral song defends rape victims and denounces the state for not doing enough to combat violence against women. (09.12.2019)

Chile: More Slums in the Cities