Unrest has been ongoing for almost a month and now it is starting to hit the nation's currency. Tear gas and water cannons have been used by police as a way of dealing with protesters. 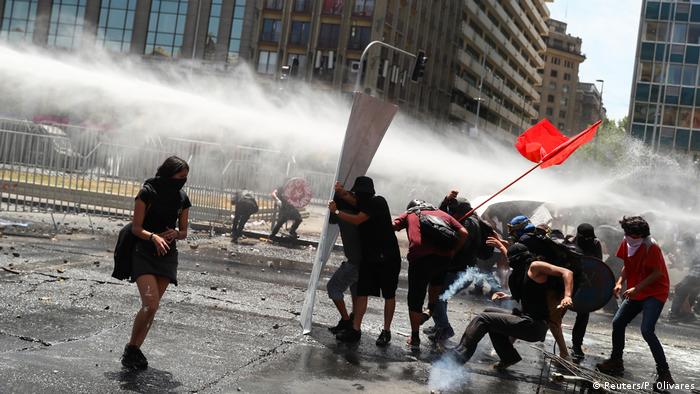 Chile's currency dropped to a record low on Tuesday as hundreds of thousands took to the streets with anti-government demonstrations showing no signs of abating.

Demonstrations were also in full flow in the coastal city of Valparaiso as citizens forced government offices and local transport to shut down. Protesters clash with security forces during a protest against Chile's government in Valparaiso, where a number of government buildings were forced to close down

Chile is one of the wealthier countries in Latin America, but it is also one that has a large disparity between the rich and the poor, which has been cited as one of the main reasons behind the unrest.

Meanwhile, the Chilean peso hit a record low of 784 pesos to the US dollar, while the government has admitted unease at the fall in value.

"It's a sign of concern that we're looking at closely," said Finance Minister Ignacio Briones, adding that the depreciation "is a sign of the instability that we are experiencing."

Protests and rioting have intensified in Santiago, where students are opposing a hike in the price of subway fares. Authorities enacted a state of emergency after a night of vandalism and violence. (19.10.2019)

The government has issued a state of emergency and extended a curfew for the second consecutive night in Santiago. It's unclear if reversing transport fare hikes will calm violent unrest that has left three people dead. (20.10.2019)