The coronavirus crisis and simmering discontent over inequality and a neoliberal economic model has brought Chile to the brink of a major political crisis. Can President Sebastian Pinera's conservative coalition survive? 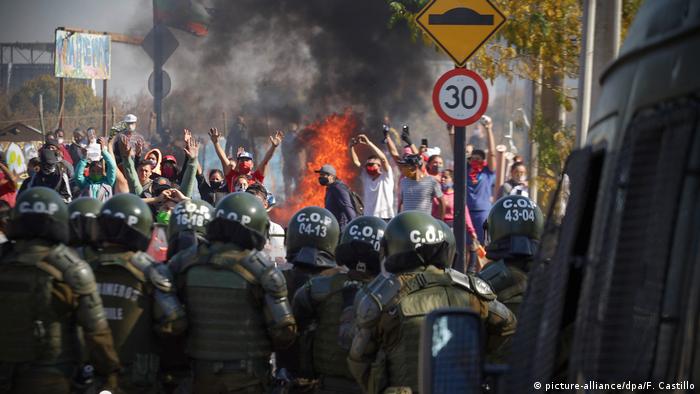 The political atmosphere in Chile is highly charged. Parliament just adopted a controversial reform that allows citizens to have 10% of their pensions savings paid out as emergency coronavirus aid. The decision deals a blow to the conservative government of President Sebastian Pinera, which had vowed not to interfere with the decades-old private pensions scheme.

The president now finds himself with his back to the wall. Protests against the country's neoliberal economic order, tensions within the governing coalition and the coronavirus crisis have caused the president's approval ratings to plummet. In a recent survey, only 6% said they support Pinera, and 81% said the Chilean government's crisis management was poor or extremely poor. 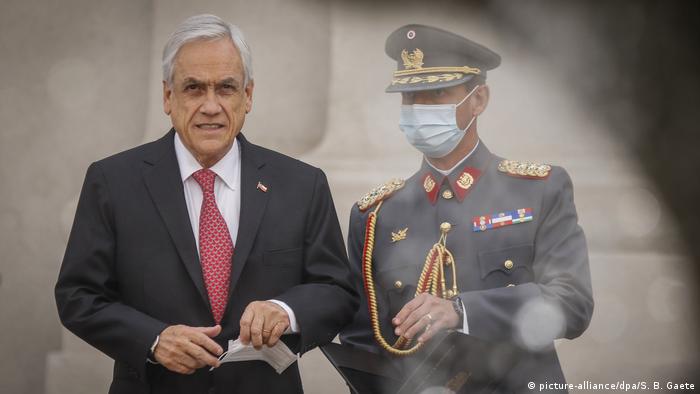 The coronavirus has only compounded prooblems for President Pinera (L)

The anthropologist Pablo Ortuzar, one of the new right-wing intellectuals, said recently in a radio interview, "I'm not sure Pinera will be able to see out his term in office. The president is alone and politically isolated, while state structures are collapsing around him."

Other representatives of the right-wing spectrum are less extreme in their diagnoses, but they are also far from optimistic. In an interview with the Chilean weekly magazine The Clinic, political scientist Daniel Mansuy stated that the current process of constitutional reform, the pension system crisis and the possible collapse of the right-wing coalition could make Pinera the "gravedigger of the Chilean presidential system."

Last October, Chileans began taking to the streets of the capital, Santiago, to protest a spike in subway ticket prices. The protests soon grew into countrywide movement taking aim at low wages, high education and health care costs and the growing divide between the rich and poor. Under pressure, President Pinera then announced a constitutional referendum would be held in April. It has since been postponed to October due to the pandemic. Massive police crackdowns on protesters, cabinet reshuffles, half-hearted reforms and the resignation of Health Minister Jaime Manalich have left President Pinera's government overwhelmed and helpless.

Analyst Patricio Navia wrote in El Libero, a private Chilean news site, that it is "very clear that the Chilean right, as we knew it, is dead." He described the government as having "lost its orientation."

But while the government is staggering, the opposition appears just as helpless. According to journalist and political commentator Ascanio Cavallo, "The government coalition Chile Vamos is just as fragmented and incapable of governing as the opposition. That is why there are currently no alternatives."

Nevertheless, Andreas Klein, a political scientist and representative of the Konrad Adenauer Foundation, a conservative German think tank, believes President Pinera is under considerable pressure. "The government is not responsible for the coronavirus crisis nor for last year's social crisis. For 24 of the last 30 years, Chile was governed by a center-left alliance," he adds.

Klein believes that Pinera's possible departure would "not automatically mean the left would win the new elections." He believes the present task is to find solutions within the existing system.

"I believe that President Pinera will conclude his mandate and that this is also right from a democratic point of view," Klein says.

The big problem of Chilean politics is its fragmentation, he adds, explaining that there are no large, compact blocs any more, but rather atomized sectors that seek temporary agreements under particular circumstances.

"The problem of the opposition in Chile has several layers. One of them is a question of generations. There is one group that rejects the post-dictatorship transitional arrangements and another group that sees them as a government consensus," Mario Alvarez, from the Institute of Communications Studies at Leeds University in the UK, explains to DW.

Even though Chilean dictator Augusto Pinochet's reign ended 30 years ago, the regime's constitution largely remains in place. There have been some reforms, such as ending binomial voting, which effectively barred smaller parties from entering Parliament. Meanwhile, the country's neoliberal economic order has not been fundamentally altered since Pinochet's rule ended. In addition, Chile's military has never accounted for human rights abuses committed during the Pinochet years and refuses to help shed light on the past. 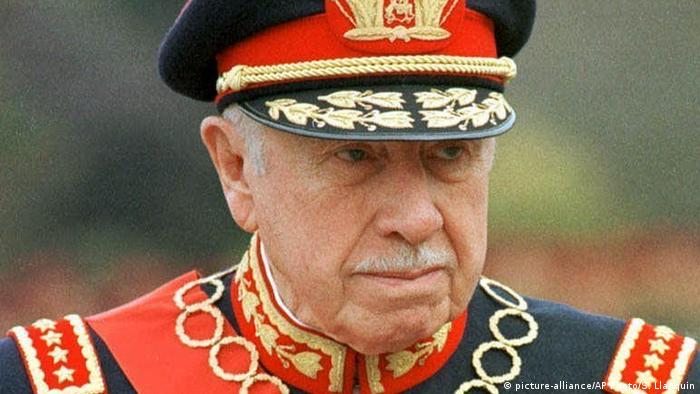 But the opposition's fragmentation is based on more than just the legacy of the dictatorship, Alvarez says: "There are those who respect institutions of political representation, such as parties and unions, and those who see them as mere instruments to stifle the energy of social change."

"None of these tendencies within the opposition has been able to prevail, and one could hope that the process of constitutional reform forces them into a dialogue, but that remains to be seen," he adds.

A new Chilean model ahead?

The opposition won a rare victory over the government with the successful pension-payout vote. But Klein is skeptical that such consensus will be long-lasting.

"Chile is facing big challenges. It has to overcome the coronavirus crisis and get the economy moving again," he says. "Parliamentary and presidential elections are coming up next year, and a new constitution needs to be drafted. It is time to break away from traditional bloc-based thinking and strengthen the political center, which combines economic experience with a social consciousness." 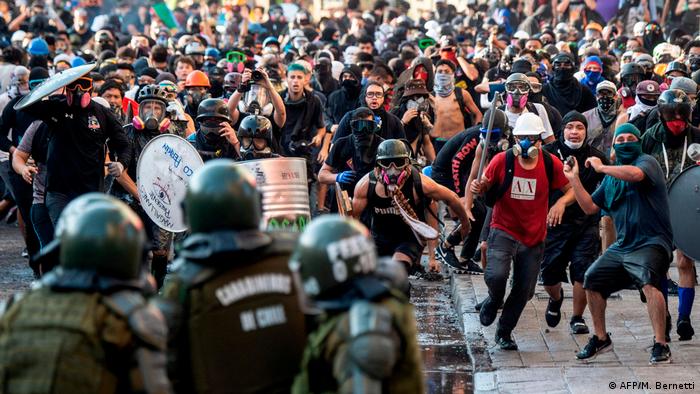 A constitutional referendum was one of the protesters' main demands over the past months. They are hoping for a new model that would minimize social disparities and equalize the distribution of wealth. Today, approximately 1% of Chileans own some 30% of the country's wealth.

For his part, Alvarez warns of a loss of trust in democratic institutions. "Pinera has basically already resigned," he says. "He may still be in office, but he is not governing. The problem is that the institutions owe their legitimacy partly to their effectiveness. When democracy doesn't show itself to be at least minimally effective in solving daily life, its existence is in danger," he says.

The number of infections is constantly rising and the flattening of the infection curve seems to be a long way off. Were the strict lockdown measures in Latin America ineffective? (21.07.2020)

Chile is choosing its next president as the country prepares to rewrite its Pinochet-era constitution. Two diametrically opposed politicians are leading the race, which will be decided in the runoff round.