Mexico is the first Latin American country to roll out a vaccine program for COVID-19. The news signals a turning point for a country that up to now has taken a comparatively laissez-faire approach toward the pandemic. 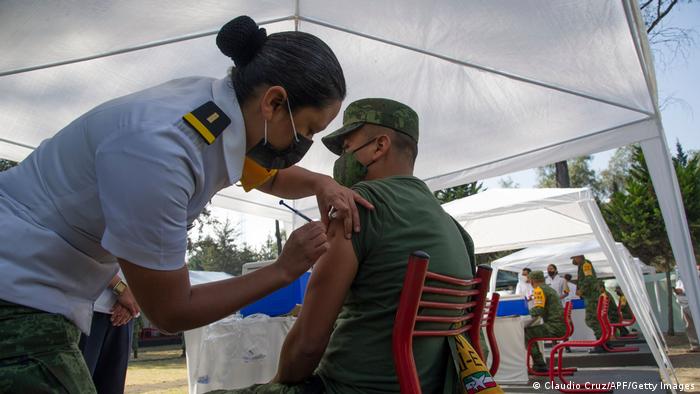 Before the first vaccine on December 24, medical personnel conducted a full-scale mock vaccination drill with the military

Infection rates, however, tell a different story. Every day, 12,000 new cases are reported in the country — twice as many as during the summer months. So far, over 118,000 people have died from COVID-19-related health problems. At least 1.3 million Mexicans have contracted the virus.

"It is great news that the vaccination program is now starting," Malaquias Lopez Cervantes, a professor of medicine at the National Autonomous University of Mexico (UNAM), told DW. But the public health expert also has concerns. "The vaccination program has a few doses for a small target group only," Lopez Cervantes said. "The next steps are unclear." He said several hurdles remain to achieving a comprehensive immunization of the Mexican people.

Mexico's military is in charge of running the vaccination program, which began on December 24. The country has begun administering the first 3,000 doses of the newly approved Pfizer-BioNTech vaccine. For now, only medical staff in two out of Mexico's 32 states — Mexico city and the northern state of Coahuila — will be vaccinated. While the densely populated capital, with its 8.8 million residents, has been a coronavirus hot spot, it is unclear why the other state was chosen as there is no more urgent medical necessity to begin vaccinating people in Coahuila as opposed to anywhere else, said Lopez Cervantes.

Amid COVID, a somber Day of the Dead in Mexico

Amid COVID, a somber Day of the Dead in Mexico

The government plans to have all medical staff tending to COVID-19 patients vaccinated by February 2021. By April, it wants to have have all remaining health care workers, along with Mexicans aged 60 and over, vaccinated. By May, Mexicans above the age of 50 will be vaccinated, followed by those over 40 in June. The goal is to vaccinate everyone else by March 2022. President Lopez Obrador has promised the shot will be free of charge.

It is unclear, however, whether and when sufficient quantities of the vaccine will become available for all 126 million Mexicans. The country has agreed to buy at least 7 million vaccine doses from Pfizer, though it remains uncertain when they will be delivered. Mexico has also agreed to buy 35 million doses from Chinese company CanSino, which is already testing its vaccine candidate on 6,000 Mexican volunteers. So far, however, the vaccine has not yet been approved in Mexico. Johnson & Johnson similarly launched final stage vaccine tests in Mexico in late November. Britain's Astra-Zeneca plans to establish a logistics hub in Mexico to distribute its vaccine once it is approved. It plans to offer 77 million doses.

"Possessing the vaccine is one thing, but administering it is the real bottleneck," said Lopez Cervantes. "I know this from normal flu vaccinations, where people are willing to get the shot but do not fully understand where they need to go and when, which can lead to massive groups of people waiting, losing patience and never coming back."

That kind of confusion could prove risky. The Pfizer-BioNTech vaccine, for example, is highly sensitive. It can only be stored at minus 70 degrees Celsius and, once thawed, must be administered within five days. Each individual must receive two shots. 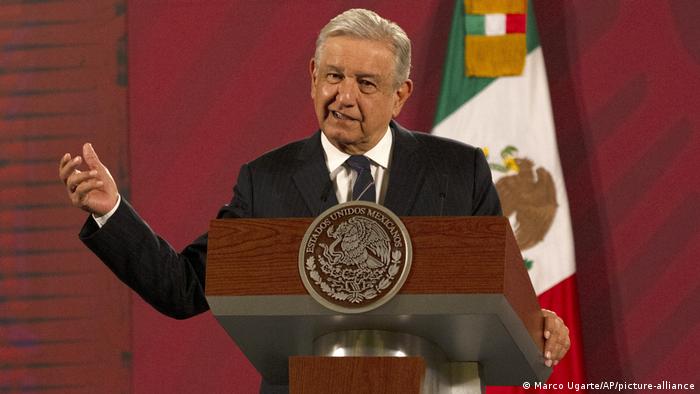 Could politics get in the way of President Lopez Obrador's vaccine plans?

For now, Mexico's military is responsible for all logistical matters. Mexicans will receive their vaccinations in military barracks. It is an "unusual scheme," said Lopez Cervantes. This is because the armed forces have neither enough personnel, nor facilities, to carry out this large scale vaccination program. It would be sensible to coordinate the program with Mexico's public health departments, governors and mayors. "Running this vaccination program in a centralistic, vertical fashion will cause complications," said Lopez Cervantes.

Yet President Lopez Obrador is no longer on good terms with many Mexican opposition governors — and even some of his fellow party members. This could further complicate the vaccination program.

According to a poll published by Mexican newspaper El Financiero, 31% of Mexicans want to get vaccinated as soon as possible, while 55% plan to wait and see. A mere 10% reject the vaccination program.

A previous version of this article stated that Mexico's vaccination program of 125,000 initial doses began on December 22. Additionally, a photo of mock vaccination drill was misidentified. This has now been corrected. The department apologizes for the error.