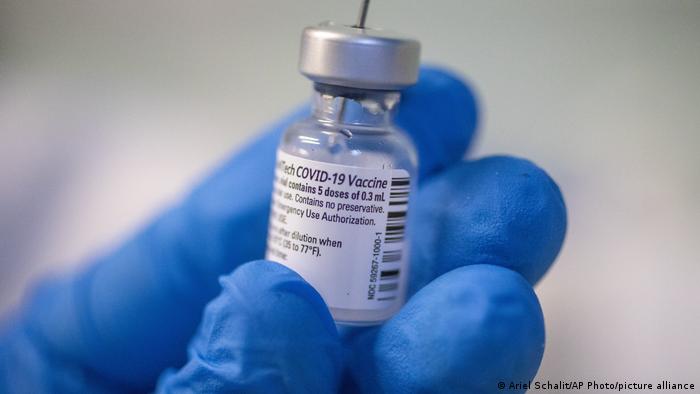 The European Medicines Agency (EMA) and the European Commission approved the BioNTech-Pfizer coronavirus vaccine on Monday. It means the mass vaccination of some 450 million people across the EU is one step closer.

The EMA's positive assessment of the vaccine was widely expected. EU countries are currently grappling with a fierce second wave of the virus.

The Amsterdam-based drug regulator was under pressure from European countries, including Germany, to speed up its decision, which was originally scheduled for December 29.

"We granted conditional market authorization to the vaccine produced by BioNTech and Pfizer," European Commission President Ursula von der Leyen said in a statement, just hours after the EMA recommendation to approve the vaccine. "I have always said during this pandemic that we are in this together."

The EMA recommendation applies to those 16 years of age and older, EMA head Emer Cooke said.

"It is a significant step forward in our fight against this pandemic, which is causing suffering and hardship for so many people, not just in Europe but all over the world," she said. "This is really a historic scientific achievement. Within less than a year, a vaccine will have been developed and authorized against a new disease."

Aside from age, limitations also apply to pregnant women. As only limited data is available for that group, it should be assessed on a case-by-case basis whether it would be safe to give a jab, said Harald Enzmann, Chair of EMA Human Medicines Committee.

"Today is a particularly personal and emotional day for us at BioNTech," said Ugur Sahin, the company's chief executive and co-founder. "Being in the heart of the EU, we are thrilled to be one step closer to potentially delivering the first vaccine in Europe to help combat this devastating pandemic."

He said on Twitter that by the end of this year, a total of more than 1.3 million vaccine doses should be delivered to Germany's 16 states. The first to be vaccinated in a campaign starting December 27 will be those over 80 years of age, nursing home staff and residents, as well as health care workers at very high risk of infection.

Preparations for the vaccine rollout come as the identification of a highly infectious new strain of the coronavirus in Britain caused chaos across the region, with countries shutting off travel ties with the UK and disrupting trade ahead of the Christmas holiday.

EMA officials told a news briefing that it was highly likely the vaccine would work against the new variant of the coronavirus.

"It is very likely that the vaccine will retain protection also against this new variant," said Marco Cavaleri, Head of Biological Health Threats and Vaccines Strategy for EMA.

While acknowledging that the agency did not yet have evidence with respect to the new strain, the vaccine generated antibodies that could neutralize different variants with mutations.

"For the time being, we are not too worried," he said.

The pharmaceutical companies will also need to submit follow-up data on their vaccine for the next year.

EMA said it had worked around the clock but needed to make sure the vaccine was safe and effective before giving its approval.

Which countries have approved the vaccine already?

Criticism of the EMA had grown after both UK and US regulators gave the vaccine the green light and began their vaccination drives in the past weeks. The US has now approved a second vaccine, manufactured by pharma firm Moderna.

The EMA has said it would speed up its authorization decision on Moderna's vaccine to January 6, six days sooner than planned.

What is the BioNTech-Pfizer vaccine?

It has proven to be 95% effective against COVID-19 in global trials. It involves two doses that are injected three weeks apart.

Transporting can pose logistical challenges, as it must be stored at -70 degrees Celsius (-94 degrees Fahrenheit), a temperature much lower than standard freezers and which forced the company to develop special containers for transport.