The German president called getting vaccinated "an act of solidarity." Meanwhile, EMA approved use of the BioNTech-Pfizer vaccine as a new strain of COVID-19 in the UK has led to travel bans. Follow DW for the latest. German President Frank-Walter Steinmeier on Monday said the introduction of the newly approved BioNTech-Pfizer coronavirus vaccination would be "a day of hope" and told citizens that getting inoculated against the deadly virus was an "act of solidarity with all of humanity." Steinmeier said broad immunization was needed to stop the spread of a virus that has killed more than 20,000 people in Germany — with 10,000 dying in the first three weeks of December alone. He added that the government has no plans for compulsory immunization.

The president also announced that Germany would hold a special memorial service honoring the lives of those killed by the pandemic. He said that he "will speak with other branches of government to find an appropriate date next year." Not only will victims be remembered, instead Steinmeier said the act would show support and empathy for all those whom they left behind as well as those still battling the disease.

The European Medicines Agency (EMA) and the European Commission  approved the use of the BioNTech-Pfizer vaccine.

Germany, Austria and Italy have said they plan to begin rolling out their vaccination campaigns on December 27.

Countries across the globe have closed their borders to entrants from the United Kingdom as fears continued to grow over the emergence of a new variant of the coronavirus that has been circulating around Britain. On Monday, the EU imposed a travel ban on the UK until midnight Tuesday.

In Germany, the death toll for December has passed 10,000 — making it the deadliest month of the pandemic so far.

The December total of 10,027 fatalities recorded by the Robert Koch Institute (RKI) is nearly double November's death toll of 5,796.

The Vatican said that it is "morally acceptable" for Roman Catholics to receive COVID-19 vaccines based on research that used cells derived from aborted fetuses, guidance that came after some churchmen in the United States argued that such products were immoral.

US lawmakers have reached a deal to finalize a $900-billion (€735-billion) economic relief package that would deliver long-overdue help to businesses and individuals hit by the pandemic.

"We've agreed to a package of nearly $900 billion. It is packed with targeted policies to help struggling Americans who have already waited too long," Republican Senate Majority Leader Mitch McConnell said in a statement.

Meanwhile, US President-elect Joe Biden has received the first of the necessary two jabs of the coronavirus vaccine. 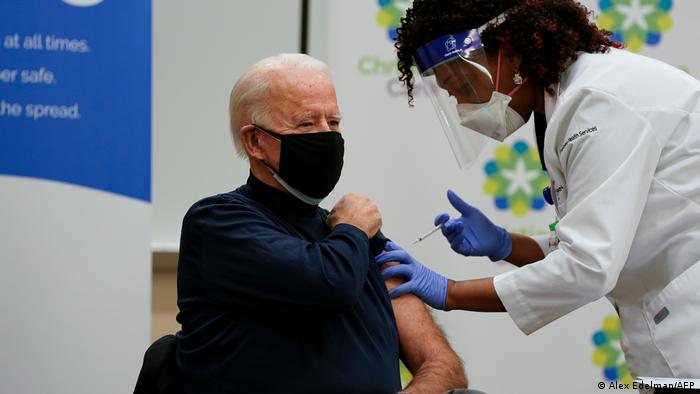 The Qatar Ministry of Public Health has approved the BioNTech-Pfizer vaccine for emergency use, state news agency QNA reported on Twitter.

The country is set to receive the first shipment of the vaccine on Monday.

South Korea has reported its highest daily death toll from the coronavirus, according to the country's health authorities.

The recent surge in cases has confounded efforts to curb the spread of the virus and the country is running short of hospital beds.

As of Sunday, there were just four intensive care unit beds still available in the greater Seoul area, according to health officials.

Seoul police and health investigators have been carrying out late-night raids, targeting bars and karaoke clubs suspected of flouting social distancing measures, the capital city said in a statement.

Amid a nursing staff shortage, German hospitals have had to take matters into their own hands. When the coronavirus pandemic hit, a new arrival from Mexico proved very valuable at Berlin's well-known Charite Hospital.