Coronavirus: What we know about the UK's new COVID strain

A new variant of the coronavirus is sweeping across London and southern England. Scientists believe it is significantly more contagious than other strains. Here's what we know so far. 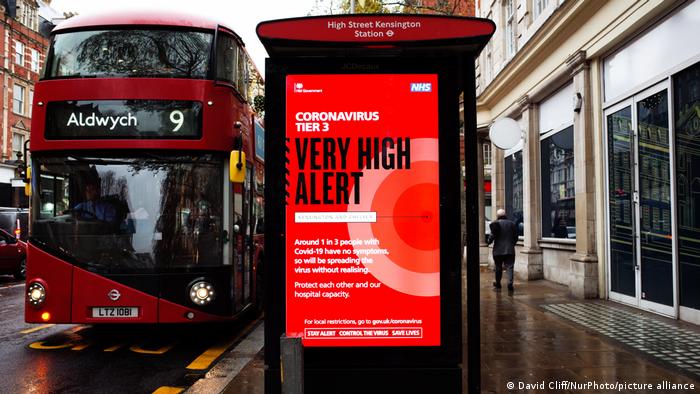 The British government has warned the public to stay home

A new strain of coronavirus is sweeping across southern England, spurring heightened restrictions in the region and flight bans within Europe and globally.

So what do we know about the new virus mutation?

Over the weekend, British Prime Minister Boris Johnson said the fast-moving new variant of the virus is 70% more transmissible than existing strains, and appears to be driving a rapid spike in new infections in London and southern England.

However, "there's no evidence to suggest it is more lethal or causes more severe illness," or that vaccines would be less effective against it, he said.

Britain has alerted the World Health Organization that the new strain — identified last week — is the likely cause of the surge in infections, accounting for around 60% of London's cases.

Just over 1,100 COVID-19 cases with the new variant had been identified as of Sunday, according to a statement from Public Health England. The strain was also detected in South Africa last week.

In response to the surge, Johnson has announced a stay-at-home order for the capital and southeast England until at least December 30 to slow the spread of the disease.

"We're learning about it as we go, but we already know enough, more than enough, to be sure that we must act now," Johnson said during a press conference on Saturday. "When the virus changes its method of attack, we must change our method of defense."

"Given how much faster this new variant spreads, it's going to be very difficult to keep it under control until we have the vaccine rolled out," Health Minister Matt Hancock told Sky News on Sunday.

Virus mutations are not unusual, and scientists have already found thousands of different mutations among coronavirus samples. However, the majority of these mutations have no effect on how easily the virus spreads or the severity of the symptoms.

Last month, millions of mink were discovered to be carrying a variant of COVID-19. In October, researchers also found evidence that a coronavirus variant had originated in Spain and spread through Europe. However, neither of the strains were found to increase the spread of the disease.

When the UK's new strain was first detected last week, health officials were debating whether the rapid spread of the virus was due to widespread carelessness or the contagiousness of the strain itself. After further investigation, scientists found that the new strain is, in fact, significantly more transmissible.

However, they don't believe the variant leads to an increase in cases of severe illness or more serious side effects.

Researchers are still evaluating whether the strain will be more or less receptive to the vaccines currently being rolled out. No formal conclusions have been made, although health authorities have said it is unlikely that the mutation would hinder the vaccines' effectiveness.

Richard Neher of the University of Basel's Biozentrum in Switzerland has said vaccines generate an immune response against several virus characteristics at the same time. Therefore, even if one of those characteristics changes, the immune system would still be able to recognize the pathogen and protect the vaccine recipient.

"I don't see any reason for alarm at the moment," Neher told the dpa news agency, adding that it was still necessary to monitor further developments.

In response to the rapid spread of the virus in the United Kingdom, the Netherlands has banned all passenger flights from Britain until at least January 1. The ban, which took effect at 6 a.m. (5 a.m. GMT) on Sunday, came just hours after Britain announced the new stay-at-home order.

The Dutch public health body, the RIVM, recommended "that any introduction of this virus strain from the United Kingdom be limited as much as possible by limiting and/or controlling passenger movements."

"Over the next few days, together with other EU member states, [the government] will explore the scope of further limiting the risk of the new strain of the virus being brought over from the UK," the statement said.

Germany has recorded almost 10,000 coronavirus deaths in December, and is on course to see the number of fatalities double from last month. The second wave is proving to be significantly more deadly than the first.