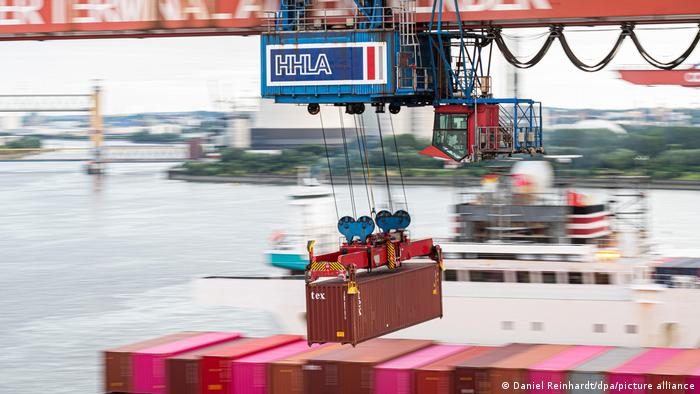 The Port of Felixstowe on England's eastern coast has for months struggled to process thousands of shipping containers delivering vital goods for the pandemic-hit UK economy.

The abrupt halt to world trade when the coronavirus first struck earlier this year, left the port — which processes around 40% of the UK's container traffic — facing an unprecedented crisis.

Pressured to accommodate thousands of empty shipping containers, Felixstowe also had to prioritize the hasty arrival of personal protective equipment (PPE) meant for hospitals, including medical gowns, masks and visors. Eleven months after COVID-19 was first reported in the country, a mountain of PPE is still sitting at the port.

If the pandemic wasn't enough, Britain's departure from the European Union is further exacerbating the congestion. Supermarkets, the National Health Service (NHS) and manufacturers have been stockpiling food, medicine and parts, in case of delays to imports caused by a messy end to the Brexit transition period at the end of December.

Zoe McLernon, policy manager at the freight transport association Logistics UK, told DW that companies want to "have a buffer in their stocks ahead of January 1." She said the gridlock had spilled over to the UK's non-container ports.

Dubbed Bottleneck Britain, the delays have forced Japanese automaker Honda to temporarily halt production at its factory in England due to a shortage of parts. Swedish retailer, Ikea, this week apologized to its customers for delays to furniture deliveries because of the port holdups.

Britain's children, meanwhile, could have plenty to complain about if their Christmas presents are still stuck in storage come December 25.

Any port in a storm

Toy manufacturers' association BTHA has warned that ships carrying toys and gadgets have been diverted to Rotterdam. The shipments will have to be transported the remainder of the journey by truck and may not make it in time. 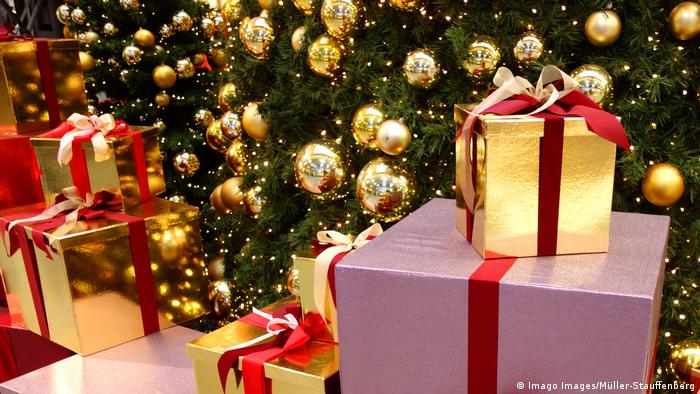 The extraordinary port congestion is playing out in a similar manner around the world, including Sydney and Los Angeles, compounded by the abrupt shutdown of economies at different times this year.

Roughly 60% of global goods move by container, and according to the China Container Industry Association (CCIA), average turnaround times have ballooned to 100 days from 60 days previously because of handling capacity cuts in Europe and the US.

China, the world's No. 1 manufacturer, and where the coronavirus first emerged, appears to have already rebooted its economy. Factories there are humming again and Chinese exports surged 21% in November from a year ago.

Demand for 'Made In China' goods from Europe and the United States has changed somewhat during the pandemic. With entire populations confined to their own homes, orders for furniture, fitness equipment, electronics and IT for working from home have boomed.

Rolf Habben Jansen, the head of Germany's largest shipping company, Hapag-Lloyd, told the Frankfurter Allgemeine Zeitung that the delays at US ports had forced some ships to wait up to a week to unload their cargo. In general, the Hamburg-based company expects around 10% of its deliveries to be delayed.

Hapag-Lloyd has been accused of exacerbating the crisis by sending empty containers from the US to China when they were supposed to be loaded with soybeans and other farm goods for the Chinese market. As a result, a third of US soybean farmers were left sitting on part of their harvest.

The firm blamed the need to make up for lost time on the return journey, as eight times more freight is sent from China to the US than in the opposite direction. 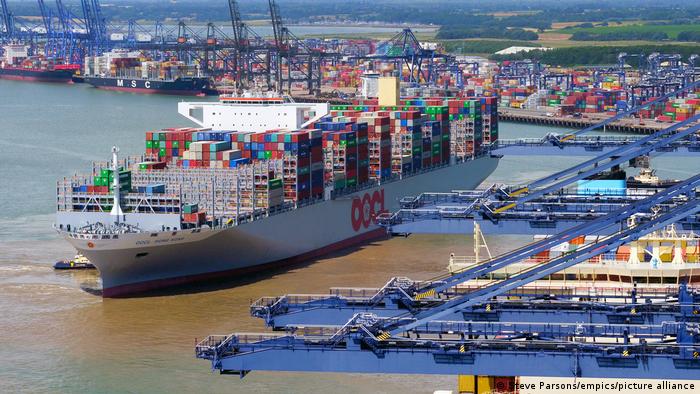 A vessel from Hong Kong's OOCL, the world's largest container shipping firm, seen here at the Port of Felixstowe

The shortage of cargo ships and similar bottlenecks at other ports has sparked extra demand for air and rail freight. Some shipping firms are now using trucks to deliver goods to European markets, despite the great distance from China. And this extreme measure is unable to make up for the lack of capacity by sea.

Airfreight capacity is also reaching its limit, partly due to the lack of flights operating during the pandemic. Most passenger planes also carry freight as part of a long-established practice to boost airlines' revenues. However, global air traffic is down around 60% this year. Many routes are no longer operating and popular connecting flights have been cut back.

Another alternative to shipping is transporting by rail. Thanks to Beijing's investment in the Belt and Road initiative, dubbed the New Silk Road, there are now continuous rail links between China and Western Europe. But rail freight forwarders are already at capacity, according to DB Schenker, the logistics arm of Germany's national rail company, Deutsche Bahn. Even then, a cargo ship can carry 24,000 standard containers (TEU) which is as many as 300 freight trains. 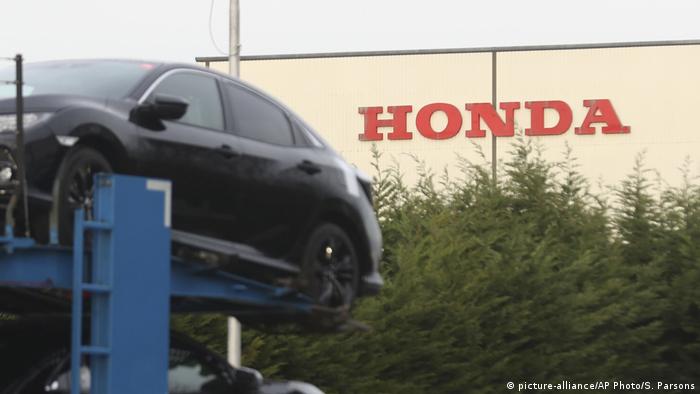 While supply is scarce but demand is high, prices tend to rise. This is being observed right now, although the impact is not yet being felt because many shipping contracts are long-term and fixed-price. According to Hapag-Lloyd's Habben Jansen, average freight rates are still at last year's level.

Freightos data in Refinitiv Eikon shows an 85% spike in rates from China to the US East Coast since June 1, while rates to Europe have jumped 142% over the same period, and by 103% to the Mediterranean via the Suez Canal.

"It's been described to me as like a casino," Nicolette van der Jagt, director general of the European freight-forwarders' association CLECAT, told DW. She added that there was evidence that shipping giants were profiteering from the crisis.

"Large carriers have the ability to manipulate the market by reducing sailings," she said, adding that they had monopolies in several markets where the cost of entering the sector was too expensive.

The ports bottleneck is not expected to ease until early next year, and could last much longer in Britain, if the country exits the Brexit transition period without a deal with its largest trading partner, the EU.

McLernon from Logistics UK says they won't know the full impact of a no-deal scenario on congestion unless it happens but that a trade agreement would still lead to some delays.

“We believe we're over the peak of the congestion issues for now," she told DW but argued the delays might last well into 2021.

Dirk Kaufmann contributed to this article.

Brexit: A tired Britain prepares for a new era

No one knows what the UK will look like as the transitional period nears its end. What is certain is that Brexit is no longer at the heart of the public discourse.