Coronavirus digest: Japan to lift state of emergency for the first time since April

Japan's medical experts and officials warned that lifting restrictions didn't mean they were out of the woods. Meanwhile, India has reported its smallest number of COVID cases since mid-March. Follow DW for the latest. 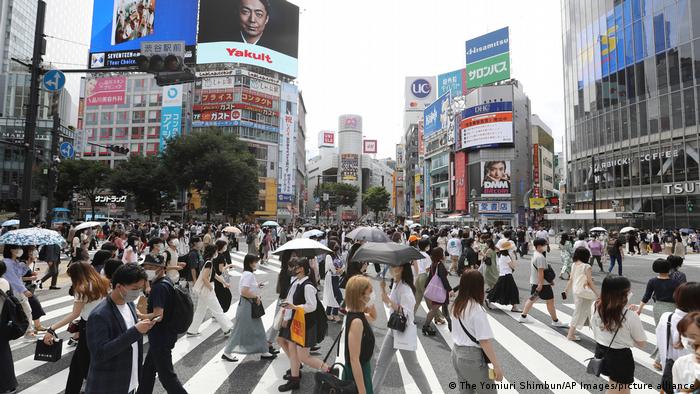 His announcement came after officials in charge of the country's pandemic response got backing from medical experts to gradually ease restrictions.

The emergency restrictions, which included curbs on nonessential gatherings, are due to expire on Thursday.

The government will not renew the restrictions, but will leave it up to governors of each prefecture to decide on the rules that would stay in place to prevent a surge in cases, Kyodo news agency reported.

"The number of new coronavirus cases and patients with severe symptoms have dramatically declined," Suga said on Tuesday. Japan will enhance its response to the pandemic by increasing vaccinations and enhancing health care systems, Suga added.

This would be the first time in over six months that Japan will not be under a state of emergency. The emergency measures have mainly been in the form of requests for bars and restaurants to operate for shorter hours and not serve alcohol.

Yasutoshi Nishimura, the official responsible for Japan's coronavirus response, said serving alcohol would be made possible going forward, but "governors will decide on that appropriately."

Nishimura also mentioned that the maximum number of spectators allowed for major sporting events would be increased to 10,000 or 50% of the venue's capacity, from the current cap of 5,000 people.

Japan's current state of emergency, which was declared in April, was repeatedly extended and expanded. Infections started to worsen in July and peaked in mid-August after the Tokyo Olympics. Suga decided to step down from party leadership after intense criticism over his handling of the pandemic during the Summer Games.

Here are the latest major developments on coronavirus around the world:

BioNTech-Pfizer submitted to the US Food and Drug Administration (FDA) preliminary trial data for COVID-19 vaccine use in five to 11-year-old children. An emergency authorization request is to follow in the coming weeks.

The BioNTech-Pfizer vaccine has already been fully approved for use for 16 and up and authorized for young teens aged 12 to 15.

French health care company Sanofi said Tuesday that it is dropping plans for its mRNA vaccine against COVID-19. The move came despite promising interim results from phase 1 and phase 2 trials, which showed a strong immune reaction in participants' blood.

Concerned about the challenges in competing against the BioNTech-Pfizer and Moderna vaccines — which are also created with mRNA technology — Sanofi said it would instead focus its efforts on its more conventional protein-based vaccine. The French firm has partnered with British company GlaxoSmithKline to produce the jab.

Previously hard-hit India has reported its lowest COVID death toll since March, with 179 deaths on Monday. It also reported the smallest increase in infections, which rose by 18,795. The official death toll now stands at 447,373 and total number of cases at 33.7 million, according to data from the Health Ministry.

Pakistan said it would begin vaccinating children aged 12 or above to protect them from coronavirus. Asad Umar, the official in charge of implementing the country's COVID response, said the inoculation drive would be launched in schools, though he didn't mention when it would begin. The news came after Pakistan reported less than 1,500 cases for the first time since July on Tuesday.

In Australia, residents in Sydney who are not vaccinated against COVID could be barred from various social activities after stay-at-home orders completely lift in December, New South Wales state Premier Gladys Berejiklian said on Tuesday. The two-tier system, intended to ramp up vaccination, has instead drawn criticism for penalizing vulnerable groups who have not yet had access to vaccines.

New South Wales reported 863 new locally acquired cases of COVID on Tuesday, up from 787 a day earlier, as first-dose vaccination levels in the state's adult population hovered around 86%.

The government in Italy is now allowing Italian citizens to visit six non-European destinations without having to quarantine on arrival or return. The countries are Maldives, Seychilles, Mauritius, Egypt (only the tourist resorts of Sharm el-Sheikh and Marsa Alam), Dominican Republic and Aruba.

Italians leaving for those destinations must show proof of vaccination or a negative test at least 48 hours before their flight.

New York hospitals began firing or suspending health care workers on Monday for defying a state order to get vaccinated. New York City Mayor Bill de Blasio said he wasn't seeing a major impact from the COVID vaccine mandate, adding that he worried about other areas of the state with a much lower vaccination rate. 63.5% of the state's adult population has been fully vaccinated so far.

US President Joe Biden has rolled up his shirt sleeve once again. This time it was to receive his booster shot, as he hopes to provide a powerful example for Americans on the need to get the extra dose.

At least 400,000 people in the US have received a booster dose of the BioNTech-Pfizer vaccine, the White House said Tuesday.

In Brazil, Pfizer Inc. has asked health regulator Anvisa to approve a booster shot of its vaccine, which it produced jointly with BioNTech. The booster shot could be given to people 12-years-old and up.

Authorities in Costa Rica on Tuesday announced that all government workers in the country will be required to be vaccinated. There are some 300,000 public employees in the country.

Hospitals in Sydney have begun setting up treatment units in tents to treat an influx of COVID patients. Meanwhile, Japan has halted use of over 1 million vaccine doses over contamination concerns. Follow DW for more.