The move came "out of an abundance of caution" after reported contamination in some of Moderna's coronavirus vaccine vials in Japan, the company said. 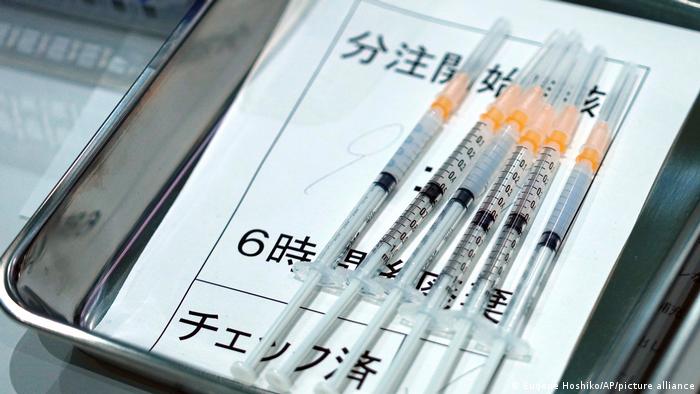 Japan's Health Ministry suspended the use of around 1.63 million doses of Moderna's COVID vaccine on Thursday.

The country heavily relies on Moderna shots to vaccinate its population. After a sluggish start to its program, Japan has picked up the pace of vaccination, administering 1 million doses a day.

Why did Japan suspend the Moderna jab?

Both Japan and Moderna said the suspension was a precaution and that no safety or efficacy issues related to the contaminated doses had been identified.

The Health Ministry said it found "foreign materials" in some vials.

Moderna said it was "out of an abundance of caution" that it put those lots on hold.

Japanese Prime Minister Yoshihide Suga, who faces a leadership contest next month, said the incident would not hamper the country's vaccination goals.

Suga said he aimed at vaccinating 60% of the population by the end of September. Currently, 43% of Japan's population has been fully vaccinated.

When did officials find out about the contamination?

A Japanese Health Ministry official said that Takeda Pharmaceuticals, responsible for the sale and distribution of Moderna shots in Japan, first knew about potentially contaminated shots on August 16.

It collected reports about which vials were affected and where they were in Japan before raising the issue to the government.

The Moderna shots are typically made available at work places and large vaccination centers.

Even though the government said it was working to make sure the issue had little impact on the rollout, Thursday's news prompted several Japenese companies to cancel vaccinations for their employees on the day.

Japan's Defense Ministry, which operates a mass vaccination site in Osaka, said the shots from the lot in question had been used in the western prefecture between August 6 and 20. However, no adverse effects have been reported so far.

Ask Derrick: Should countries use multiple types of vaccine?

How did Moderna react?

Moderna said in a statement that it had been notified of "cases of particulate matter being seen in drug product vials of its COVID-19 vaccine."

It said it was investigating the report and remained committed to working with Japan. The company added that contamination could have likely been due to a manufacturing issue in one of the production lines at its contract manufacturing site in Spain.

Spanish pharma company Rovi said the potential contamination of some doses of the jab it manufactures for Moderna was under investigation and appeared limited to some batches for Japan.

It is not clear whether other countries are going to be affected by the issue.

Three prefectures neighboring Tokyo are set to re-impose states of emergency as the Delta variant spreads. More than 70% of new COVID cases in Tokyo are of the highly contagious variant.