The worst-hit country in the Middle East has started inoculations with Russia's Sputnik V vaccine. Meanwhile, France logged its highest number of intensive care patients in two months. Follow DW for the latest. 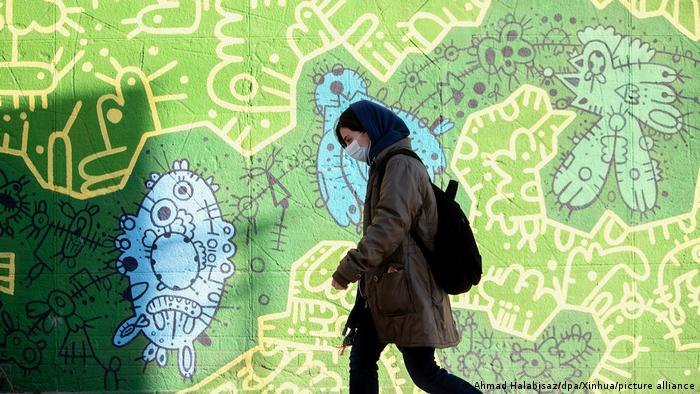 Iranian health workers are first in line to get the jab

Iran launched its coronavirus vaccination campaign on Tuesday as the country seeks to curb the deadliest outbreak of the virus in the Middle East.

President Hassan Rouhani kicked off the campaign by paying tribute to the health workers who lost their lives to COVID-19 during a ceremony at a Tehran hospital.

In footage broadcast by state television, Rouhani said Iran had begun its national vaccination campaign in "memory of the martyrdom of health workers."

Iran, with a population of over 80 million, is using Russia's Sputnik V vaccine to start its vaccination drive. The "top priority groups" for getting the jab are doctors and nurses working in intensive care units, Iran's state-run news agency IRNA reported.

Iranian authorities hope to eventually use its own locally-developed vaccines. Clinical trials for one candidate began in December, while unveiled a second vaccine project on Monday. The country banned COVID vaccines from the United States and the United Kingdom earlier this year.

Read on for all the latest coronavirus news from around the world.

German exports contracted by 9.3% in 2020 as the coronavirus pandemic has slammed global trade. Data released on Tuesday by the Federal Statistical Office data showed a sharp decline in global demand for German products as 2020 came to an end. Europe's biggest economy recorded a trade balance of €16.1 billion euros ($19.5 billion) in December 2020.

The number of new daily coronavirus cases in Germany rose by 3,379 according to the latest data released by the Robert  Robert Koch Institute (RKI) for infectious diseases. The figure was down slightly compared to the previous day, with Germany still under strict lockdown restrictions.

France has so far inoculated 1.92 million people with the coronavirus vaccine. The number of COVID-19 patients in intensive units reached 3,363 on Monday, the highest in more than two months.

In Greece, Prime Minister Kyriakos Mitsotakis on Tuesday announced a strict lockdown in the capital, Athens, amid a surge in cases. All non-essential shops and schools in Athens will be closed from Thursday, Feb. 11 through the end of the month. Greek health authorities registered 1,526 new cases on Tuesday, with half of the new infections coming from the greater Athens area.

In Myanmar, testing for coronavirus has collapsed as doctors and health workers lead a civil disobedience movement against the recent military coup. On Monday only 1,987 tests were conducted compared to 17,000 a day in the week before the coup.

Myanmar is one of the worst affected countries by the pandemic in Southeast Asia. Over 141,000 people have been infected, while over 3,100 have died from the virus.

The number of newborns in China in 2020 has fallen by 15% compared to 2019. The disruption of the economy by the coronavirus pandemic is believed to have weighed heavily on decisions to have a family or not. China reported just over 10 million births last year compared to 11.79 million in 2019.

Pakistan has approved Russia's Sputnik V coronavirus vaccine for emergency use. The vaccine is administered in two shots, three weeks apart. It has a shelf life of six months and is stored at -18 Celsius. Sputnik V's approval by the South Asian country comes after its approval of China's Sinopharm and the AstraZeneca COVID-19 vaccines. Pakistan has become the 22nd country to approve the Russian vaccine.

India has ordered 10 million more doses of the AstraZeneca coronavirus vaccine from the Serum Institute of India. It has also placed an order of 4.5 million doses of home-grown Bharat Biotech vaccines.

The Serum Institute had earlier supplied 11 million doses to India. The doses were administered to 6.3 million front-line workers.

Bharat Biotech, which is developing its vaccine with the state-run Indian Council of Medical Research, has already supplied 5.5 million doses.

India has so far recorded 10.85 million cases of coronavirus, the world's second-highest number after the US. So far 155,000 people have lost their lives due to COVID-19. The world's second-most populated country started its inoculation campaign on January 16.

Ethiopia has secured nine million doses of coronavirus vaccine. The country aims to inoculate at least a fifth of its 110 million people by the end of this year. Ethiopia was not procuring the vaccine doses independently but only through the global COVAX scheme which is the WHO-backed effort to secure and distribute the jabs to poorer countries. Health Minister Lia Tadesse said that her country was open to possible donations of vaccines by other countries.

A team from the World Health Organization (WHO) says it had not yet found the mammalian host responsible for transmitting the disease to humans. Investigators on Tuesday said they were still trying to find the animal vector through which the COVID-19 virus was transmitted to humans.

Scientists believe the disease originated in bats, but the WHO team visiting the Chinese city of Wuhan is looking into how it could have made the jump to humans via another mammal. WHO virus expert Peter Ben says that work to identify the origins of the coronavirus pointed to a natural reservoir in bats. But, he said the absence of bat environments in Wuhan indicated that it had been transmitted to humans through another animal.