The number was reached as officials consider tougher measures. Brazil's air force delivered oxygen supplies to the jungle state of Amazonas. Follow DW for the latest. 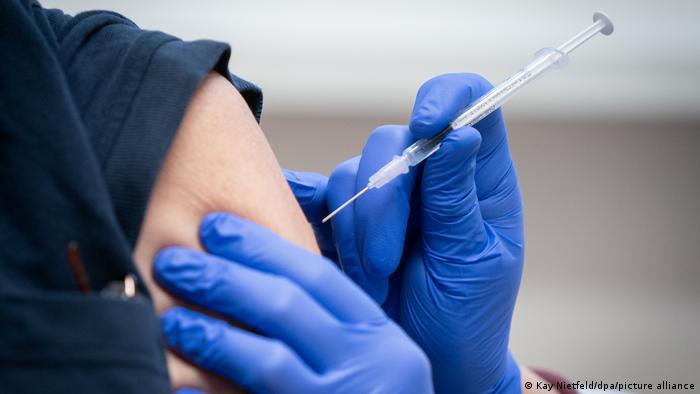 Germany's health minister admitted vaccinations could have been going smoother

Germany has delivered more than 1 million first-round doses of COVID-19 vaccines, as new infections and deaths continues to increase. Despite the new figure, critics have said that the country's rollout of the vaccine has been too slow.

Health Minister Jens Spahn has said he expects that everyone in Germany will have been offered the vaccine by summer.

"Some things could have been done faster," he said. "Of course, there are hiccups in the biggest vaccination campaign in history." However, he said, "we will be rewarded for our patience."

Here's a roundup of the other major developments around the world.

United Nations chief Antonio Guterres has urged the world to mark the "heart-wrenching milestone" of 2 million deaths from COVID-19 by acting with far greater solidarity to ensure that vaccines are available and affordable in all countries.

The secretary-general said in a video message posted Friday that governments have a responsibility to protect their people, "but 'vaccine nationalism' is self-defeating and will delay a global recovery."

Guterres reminded the world's wealthiest economies of what he said was a special responsibility to support the World Health Organization's COVAX program to buy and deliver vaccines for the world's poorest people.

He also urged rich nations to share excess doses of vaccines, noting that "some countries are pursuing side deals, even procuring beyond need."

India has launched its mammoth vaccination drive, as the country tries to bring the pandemic under control with two locally-produced vaccines.

Prime Minister Narendra Modi formally kicked off the "world's largest" vaccination campaign in a video address to the nation.

"Normally, it takes many years to make a vaccine but in such a short span of time, not one, but two 'Made in India' vaccines are ready," Modi said in a speech.

On the first day, 100 people will be vaccinated in each of the more than 3,000 government centers across the country.

Around 30 million healthcare and designated frontline workers, such as sanitation and security workers, will be the first to receive their dose.

China has built a 1,500-room hospital for COVID-19 patients in just five days after a spike of infections was reported in a city south of Beijing.

The hospital is the first of six with a total of 6,500 rooms being built in Nangong in Hebei province, the Xinhua News Agency said Saturday.

The temporary facilities are due to be completed within the next week.

Health authorities have placed more than 28 million people in the northeast into lockdown as they battle a new wave of the coronavirus in Nangong and the Hebei provincial capital of Shijiazhuang.

Cambodia will receive one million doses of China's coronavirus vaccine, thanks to a donation from Beijing, the kingdom's strongman premier Hun Sen said late Friday.

"Friend China is helping us with one million doses," he said in a Facebook audio message, adding that the doses made by the firm Sinovac will vaccinate 500,000 people.

The first people to get the jab would include frontline health workers, teachers, soldiers, the premier's bodyguards, and officials around the king, he said.

Beijing has also offered to help another nation in the region, with Chinese Foreign Minister Wang Yi promising this week to provide 300,000 doses to Myanmar.

Germany's BioNTech has promised a speedy return to vaccine deliveries across Europe after its partner Pfizer announced weeks of production delays.

"Starting the week of Jan. 25, we will return to the original schedule for deliveries," BioNTech said Friday.

The firm said once the original commitment to European countries had been fulfilled in mid-February, deliveries would be ramped up.

"We will be able to deliver the full committed volume of vaccine doses in the first quarter and significantly more in the second quarter," the firm said in a statement.

Germany's health ministry said Friday that Pfizer would reduce deliveries for three to four weeks due to essential maintenance work that would help boost production at the Pfizer plant in Puurs, Belgium

In addition, plans for a new BioNTech production facility at Marburg, in the state of Hesse, got the green light from German authorities on Friday.

Meanwhile, the number of confirmed coronavirus cases in Germany increased by 18,678 to 2,019,636, data from the Robert Koch Institute (RKI) for infectious diseases showed on Saturday. The reported death toll rose by 980 to 45,974, the tally showed.

Chancellor Angela Merkel and the nation's 16 state premiers are to hold their latest round of lockdown talks on Tuesday, almost a week sooner than originally planned, government spokesman Steffen Seibert announced Friday.

The current lockdown, which includes sweeping closures of businesses and tough restrictions on socializing and travel, is currently set to expire at the end of the month, although it is broadly expected to be extended and even intensified.

In Spain, parliamentary elections in the restive region of Catalonia have been postponed by more than three months due to the pandemic.

The decree to postpone the vote was approved at a cabinet meeting on Friday, the regional government in Barcelona announced.

The vote considered key due to the still-smoldering conflict over the region's wish for independence from Spain.

Denmark found its first case of the highly contagious coronavirus variant originally found in South Africa. The country also saw a rise in the number of infections with the highly transmissible B117 variant first identified in Britain, health authorities said.

The Nordic nation extended a lockdown for three weeks on Wednesday in an effort to curb the spread of the new UK variant, which authorities expect to be the dominant one by mid-February.

France began observing a 12-hour curfew, from 6 a.m. until 6 p.m. The curfew was brought forward two hours, from its original timeframe of 8 p.m. to 6 a.m. Additionally, from Monday, anyone traveling to France from outside the European Union will have to show a negative test result and self-isolate for a week upon arrival.

Around 10,000 people rallied in Vienna, Austria, to protest coronavirus restrictions, and called on the government to resign, Austrian police said. The Alpine country is currently in its third lockdown since March, with non-essential shops, concert halls and theaters, sports centers and schools closed.

Portugal's Finance Minister Joao Leao tested positive for the virus, a day after he took part in an in-person meeting in Lisbon with top EU officials including EU Commission chief Ursula von der Leyen. Leao, 46, has so far shown no symptoms and will continue to work from home during a period of self-isolation, a statement from his ministry said.

Brazil on Friday sent emergency oxygen supplies to the northern state of Amazonas devastated by a resurgent coronavirus pandemic.

The Air Force flew cylinders with 9,300 kilos of oxygen from Sao Paulo state with another cargo expected shortly afterward.

According to local media reports, families of seriously ill patients have been trying to buy oxygen tanks on the black market, due to a massive shortage at hospitals.

Desperate relatives, protesting outside hospitals in the state capital of Manaus, said patients had been taken off ventilators as oxygen ran out.

COVID-19 patients have been transferred to other regions of Brazil due to local hospitals being overwhelmed, officials said.

US state governors have accused the Trump administration of deceiving them about the amount of COVID-19 vaccine they can expect to receive.

Several states have complained about shortages, which prompted at least one large New York healthcare system to cancel a slew of appointments.

Oregon's Governor Kate Brown said her plans to expand the vaccine rollout were now in disarray because of "deception on a national scale" by the administration.

Just 10.6 million Americans have received a shot, far short of the 20 million vaccinations the White House had promised to administer by the end of 2020.

Health and Human Services Secretary Alex Azar had said on Tuesday that the administration would release millions of doses it had been holding in reserve for booster shots in order to help spur the sluggish rollout.

Germans have again been asked to restrict their movements and contacts, yet deaths are increasing rapidly. Officials say it's because people are getting around.