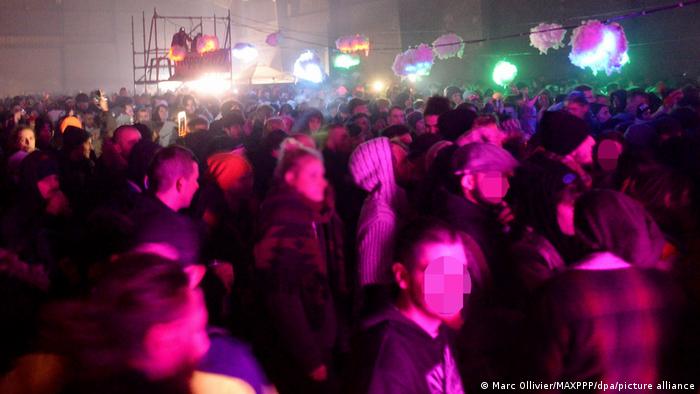 Mass gathering and curfew rules were broken during the rave, with few wearing masks

An illegal New Year's rave in northwestern France has been broken up by police, some 36 hours after it began, Interior Minister Gerald Darmanin tweeted on Saturday.

He said more than 1,200 people had been fined for not respecting the region's COVID curfew, for refraining from wearing a mask, and illegally taking part in a gathering. Five people were detained.

Sound equipment and power generators were also confiscated, he added.

The rave, involving some 2,500 revelers, occurred in Lieuron, south of Rennes in Brittany.

On Friday, police struggled to halt the party amid clashes with attendees, prompting the placing of a sanitary cordon around the venue.

Local gendarmes said they "faced fierce hostility from many partygoers" who set one of their cars on fire and threw bottles and stones. Some police officers suffered light injuries in the commotion.

One participant told French news agency AFP that the revelers met on Thursday evening in the parking lot of a shopping center before traveling to the warehouse for the rave. He said, "very few had respected social distancing" at the event, which was supposed to end on Saturday. 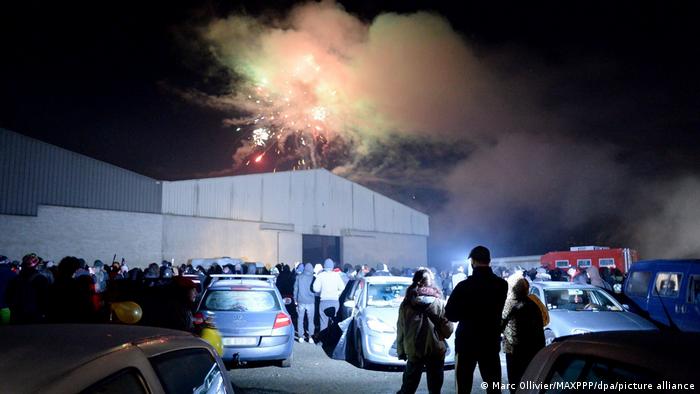 Ravers had met elsewhere before traveling on to the venue

Other participants told AFP the party included nationals from Spain and the UK. Prosecutors have launched an investigation into the rave, which could include charges of premeditated violence against people in authority.

Trying to fight the virus

France has implemented tough measures to stem the spread of COVID-19. A nationwide curfew between 8 p.m. and 6 a.m. local time (1900-0500 UTC/GMT), which was not lifted for New Year, as well as a ban on mass gatherings, have been in effect for weeks. No more than six adults could meet indoors for New Year.

According to Johns Hopkins University, more than 2.6 million people have been infected with COVID-19 in France, leading to nearly 65,000 deaths.

Other large parties took place across central Europe and were quickly broken up by authorities. Police shut down events involving some 300 people in Marseille and 100 people in Seine-et-Marne, according to AFP. Three suspected organizers of the Marseille party were arrested.

German police arrested two people early Friday after a rave in a disused bunker in the western city of Cologne. A police spokesman said about 30 people attended the gathering, which took place in a locked facility. They said they found professional sound equipment and drugs at the scene.

More than a club

Meanwhile, also on Saturday, Spanish riot police broke up a rave in an abandoned warehouse near Barcelona where 300 people had been celebrating for over 40 hours.

The party began on New Year's Eve in the village of Llinas del Valles some 30 kilometers (19 miles) northeast of the Catalonian capital, with revelers ignoring coronavirus restrictions.

Regional police said on Twitter they had confiscated the sound system and other equipment and would press charges against all who were involved.

"We will prosecute the organizers and all the partygoers," police said, indicating the penalty for attending such an event started at €3,000 ($3,650).

They added that the three organizers were arrested and were to attend court in "the coming hours." They could face a fine of up to €600,000.