With more than 42,000 new cases, France's overall tally has crossed the 1 million mark, just as curfews are widened. The Netherlands, Croatia and Bosnia-Herzegovina have all seen daily records. Follow DW for the latest. 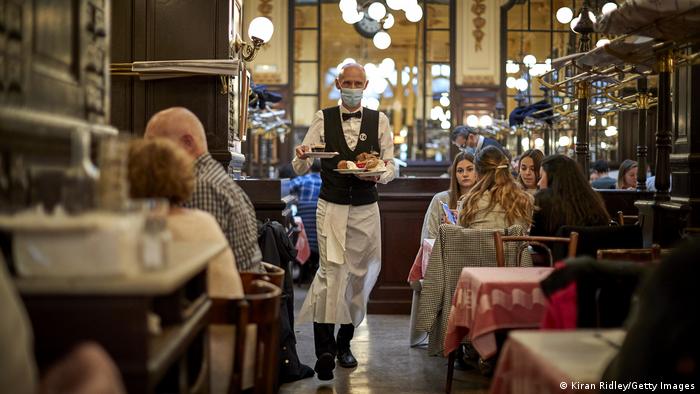 French health authorities on Friday said the country has reached over 1 million confirmed coronavirus cases, becoming the second country in Western Europe after Spain to reach that number of known infections.

The national health agency said more than 42,000 new cases had been recorded in the past 24 hours as the second wave of the pandemic takes hold.

Earlier, French President Emmanuel Macron, on a visit to a hospital near Paris, told the public to expect the virus to remain for several more months.

"When I listen to scientists I see that projections are for at best until next Summer," he said, adding it was too early to say if France was headed towards new full or partial lockdowns.

An extended nighttime curfew will come into force across most of France at the stroke of midnight, affecting roughly two in three citizens. The 9 p.m. to 6 a.m. curfew, which had already been imposed in Paris and its suburbs, will now be extended to 38 other regions, and Polynesia.

Some 46 million people will have to stay home overnight unless they have a good reason for going outdoors.

For the second day in a row, Italy has reported a record number of new cases, registering 19,143 infections over the most-recent 24-hour period.

The Mediterranean country appeared to have the virus under control while the rest of Europe grappled with a second wave. However, a recent surge in infections has prompted new lockdowns.

Switzerland also hit a new record of COVID-19 infections, as the country of 8.6 million people saw 6,634 new cases over the previous 24 hours.

The federal government in Bern is expected to impose tougher nationwide measures next week, even as the country aims to keep businesses open, children in classrooms and hospitals operating.

Germany has now added the whole of Switzerland to its high-risk list of coronavirus hotspots.

The Netherlands, one of the European nations worst hit by the second wave, has begun transferring COVID-19 patients to Germany, amid a rapid rise in domestic hospitalizations.

The Flevo hospital in the central Dutch town of Almere said it would transfer two of its intensive care patients by helicopter to the western German city of Münster, around 65 km (40 miles) east of the Dutch-German border.

It was not the first time that Dutch coronavirus patients were sent to Germany, where the intensive care capacity is significantly larger. During the first wave in March and April, dozens of seriously ill people were transferred.

Spanish Prime Minister Pedro Sanchez says the "real number" of coronavirus infections in his country is now more than 3 million. Spain officially has just over 1 million cases, but Sanchez said extrapolations from a nationwide antibody study showed the actual figure was far higher.

Meanwhile, Madrid's regional government is introducing a ban on households gathering indoors between the hours of midnight and 6 a.m. The new measures, to come into effect on Saturday, will also limit capacity inside restaurants, bars, gyms and cinemas to 50%.

Poland will close restaurants for two weeks and cap public gatherings at five people from Saturday as part of new regulations to slow the spread of the coronavirus. The eastern European country recorded more than 13,600 infections on Friday — its highest daily caseload since the pandemic began.

Germany has reported more than 11,200 cases for a second day in a row. The number of infections has been steadily increasing, with the daily tally crossing the 10,000 mark on Thursday for the first time since the pandemic began. Data from the Robert Koch Institute for infectious diseases on Friday showed there were 49 new deaths, bringing the country's toll to 9,954.

A project by the UK government has backed up previous Dutch and French research that revealed that traces of COVID-19 can be found in sewage. The findings can indicate if a local community or institution is experiencing a spike in cases, giving health officials early signs of a local outbreak.

The UK project, which was launched in June, proved that fragments of genetic material from the virus can be detected in wastewater.

The study has now been extended to 90 wastewater sites in England, and the government aims to expand it further.

Meanwhile, the British government will increase subsidies for bars, pubs and restaurants, amid pressure to ease the economic impact of the virus on small businesses and workers.

"We have an economic plan that will protect the jobs and livelihoods of the British people wherever they live and whatever their situation," said the finance minister, Chancellor of the Exchequer Rishi Sunak.

India has reported fewer than 60,000 new cases for a fifth consecutive day, a significant decline from the daily record of 97,000 infections it posted a month ago.

India has the second-highest caseload in the world behind the United States, but the number of new daily cases has shown a downward trend in October. The Health Ministry says 54,366 news cases were registered on Friday, taking the overall total past 7.7 million.

Experts have warned that the festival season, currently underway in the world's second-most populous country, could lead to a fresh spike.

Japan's expert panel to combat the pandemic has proposed extending the New Year's holidays by about a week until January 11. Experts believe that extending the holiday would help in reducing the rush among travelers returning to their home towns, said Japan's Kyodo news agency.

The Australian state of Victoria, which was a COVID-19 hotspot, reported on Friday that active cases had fallen to a four-month low. Only one new infection was recorded in the past 24 hours.

"This is a good number. This is a very clear sign that the strategy is working," state premier Daniel Andrews said. The state is expected to announce an easing of restrictions and social distancing measures on Sunday.

During the final US presidential debate, President Donald Trump said he took full responsibility for the US response to the pandemic, insisting that he had performed well.

"We closed up the greatest economy in the world to fight this disease, which came from China," he said, adding that mortality rates in the US were "down" and that a vaccine "will be delivered in weeks." He said that the US, with the most recorded cases and deaths in the world in gross terms, was now "rounding the turn."

Read more: Trump and Biden square off in final debate — How it went

Most countries are reporting more and more new COVID-19 cases every day: Data for the global picture shows that the pandemic is far from over. DW's weekly statistics update.