France registered more than 40,000 cases over a 24-hour period. Italy has also reported a one-day record number of infections, while a late night curfew is set to take effect in Rome. Follow the latest from DW. 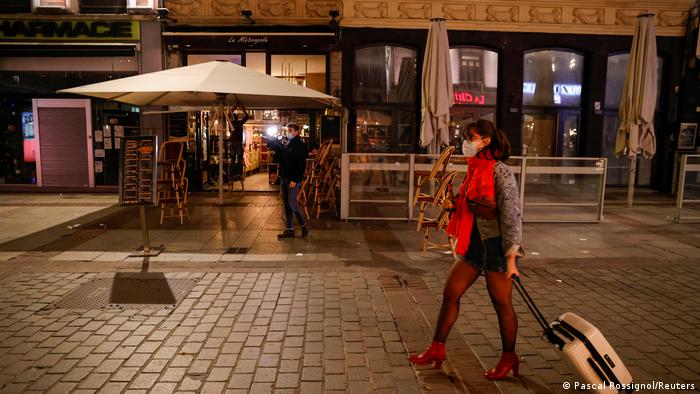 France's upward trend in terms of coronavirus infections has continued, with the country reporting more than 40,000 cases in a day for the first time.

"The situation is grave," French Prime Minster Jean Castex said as health authorities reported 41,622 new cases over 24 hours, a figure that was published shortly after the government announced a broad extension of the curfew put in place a week ago in Paris and other major cities.

As of Friday at midnight, two-thirds of the French population will be subjected to the curfew as authorities try to stem the tidal wave of infections.

Here are the latest updates from Europe and the rest of the world.

Italy's Lazio region, which includes the capital city, Rome, will impose an overnight five-hour curfew starting at the stroke of midnight on Friday. The measure will continue for 30 days.

The governor, Nicola Zingaretti, who had also earlier contracted the virus, signed the ordinance on Wednesday. Italy's Premier Giuseppe Conti asked Italians to limit their movements and refrain from any "superfluous actions."

Lazio residents will not be able to leave their homes from midnight to five except to go to or return from work or other emergency reasons. The move comes as the country registered an all-time high of 16,079 new cases. 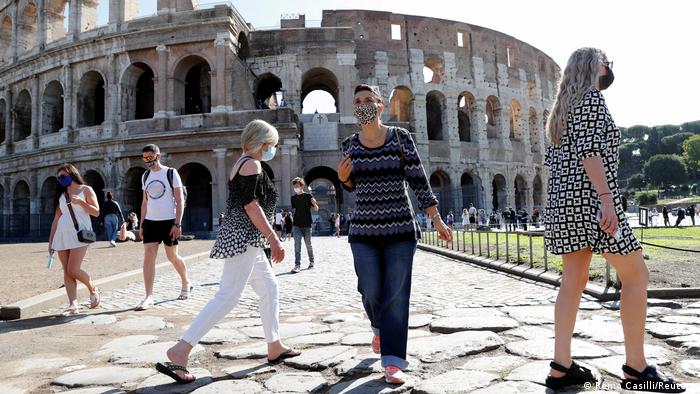 Slovakia will impose a partial lockdown, beginning on October 24 and lasting until November 1, Prime Mister Igor Matovic has announced. People will still be allowed to leave for work, to carry out essential chores and to go on nature trips near home.

In Germany, The Robert Koch Institute recorded more than 11,200 new COVID-19 cases  over the past 24 hours. It's the first time since the start of the pandemic that the country's daily caseload has reached a five-figure tally.

Spain became the first western European country to exceed 1 million known infections in total. The Health Ministry reported 16,793 cases over the past 24 hours, taking the total to 1,005,295 since its first case was diagnosed on January 31. France followed soon after; the Johns Hopkins University tally put the country's total just clear of 1 million early on Thursday. Seven countries have cleared that milestone to date, but four of them — the US, Russia, Brazil and India — have far larger populations than Spain, France and Argentina.

In the UK, officials tightened restrictions on three more areas of England, putting them in the "high" category of the UK's new three-tier system. The move means people in the affected areas will not be allowed to meet up with others outside their households. Several cities in northern England are in the top "very high" category, which requires the closure of bars, pubs, casinos and other areas for at least four weeks.

Poland broke another record in new cases for the country, logging over 12,100 new infections on Thursday and nearly 170 new deaths. Prime Minister Mateusz Morawiecki has said he wants "red zone" measures to be extended to the entire country amid a record spike in infections. The country has two stages of alertness prior to a full lockdown: "red" and "yellow" zones. Red and yellow zones alike require that masks be worn in public indoor spaces and social distancing be observed. The main differences between the two tiers include additional restrictions on restaurant opening hours and on large private gatherings like weddings, the closure of swimming pools and gyms, and limits on the numbers of people in shops or on public transport.

Sweden has told its senior citizens that they should observe only the recommendations for the rest of the population and no longer self-isolate. The general advice includes avoiding large gatherings, staying home if symptoms occur and maintaining physical distance to others.

The government said its recommendation was prompted by growing reports of mental health problems among the elderly caused by loneliness and restrictions on movement.

Belgium's foreign minister and ex-prime minister, Sophie Wilmes, has been hospitalized in intensive care after becoming infected by the coronavirus last week.  A spokesperson described her condition as "stable." Belgium has been badly hit by the pandemic, with more than 10,000 people from a population of 11.5 million dying from coronavirus-related causes.

The US Food and Drug Administration (FDA) has fully approved the antivirial drug remdesivir as a treatment for COVID-19. It is the first drug for treating COVID-19 to be fully approved by the US regulatory body. It had been authorized for use on an emergency basis since May.

The drug has been approved, or temporarily authorized, in around 50 countries, although its efficacy in reducing the COVID-19 mortality rate is unproven. It was first developed to treat Ebola, and works by inhibiting a virus's copying mechanism.

A participant in the COVID-19 vaccine trial has died in Brazil, health authorities said. Trials will be continuing for the vaccine, which is being developed by AstraZeneca and Oxford University. Oxford confirmed in a statement that "there have been no concerns about safety of the clinical trial."

A source told Reuters that the trial would have been suspended as a precaution until precise cause of death was determined if the volunteer who died had received the COVID-19 vaccine. This suggests that the person was part of the control group that was given a meningitis jab.

Meanwhile, President Jair Bolsonaro on Wednesday appeared to reject his government's earlier announcement that it would purchase millions of doses of an experimental vaccine being developed in China. Bolsonaro's health minister had announced the deal alongside the mayor of Sao Paolo, a political rival of the president.

"The Brazilian people will not be anyone's guinea pig," Bolsonaro said on social media. He noted that the vaccine was yet to complete testing, though that is the case for all possible vaccines in development at present. "My decision is not to purchase such a vaccine."

Monday's original announcement had made it clear that the purchase was contingent on the vaccine clearing clinical trials successfully.

Read more: COVID-19 vaccine update: Who are the frontrunners?

COVID-19 hospitalizations in the USA have risen by 36%, as states in the Midwest report rising numbers. In October, 16 states have reported their highest numbers of daily hospitalizations during the pandemic.

All of Puerto Rico's emergency 911 call centers were shut down on Wednesday, after several employees tested positive for the virus.

Two new numbers were provided for the emergency management agency as alternatives. But people calling the first number reported that they heard a recorded message asking them to call 911 for emergencies. Public Safety Secretary Pedro Janer said the reopening of the call centers would be announced soon, after they were thoroughly cleaned.

India has seen a rise of 55,839 infections, taking the country's tally to 7.71 million, according to Health Ministry figures. The number is down from a peak in September. The death toll from the virus in the past 24 hours rose by 702, with the toll now standing at 116,616.

India now has the second-highest number of coronavirus infections in the world after the US, which has registered 8.3 million coronavirus cases.