German Health Minister Jens Spahn has tested positive for the coronavirus and has "cold-like symptoms," his ministry said. He has gone into immediate isolation, though other cabinet members would not be doing likewise. 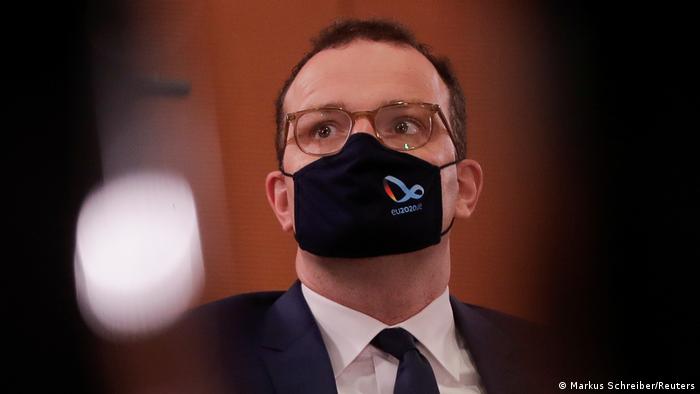 The ministry said that 40-year-old Spahn had immediately gone into isolation and that so far he has developed "cold-like symptoms."

The health ministry confirmed all those in contact with Spahn had been informed, though no members of Chancellor Angela Merkel's Cabinet will be self-isolating — despite having met with the health minister during a meeting earlier on Wednesday.

"The Federal Cabinet meets in compliance with hygiene and distance rules, which aim to ensure that even if a person who later tests positive were to participate, quarantining of other or even all participants would not be necessary," a government spokesman said.

When informed of Spahn's diagnosis, Merkel wished him a speedy recovery, the spokesman confirmed. German Foreign Minster Heiko Maas expressed similar sentiments as he tweeted: "We keep out fingers crossed for you."

Spahn later tweeted his gratitude for the well-wishes he's received, writing: "I hope everyone I've been in contact with stays healthy. Let's all continue to look out for one another!"

Spahn is one of Germany's most high-profile political figures to contract the virus, which has infected nearly 400,000 people across the country since the start of the pandemic.

Germany is currently facing a resurgence of cases, registering record numbers of new infections over the past week. The spike in cases has prompted officials to introduce  tougher measures on public life to stem the spread of the virus.

Germany is now recording more than 50 infections per 100,000 people over a one-week period, meaning that for the first time, the country has breached its own critical threshold for tackling the pandemic.

The so-called seven-day incidence rate, which is used by authorities to decide when to tighten restrictions, is currently at 51.1 for the whole country, according to data released by the Robert Koch Institute (RKI), Germany's national disease control agency.

RKI expresses optimistic future if we stick to the rules

Despite the recent spike in cases, the head of the RKI told DW he's confident the country can curb the spread of the virus — as long as people stick to the rules.

Dr. Lothar Wieler said he understands that people, particularly the younger generation, are "fatigued" by the pandemic and social distancing measures, but he urged the public to cut back on private events, particularly in closed areas.

"We don't see so many outbreaks at workplaces or in public transportation, but it's mostly coming together in privacy, in parties and also in services and weddings," Wieler told DW, before adding: "We shouldn't have too many of these events."

Looking to the winter, the RKI chief said that Germany's hospitals are "well prepared" to handle further surges in COVID-19 patients because "we have a high number of intensive care units" and "we have learned from the first peak that we had in April and March," he reasoned.

"If we can calm down the numbers, we can manage it, and that's the most important [thing] — but we can only bring down the numbers if we stick to these rules," Wieler emphasized.

Indoor professional sports under the shadow of the coronavirus: A rollercoaster of emotions

Though Germany's handball and basketball leagues are back on the court, the country's top ice hockey league's season is on ice — as opposed to on the ice. The mood is one of frustration, but also of determination.

"The situation is serious and I recommend that everyone takes it as such," German Health Minister Jens Spahn has warned, as he called for rapid action to contain a fourth wave of the coronavirus.