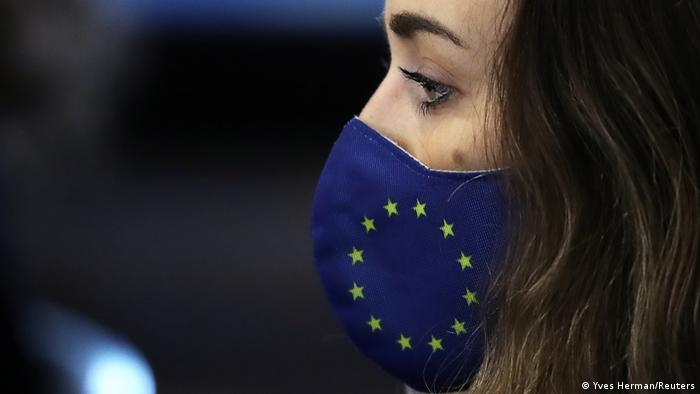 On Saturday, Chancellor Angela Merkel urged Germans to "avoid all unnecessary travel, and all nonessential gatherings." She also implored them to stay home as much as possible. Just one day earlier, the Robert Koch Institute, Germany's disease-prevention authority, had recorded a staggering 7,830 new coronavirus infections. The RKI's numbers confirm that Germany, like the rest of the European Union, finds itself in a second wave of coronavirus infections.

Through Monday, Germany recorded a seven-day incidence of 45.4 new infections per 100,000 inhabitants in the seven-day period through October 15, according to the RKI — a relatively low rate compared with the Netherlands, which recorded 307, and Belgium, which reported over 487.5.

Germany's Foreign, Health and Interior ministries collectively decide on in which countries and regions the risk of coronavirus is higher. Currently, German authorities deem any country or region with 50 or more infections per 100,000 inhabitants within one week dangerous. Presently, Germany classifies 15 of the EU's 27 member states as having either regional or national infections risk. On Saturday, the Netherlands, Malta, Slovakia and the French mainland were added to the long list. German holidaymakers returning from one of these areas must now inform their local public health department and quarantine for two weeks — unless they test negative for the virus.

Germany's 16 states have the power to exempt certain individuals from going into two-week quarantine. North Rhine-Westphalia, for instance, does not apply the quarantine rule to "persons who cross the border for work, or transport goods by road, rail, sea or air." This means, simply put, that lorry drivers, train drivers, pilots and the like must not self-isolate when returning to NRW from high-risk areas. The same applies to diplomats, members of the European Parliament, commuters, trainees and students. Individuals returning from such areas may also be exempt from going into quarantine if they stayed for 72 hours or less and visited either their romantic partner or a close relative. Moreover, they are exempt if they spent time abroad caring for children or ill people, attended a wedding or funeral, or received urgent medical treatment.

On Monday, the Netherlands recorded 8,015 new coronavirus infections — a worrying figure given that the country has a population of just 17 million people. Indeed, the Amsterdam-based virologist Hans Zaaijer recently told the daily De Telegraaf that the Netherlands is edging toward a catastrophe. The entire country has the capacity to treat just 1,150 patients in intensive care units at once. NRW, which borders the Netherlands, has a similar population size, yet sufficient ICU capacity to treat about 6,000 patients.

The government of the Netherlands has imposed a partial shutdown to gain control of the outbreak. Bars, cafes and restaurants have been ordered to close. Alcohol sales after 8 p.m. are now prohibited, as is welcoming more than three guests to one's home. Authorities have called on people to avoid nonessential bus and train journeys.

On Saturday, German authorities classified the Netherlands as a high-risk country. The Netherlands, meanwhile, still allows foreigners from countries with a similar or lower coronavirus infection rate, such as Germany, to enter. Travelers arriving by air must fill out a form.

From Friday through Sunday, Belgium recorded more than 30,000 new infections. These figures are alarming in light of Belgium's population of just 11 million people.

All restaurants shut for four weeks starting Monday. No alcohol may be sold after 8 p.m., and Belgians face a nationwide curfew between midnight and 5 a.m. Germany designated Belgium a high-risk country in late September. Belgium, in turn, has labeled the German cities of Berlin and Bremen high-risk zones. Anyone returning from such cities must report their travel and go into five-day quarantine. After that, they may get tested for the virus. If the result is negative, they may stop self-isolating.

France, too, has reported a surge of infections. Within 24 hours, more than 32,000 new cases were reported. Authorities have imposed a curfew in Paris and other major cities between 9 p.m. and 6 a.m. All restaurants and bars must remain shut during this time. French cities have been transformed into nightly ghost towns. This measure covers about 20 million of the 67 million people who live in France. Exemptions are only granted in case of medical emergencies, and for individuals traveling to or from work. About 12,000 police officers have been tasked with enforcing the curfew. Private gatherings, such as weddings, may not be held at venues or public places. Germany classifies the entire French mainland as a high-risk area, but Germans are permitted to enter France without testing or reporting their travels.

On Saturday, Poland recorded just under 10,000 new coronavirus infections in a nation of 38 million people. That same day, Prime Minister Mateusz Morawiecki — whose bodyguard tested positive for COVID-19 earlier in October — announced on Facebook that he would stop self-isolating. Poland has introduced stringent new safety measures. Authorities have classified 150 regions, including the capital, Warsaw, as high-risk zones. In such areas, wedding receptions are now prohibited and public swimming pools and gyms have been forced to shut. Restaurants cannot serve guests between 9 p.m. and 6 a.m., though takeaway is allowed. School children will have to study at home.

On Saturday, German authorities declared five Polish regions, including the cities of Gdansk and Krakow, high-risk areas. Individuals traveling from Germany to Poland require no special paperwork or tests to enter.

Read more: Ireland shuts down again to fight the pandemic

The Czech Republic is one of the countries hardest hit by the latest coronavirus outbreak. The country of 10.6 million people reported more than 11,000 new infections on Friday, and has a seven-day incidence of 514.9 new cases per 100,000 inhabitants. Bars and restaurants were been ordered shut on October 14. Public consumption of alcohol is prohibited. Students must receive courses remotely. In a televised address on Friday evening, President Milos Zeman urged his compatriots to wear masks: "Without a vaccine, we only have one weapon — and this weapon is a little piece of cloth."

German authorities designated the country a high-risk zone on September 25. The Czech Republic requires anyone entering the country from Germany to take a coronavirus test within five days and quarantine until then.

Read more: Where can non-EU travelers enter the bloc during the pandemic?

For the first time in months, Austria has shut down an entire town. Nobody is allowed to enter or leave Kuchl, a community of 7,000 residents, until November 1.

Germany has designated three Austrian states, 10 Swiss cantons, one Danish region and all of Luxembourg high-risk zones. Travelers from Germany to Luxembourg, Denmark and Austria, however, can enter without having to quarantine or fill out paperwork. Switzerland has classified Berlin and Hamburg as high-risk zones. Anyone from these cities must self-isolate for 10 days, or present a negative coronavirus test upon entering Switzerland.