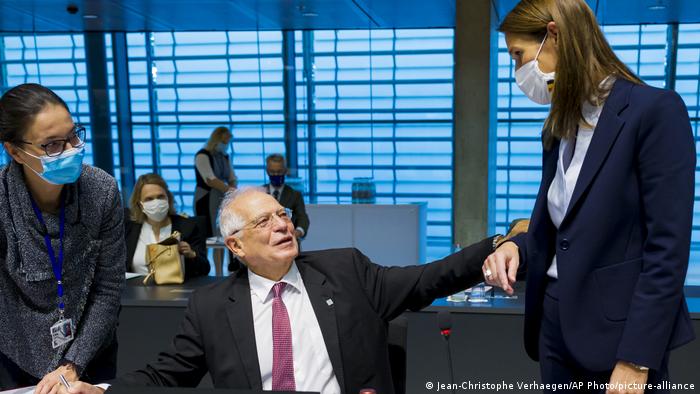 Schallenberg and Wilmes both attended a meeting of EU foreign ministers in Luxembourg last Monday.

Belgium's Wilmes (pictured above, right) announced her positive test in a post on Twitter. "My COVID test result is positive. Contamination probably occurred within my family circle given the precautions taken outside my home," she wrote.

However, a spokesman for Austria's Schallenberg said he may have been infected at the EU summit, in comments to Austrian news agency APA. The entire Cabinet of Austria has since been tested as a precaution.

EU foreign affairs chief, Josep Borrell, later announced he would go into quarantine as a precaution, wishing Wilmes and Schallenberg a swift recovery.

A spokesman for German Foreign Minister Heiko Maas said he had "no close contact" with his Austrian counterpart Schallenberg and that he had recently tested negative.

"A strict hygiene and security concept is applied during Foreign Office business trips. Within this framework, Foreign Minister Maas and all staff members who accompanied him in Luxembourg have been tested routinely and with negative results, most recently yesterday, Friday," he said.

European Council President Charles Michel on Friday defended in-person EU meetings despite a surge in virus cases across the continent.

The European Commission president left a summit of EU leaders as a precautionary measure after an aide tested positive for COVID-19. Meanwhile, the EU has produced a map aimed at guiding decisions on travel restrictions.

Ministers from the 27 member states have adopted a "traffic light" system as a guide on whether to require testing or quarantine for non-essential EU travelers, eventually restoring free movement when conditions allow.

Attendees of the foreign ministers meeting