The European Commission president left a summit of EU leaders as a precautionary measure after an aide tested positive for COVID-19. Meanwhile, the EU has produced a map aimed at guiding decisions on travel restrictions. 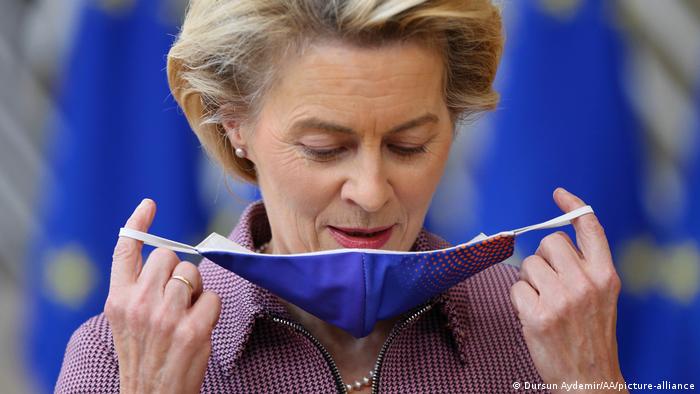 European Commission President Ursula von der Leyen made a hasty exit from a Brussels summit of EU leaders on Thursday after one of her close staffers tested positive for the coronavirus.

The EU chief took the action as a precautionary measure, even though she tested negative for the virus.

"I have just been informed that a member of my front office has tested positive to COVID-19 this morning," she tweeted. "I myself have tested negative. However as a precaution I am immediately leaving the European Council to go into self-isolation."

The meeting of the 27 leaders across the bloc, plus numerous top EU officials, was in full flow when the Commission president left.

Brexit and climate change were two of the key topics for discussion at the summit in the Belgian capital, as well as the EU's next steps on tackling the virus sweeping the continent.

Meanwhile, in its latest update on Thursday, the European Center for Disease Prevention and Control (ECDC) said that more than 4.4 million cases of COVID-19 had been reported across the bloc's 27 member states, plus Britain, Iceland, Liechtenstein and Norway, while more than 198,000 people have died from the virus.

As a result, several nations are tightening measures and the EU themselves have produced a new map issued by the bloc's disease control agency aimed at guiding decisions on travel restrictions.

More than half of the countries on the map, 17 out of 31, were labelled red, which was issued after EU member states decided on Tuesday to coordinate their approach to travel restrictions.

For countries that are red and orange, EU states are free to decide what restrictive travel measures, if any, they wish to implement.

Five countries — Austria, Germany, Sweden, Denmark and Iceland — did not receive a rating, with the agency citing a lack of data.

Kamala Harris has cancelled in-person events after her communications director and a travelling staffer tested positive. Biden is said to have had no exposure, despite hours of joint campaigning a week ago.

Berlin's coronavirus ad campaign showing an elderly lady giving anti-maskers the middle finger has sparked quite a furor. But then the German capital is used to a fair bit of controversy, writes James Jackson.