As nine French cities prepare for nightly curfews and Germany announces tougher measures, citizens across Europe have been told the restrictions are "absolutely necessary" by the WHO. Follow DW for the latest. 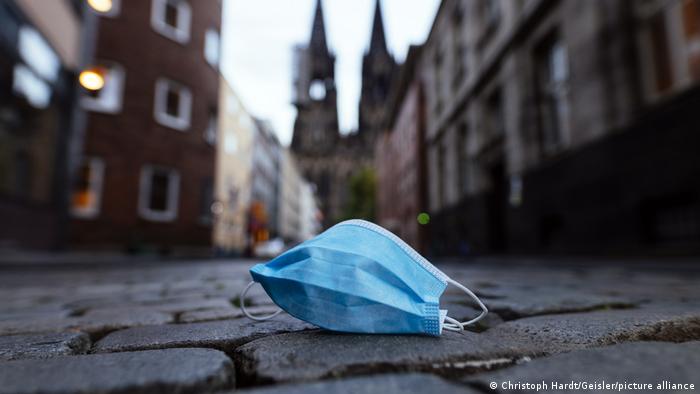 Fernando Simon, the government's top virus expert, said that although the situation was far from ideal, "we have the sensation that we are in a process of stabilization.''

Spain has a total of 921,374 confirmed cases — more than any other European country.

20:49 The bars in the UK's House of Commons will be banned from selling alcohol as of Saturday to reflect the tightening restrictions being implemented across the country.

Speaker Lindsay Hoyle said it would no longer be possible to buy an alcoholic beverage on the estate by the River Thames after the government shut pubs around the city of Liverpool as part of a three-tiered approach as the country grapples with increasing numbers of COVID-19 infections.

"As Members of Parliament represent different constituencies in different tiers, with the very highest level ordering the closure of pubs, I have decided to stop the sale of alcohol across the House of Commons-end of the estate from this Saturday," Hoyle said in a statement.

20:03 The number of people who have tested positive for coronavirus in France over the past 24 hours has exceeded 30,000 for the first time since the country started collecting data on COVID-19.

The French public health agency said that a total of 30,621 infections had been reported in the past 24 hours.

The death toll over the same 24-hour period was 88.

19:00 Some regions in Italy have decided to add restrictions to those that have already been imposed by the central government.

The southern Campania region, of which Naples is the capital, has decided to shut schools until the end of October after a surge in infections.

Some 1,127 people tested positive in Campania on Thursday, the second hardest-hit region on the peninsula after Lombardy in the north.

Italian authorities have been trying to increase testing capacity after complaints of long lines at centers, and Thursday saw a new record for tests carried out over a 24 hour period, at 162,932.

17:04 The German Foreign Ministry has declared all of France, the Netherlands, Malta and Slovakia to be high-infection areas and has warned against nonessential travel to those countries. Official travel warnings are set to come into force on Saturday.

The announcement came after the French border area with Germany was declared a coronavirus risk area for the first time since mid-June by the Robert Koch Institute (RKI), the federal government agency for infectious diseases.

The news comes as many Germans have been panic-buying and doing border runs for commodities between the French city of Strasbourg and the German town of Kehl, located on the River Rhine, just 6 kilometers (3.7 miles) from Strasbourg.

Cars jammed the Europabrücke, the bridge that crosses the Rhine between the two locations, to do a spot of last-minute shopping. 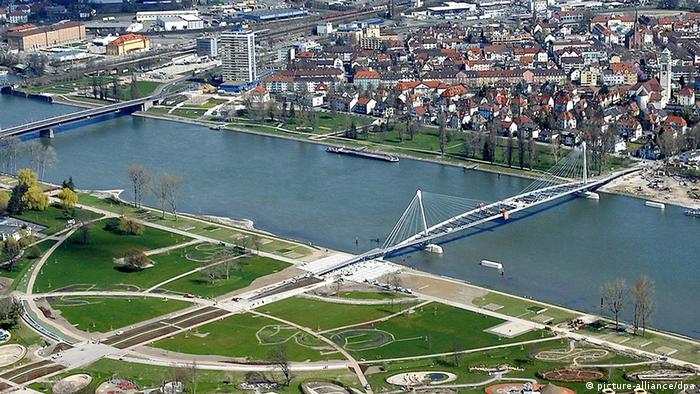 The Europabrücke: The bridge that crosses the Rhine between Strasbourg and Kehl

In the border state of Baden-Württemberg, where Kehl is located, in southern Germany, stores were seeing essential products selling out as Germans began to hoard toilet paper, diapers and other hygiene products.

French citizens made similar trips across the border for cigarettes, which are traditionally cheaper in Germany than their homeland.

16:53 US Senate Majority Leader Mitch McConnell has rejected the notion of a COVID-19 relief package worth $1.8 trillion (€1.54 trillion) on Thursday, calling his plan for a $500-billion bill a more sufficient response to the pandemic.

"My members think what we laid out — a half a trillion dollars, highly targeted — is the best way to go. So that's what I'm going to put on the floor," McConnell said. "It's what Senate Republicans ... feel like is an appropriate response."

16:35 Poland will implement tighter measures on social gatherings, reintroduce remote learning in numerous secondary schools, and order restaurants to close by 9:00 p.m., as part of restrictions aimed at quelling the recent spike in cases in the country, Prime Minister Mateusz Morawiecki has announced.

Fans will be banned from stadiums during sports events, while gyms and swimming pools will be closed for the time being, the Health Ministry said.

"We need to pump the brakes," Health Minister Adam Niedzielski said during an afternoon press conference with the remote participation of quarantined Morawiecki, who went into self-isolation earlier this week after coming into contact with someone who tested positive for the coronavirus.

More than 150 counties across the country, home to 70% of Poland's population, will be declared "red zones," where even stricter measures on social gatherings will be imposed. 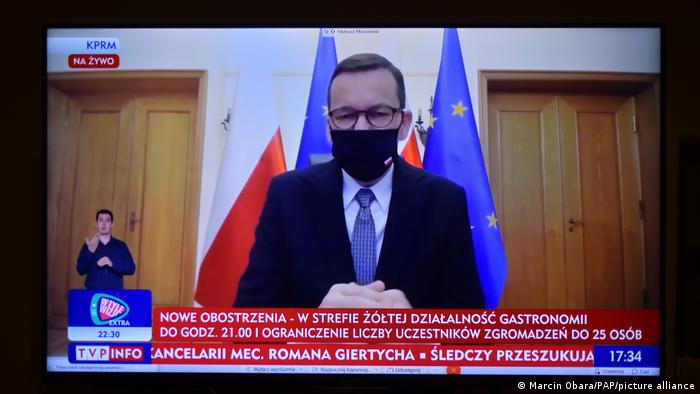 Fauci told ABC's "Good Morning America" program that given the rise in infections, "we've really got to double down on fundamental public health measures that we talk about every day because they can make a difference."

Fauci cautioned that the November national holiday, when millions of people across the US tend to travel to meet up with families and friends, should be a more muted affair this year: "We really have to be careful this time that each individual family evaluates the risk-benefit."

Fauci said it is particularly important because people traveling over the holiday often pass through crowded transportation hubs such as airports.

"If you have vulnerable people, the elderly or people that have underlying conditions, you better consider whether you want to do that now or maybe just forestall it and wait," Dr. Fauci said.

15:17 Italy has registered a record daily high figure of 8,804 infections, the country's Health Ministry announced. It exceeds any figure Italy has previously posted, including when it was inundated with cases as it became Europe's hardest hit country in the early stages of the crisis. The number is also a significant jump on Wednesday's figure of 7,332.

15:01 The Polish government is on the verge of announcing tougher coronavirus measures after a record high of 8,100 new cases. Citizens are bracing themselves for a tightening of restrictions on daily life as a result.

Doctors in Poland have urged the government to provide more support for the country's overwhelmed healthcare system.

14:55 It has been a troubled week for Europe as the Netherlands closed its bars and restaurants, and the Czech Republic and Northern Ireland shut down schools.

The Czech Health Ministry confirmed more than 9,500 new infections on Wednesday, over 900 more than the previous daily high. The government has reacted by announcing that the military will urgently set up a COVID-19 hospital at Prague's exhibition center.

"We have to build extra capacity as soon as possible,'' Prime Minister Andrej Babis said. "We have no time. The prognosis is not good."

14:44 Kamala Harris, US presidential candidate Joe Biden's running mate, has temporarily put a stop to all travel arrangements after her communications director tested positive for the coronavirus, the campaign team said, adding that Harris had not come into "close contact" with the staffer.

14:35 The World Health Organization has said the increasing number of COVID-19 cases in Europe is of "great concern" and the stricter measures across the continent are "absolutely necessary" to help stem the tide.

"Daily numbers of cases are up, hospital admissions are up," said the WHO's regional director for Europe, Hans Kluge. But "we are not" in the situation experienced in March and April, he said.

14:23 European Commission President Ursula von der Leyen has left the meeting of EU leaders in Brussels to immediately self-isolate after one of her aides tested positive for the coronavirus.

Von der Leyen tweeted: "I have just been informed that a member of my front office has tested positive to COVID-19 this morning. I myself have tested negative. However as a precaution I am immediately leaving the European Council to go into self-isolation."

Von der Leyen has been attending a Brussels summit, along with the bloc's 27 leaders and European Council President Charles Michel, to discuss Brexit and the latest coronavirus developments across the continent.

14:00  Stricter restrictions will come into effect in London as of Saturday, the mayor of the British capital has announced.

The coronavirus is "spreading rapidly in every corner of our city," Sadiq Khan said in front of the 25 members of the London Assembly that is elected to hold the mayor accountable.

The tougher measures include restricting meetings indoors between two separate households. Outdoor gatherings are still permitted, as long as it is six people or fewer.

"Nobody wants to see more restrictions, but this is deemed to be necessary in order to protect Londoners' lives by myself, London
council leaders and by ministers," Khan said. Locals were also advised to limit their use of public transport.

"I must warn Londoners that we've got a difficult winter ahead," Khan said.

London has now moved to the second highest level in England's three-tier warning system, alongside other regions such as York and Essex, Health Minister Matt Hancock told parliament. Liverpool is at level three, the most severe on the scale, where social mixing is kept to a bare minimum, including the closure of pubs.

13:38 Nine French cities, including Paris and Marseille, are coming to terms with an impending nine-hour curfew which is due to start at 9:00 p.m. on Saturday, and will be a daily occurrence for at least four weeks.

Those that are not exempt from the curfew, such as people who work during those hours, will be hit with a €135 fine ($159) should they contravene the restriction.

13:29 Germany has reported 6,638 new coronavirus cases in its daily update, the most it has recorded since the virus first emerged in the country.

As a result of increasing numbers of infections, German citizens' behavior in the coming weeks will influence how Christmas is celebrated this year, Health Minister Jens Spahn has warned.

The news comes in the wake of Chancellor Angela Merkel announcing tougher restrictions aimed at slowing the spread of the virus.

In reporting on the coronavirus pandemic, unless otherwise specified, DW uses figures provided by the Johns Hopkins University (JHU) Coronavirus Resource Center in the United States. JHU updates figures in real-time, collating data from world health organizations, state and national governments and other public official sources, all of whom have their own systems for compiling information.