Kamala Harris has canceled in-person events after her communications director and a traveling staffer tested positive. Biden is said to have had no direct contact with anyone infected. 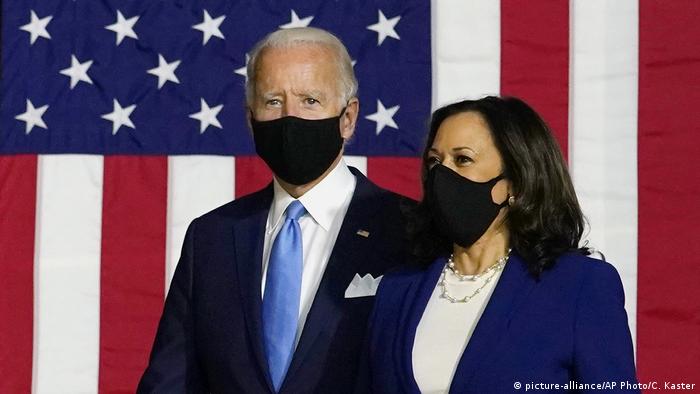 US Democratic vice presidential nominee Kamala Harris will suspend her travel plans until Monday after two people associated with the campaign tested positive for coronavirus, the campaign announced in a statement on Thursday.

Harris was supposed to attend events in North Carolina on Thursday to encourage voters to cast early ballots.

However, the campaign told reporters on Thursday morning that Harris' communications director, Liz Allen, and a traveling staff member who had accompanied Harris to Arizona, had both tested positive.

Campaign manager Jen O'Malley Dillon said Harris did not need to quarantine, but "out of an abundance of caution" would cancel her travel plans before hitting the road again on October 19.

According to the campaign, Harris was last tested on Wednesday, and was negative.

A third person tied to Democratic candidate Joe Biden's campaign has tested positive for the coronavirus.

Joe Biden, the Democratic nominee challenging President Donald Trump, reportedly had no exposure, although he and Harris spent several hours campaigning together in Arizona on October 8.

"Neither of these people have had contact with Vice President Biden, Senator Harris or any other staffers since testing positive or in the 48 hours prior to their positive test results," O'Malley Dillon said in the statement, adding that Harris was not in what the US Centers for Disease Control and Prevention define as close contact with either person.

In Arizona, Harris and Biden spent hours campaigning together, making a number of campaign stops. They also attended a string of private meetings and made a joint appearance in front of reporters at an airport.

The pair remained masked at all times, both in public and in private, and have each had multiple negative tests since then, according to aides.

O'Malley Dillon said the Biden campaign has begun the process of contact tracing "to notify everyone who came into contact with the individuals during the potential infection window."

Biden is scheduled to attend an ABC News town hall airing live at 8:00 p.m. EST on Thursday (0000 GMT Friday). The town hall comes after a second televised debate between Biden and Trump was cancelled due to the president and numerous White House staffers contracting COVID-19.

US election: Joe Biden and Kamala Harris — stronger together

The Democratic National Convention begins on Monday and will officially nominate Joe Biden as presidential candidate. Running mate Kamala Harris couldn't prevail on her own, but she can give the campaign a vital boost.

Joe Biden has named California Senator Kamala Harris as his presidential running mate. She is the first Black and Asian woman to ever run on a major presidential ticket in the US.

The governor of Florida also sent a group of 50 Latin American migrants to the wealthy island of Martha's Vineyard in Massachusetts. Some of the migrants said they had been tricked.

Facing generally low approval ahead of the midterms, Biden is hoping to get young voters on his side. The plan would cancel $10,000 in student debt for millions of Americans.