Joe Biden has named California Senator Kamala Harris as his presidential running mate. She is the first Black and Asian woman to ever run on a major presidential ticket in the US. 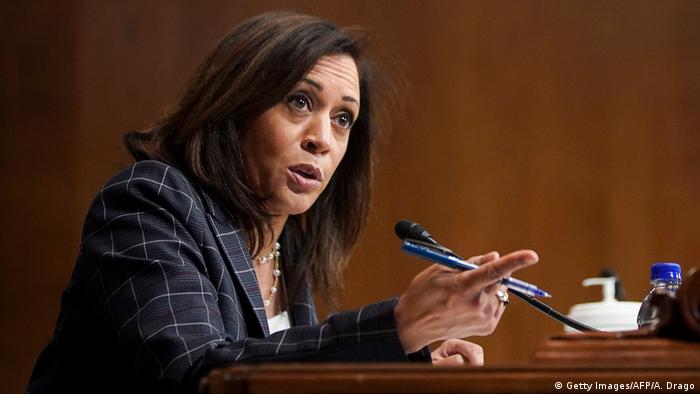 Joe Biden named California Senator Kamala Harris as his running mate on Tuesday, making history as both the first Black woman and the first Asian-American on a major presidential ticket in US history.

"I have the great honor to announce that I've picked Kamala Harris — a fearless fighter for the little guy, and one of the country’s finest public servants — as my running mate."

Harris, 55, was close with Biden's late son, Beau, who served as Delaware attorney general while she held the same post in California.

Biden's social media post continued: "Back when Kamala was Attorney General, she worked closely with Beau. I watched as they took on the big banks, lifted up working people, and protected women and kids from abuse. I was proud then, and I'm proud now to have her as my partner in this campaign."

Following the announcement, Harris tweeted she is "honored" to join Biden and she will "do what it takes to make him our Commander-in-Chief."

Earlier on Tuesday Harris wrote on Twitter: "Black women and women of color have long been underrepresented in elected office and in November we have an opportunity to change that. Let's get to work."

Harris ran her own campaign for president and had several heated exchanges with Biden during the primary debates.

She had attacked Biden for working with segregationists during his Senate years and for opposing school busing during the 1970s, a practice used to reduce segregation in schools.

Harris abandoned the campaign in December and has since supported Biden.

US President Donald Trump said that he was "surprised" that Biden chose Harris as his running mate because she had been "disrespectful" to the former vice president during the debates.

Trump said Harris had been "very, very nasty" to Biden during the primaries.

"One of the reasons that it surprised me. She was probably nastier than even Pocahontas to Joe Biden. She was very disrespectful to Joe Biden and it's hard to pick somebody that that's disrespectful," he told the media later on Tuesday.

Former-President Barack Obama applauded Biden's decision, saying it was a  "good" day for the country and Harris is "more than prepared for the job."

"She's spent her career defending our Constitution and fighting for folks who need a fair shake. This is a good day for our country. Now let's go win this thing," Obama said in a tweet

Hillary Clinton, who ran against Trump in the 2016 presidential election, said she was "thrilled" about the decision to choose Harris.

"She's already proven herself to be an incredible public servant and leader. And I know she'll be a strong partner to Biden," Clinton tweeted. "Please join me in having her back and getting her elected."

Biden's team said that the two Democrats will deliver remarks on Wednesday in Wilmington, Delaware as they kick off their joint campaign.

The party is set to convene its Democratic National Convention next week when Biden and Harris will give acceptance speeches.

The convention will be held online due to the coronavirus pandemic.

Democratic lawmakers have announced a sweeping package of legislation aimed at ending police brutality and racial injustice. Police must be "accountable to the public," said the head of the Congressional Black Caucus.

John Lewis, the long-time member of the US House of Representatives and decades-long civil rights activist, has died. The 80-year-old had announced in December that he had advanced pancreatic cancer.