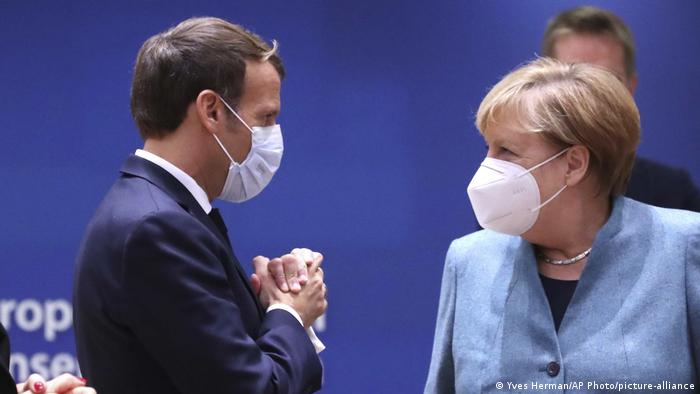 EU leaders met in Brussels on Thursday at the start of a two-day summit to seek a way out of the Brexit impasse as the bloc remained divided over ambitious targets to slash greenhouse gas emissions.

In a joint-statement released mid-way through the summit, EU leaders called on the UK to "make the necessary moves to make an agreement possible" and to budge on their red lines to make a post-Brexit trade deal possible.

British Prime Minister Boris Johnson had set a deadline of Thursday to decide whether to press ahead with the negotiations or opt for a "no deal" Brexit.

Downing Street will now make that call at the end of the EU summit on Friday.

EU chief Brexit negotiator Michel Barnier said on Thursday that he wanted talks with the UK to continue into next month. Speaking at a press conference, the Frenchman said the EU still wanted a deal, but that it should be "a fair agreement."

"The negotiations aren't over," Barnier said. "We shall remain available until the last possible day."

He added that he had suggested to the UK to hold further talks in London and Brussels over the next fortnight, and that he expected talks to continue for two or three weeks.

But his comments came as his British counterpart, David Frost, fired off a series of tweets that criticized EU leaders for removing a commitment to "intensify" talks from a joint statement on Brexit.

The Frenchman repeatedly said during his remarks to journalists that he wants to "intensify" and "speed up" talks with the British government.

"How elegant," replied one senior EU official in response to questions from DW.

Barnier also indicated that the EU was willing to make a "reasonable effort" to find a suitable compromise on fisheries.

The emotive issue has hampered progress in the talks for months. France has led a group of eight coastal states seeking to keep the status quo, a position rejected by the British government.

Talks have hit a snag over the past few months over several key issues, including not only  access to fishing waters, but also rules on unfair competition and how to enforce any potential pact between both sides.

Meanwhile, German Chancellor Angela Merkel said that the EU should also compromise with the UK to reach a final agreement.

"We have asked Great Britain to continue to be willing to compromise towards an agreement. Of course, this also means that we have to make compromises," Merkel said after the summit.

She said that Barnier enjoyed the full support of the 27 leaders.

While leaders were resolved in their Brexit response, talks over climate change were more tense.

The EU states debated a proposal from the European Commission, the EU's executive arm, that wants to reduce greenhouse gases emissions by at least 55% by 2030 compared to 1990 levels. It forms part of the bloc's goal to be climate neutral by 2050.

A group of 11 member states, including France, the Netherlands and Sweden, issued a joint statement on Wednesday saying they backed the 55 percent goal. Poland, which depends heavily on coal, is bitterly opposed to the proposal.

The bloc leaders asked the commission to conduct "in-depth consultations" with each country to assess individual target levels.

Czech Republic's Prime Minister Andrej Babis said that each country's individual energy mix should be taken into account when agreeing on a new climate target. Babis added that they would discuss this topic more seriously in December.

World leaders agreed five years ago in Paris to keep the global warming increase to below 2 degrees Celsius (3.6 degrees Fahrenheit), and ideally no more than 1.5 degrees C (2.7 F) by the end of the century.

Scientists say countries will miss both of those goals by a wide margin unless drastic steps are taken to begin cutting greenhouse gas emissions.

Heads of state and government are also set to discuss the bloc's next seven-year budget, the coronavirus pandemic response and the EU's strategy for Africa over the next two days.