A worker at an Australian Open quarantine hotel in Melbourne has tested positive, prompting new virus restrictions. And a German minister hints the country's lockdown could end soon. Follow DW for the latest. 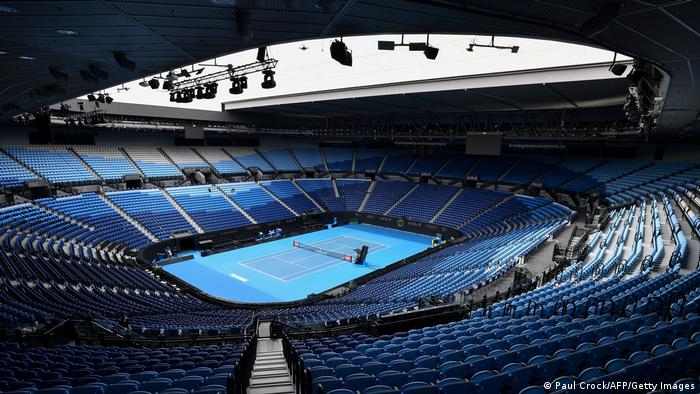 The Australian Open is scheduled to begin on Monday in Melbourne

Over 500 players and officials have been isolated and Thursday evening's draw for the Open has been moved to Friday.

Victoria state health officials insisted that the risk to players and officials is "low."

The Grand Slam, scheduled to begin on February 8, had earlier been delayed by three weeks to allow players to quarantine and play warm-up matches.

German Health Minister Jens Spahn has hinted that lockdown restrictions could be lifted before spring.

"We can't stay in this hard lockdown all winter. We would not tolerate that well as a society," Spahn was quoted as saying in an interview with the Funke media group.

It then shuttered schools and non-essential shops in mid-December, before rules on mask-wearing and working from home were tightened in January amid concerns over new virus variants.

Read on for an overview of today's most important coronavirus stories from around the world.

The total number of people who have been vaccinated against COVID-19 has surpassed the number of recorded infections.

According to data from Oxford University and the US-based Centers for Disease Control and Prevention, the total number of vaccines administered globally reached 104.9 million on Wednesday.

The total number of recorded infections, collated by Reuters, had reached 104.1 million. However, the real number of cases is likely to be much higher due to the high rate of asymptomatic cases and discrepancies in testing around the world.

The head of the UN Children's Fund announced on Thursday that the Serum Institute of India would provide the COVAX vaccine-sharing program with 1.1 billion doses made up of the vaccines produced by AstraZeneca and Novovax.

Spain's death toll passed the grim 60,000 milestone on Thursday even as infection rates began to fall. Spain has been one of the countries worst hit by the pandemic in Europe with 2.9 million cases reported since the first outbreak.

Norway's Institute of Public Health said on Thursday that it would not administer AstraZeneca vaccine doses to people aged over 65 due to a lack of sufficient data of its effects on that age group.

Ukrainian Prime Minister Denys Shmygal said that half of the country's 41 million-strong population would not be willing to be vaccinated against coronavirus.

Germany has agreed on financial aid for low earners and tax breaks for companies to cushion the economic blow from the coronavirus pandemic.

According to the terms, families will receive a one-off extra payment of €150 ($180) per child to cover extra costs.

The reduced 7% rate of VAT will continue to stay in place for the gastronomy sector until the end of 2022. It was previously set to expire in June.

A new €1-billion rescue fund named "Neustart Kultur" or "a new start for culture" has also been launched to support artists and actors who are unable to perform or showcase their work.

The German Robert Koch Institute recorded 14,211 new coronavirus cases and 786 deaths in the country on Thursday.

In the United States, new vaccination centers are set to open on February 16 to cater to two Californian communities that have been particularly hard-hit by COVID-19.

The new centers are being set up as state and federal officials attempt to deal with racial and economic disparities impeding immunization efforts in the country.

According to Californian Governor Gavin Newsom, the vaccination sites will have the capacity to administer nearly 6,000 shots per day and will be among the first of over 100 vaccination centers set up in communities of color across the US.

Brazil said on Wednesday that it was in talks to purchase 30 million doses of Russia's Sputnik V and India's Covaxin vaccines, as regulators have made it easier for the shots to get emergency-use authorizations.

So far, only the AstraZeneca-Oxford vaccine and China's CoronaVac have been allowed in Brazil, the second-worst-hit country in the world after the US, with more than 226,000 coronavirus deaths.

The appeal came only two months after Duque faced criticism for announcing in December that undocumented migrants from Venezuela would be dropped from Colombia's vaccination drive.

Saudi Arabia will close restaurants and entertainment venues for 10 days from Thursday evening, two days after the country banned arrivals from 20 countries including Germany, France and the UK.

Weddings and work conferences at hotels and other private facilities will be banned for 30 days as the country attempts to curb rising infection rates. The Gulf country has recorded 368,500 cases and 6,386 deaths so far.

Qatar made a similar move, reintroducing a whole raft of restrictions on education, leisure and business activities, including closing indoor swimming pools and theme parks and restricting restaurant capacities.

The country reported 407 new cases of infection with the virus on Thursday. Daily case numbers have been steadily rising since a one-day December low of 117.

The Palestinian Authority is set to receive 10,000 doses of the Russian Sputnik V vaccine on Thursday, days after it launched its vaccination program with a small delivery of doses from Israel, which is currently leading the world in terms of per capita administered vaccines.

Iran also received its first doses of the Russian jab, according to the state news agency IRNA.

Tehran argues US sanctions have hindered its fight against COVID-19.

Taiwan has reported its first death of a foreign patient from COVID-19, bringing the country's total death toll to the relatively low number of nine.

The patient was a British man who had contracted the new virus variant first detected in the UK. The country also announced two new infections on Thursday, bringing the total number of recorded cases to 919.

The COVAX vaccine-sharing program will deliver 1.992 million doses of the AstraZeneca vaccine, manufactured by the Indian Serum Institute, to North Korea during the first half of the year, agencies involved in the program said. The east Asian country has not reported any cases of COVID-19.