Austrians angry with the government for reimposing a full lockdown in the country have taken to the streets in protest. Elsewhere, Singapore is loosening tight restrictions. DW has the latest. 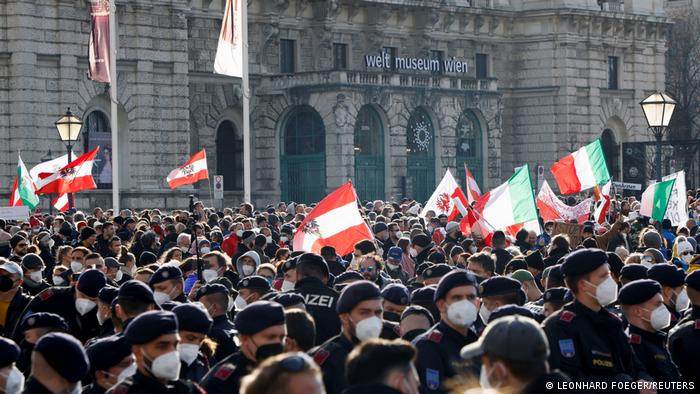 After Austria announced a fresh lockdown and vaccine mandate, protesters gathered Saturday to voice their objections

Protesters have taken to the streets in Austria on Saturday, a day after the government announced it was locking down the country. Police reported 30,000 people participated in the rally and there were ten arrests, all for violating COVID-19 restrictions or use of banned Nazi symbols.

Austria became the first European country to reimpose a full COVID lockdown on Friday. The government also made vaccines mandatory for citizens from February 2022.

The strict rules prompted anger among sections of the population, with the leader of the far-right Freedom Party of Austria (FPÖ) — who is currently diagnosed with COVID — saying the rules set the country on track for "dictatorship."

Police said Friday three young Austrians from Linz admitted they planned to ambush police officers during the planned protests, given their dissatisfaction with tighter restrictions. The two teenagers and a 20-year-old said they also intended to set officers on fire, DPA news agency reported.

Police say around 1,300 officers are going to be deployed across the country to keep things under control, like making sure people wear face coverings as required at all times and adhere to other health safety guidelines.

Austria previously imposed a lockdown for the unvaccinated earlier in the week, but a rising number of infections put pressure on the government to act quickly to curb the spread of the virus.

Several other European countries, like Germany and the Netherlands, are also reeling under a new wave of infections, triggering debate over whether vaccinations alone can do the job of slowing a resurgence of the virus.

In Rotterdam, the Netherlands' second-largest city, protests turned violent on Friday evening as people rallied against a government plan to impose strict rules.

Germany recorded 63,924 new coronavirus infections and 248 new deaths over the past 24 hours, data from the Robert Koch Institute, the country's public health authority, showed on Saturday. Germany is currently reeling under a fourth wave of infections, with Health Minister Jens Spahn saying that a new lockdown "can't be ruled out."

Germany's Health Ministry released a statement in support of booster shots calling the vaccines produced by BioNTech-Pfizer and Moderna "safe, effective and equally suitable for booster vaccinations." The statement added "There is enough vaccine for everyone."

The Czech Republic recorded 22,936 new cases Saturday, a pandemic record for that country. On Monday, hotels and restaurants will only be open to the vaccinated and those that have recovered from the coronavirus.

Slovakia also hit a pandemic record with 9,171 new infections. According to Our World in Data statistics, currently Slovakia has the worst reported situation with a seven-day incidence of 11,500 new cases per million residents.

Greece ordered around 85 private doctors into work at public hospitals, after asking doctors to voluntarily step up to duty earlier in November. Only a few had answered the call in at the time.

Greece entered a fourth wave of the virus this November, with the incidence rate — which is the number of new infections per 100,000 people over a seven-day period — going over 400 this week. It has also laid out stricter rules for the unvaccinated, which go into effect from Monday. 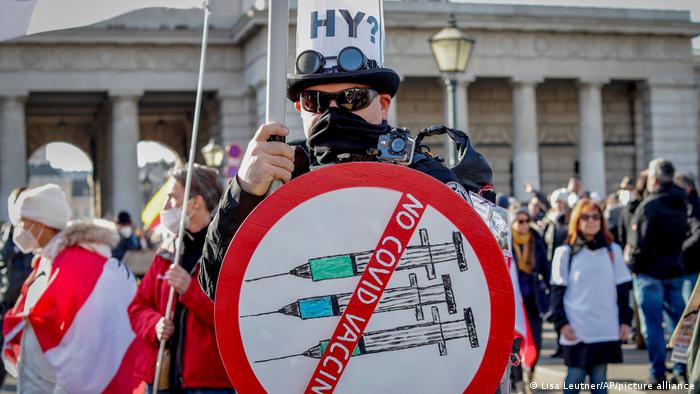 The Vienna protest was organized by the populist opposition Freedom Party

Russia reported a record high death toll from COVID-19 with 1,254 deaths, the same number of deaths officially reported as Friday.

China severely criticized the UN over comments made by the UN human rights office spokeswoman Marta Hurtado concerning the case of Zhang Zhan, a citizen journalist jailed for her coverage of the pandemic response in China.

"We call on the Chinese authorities to consider Zhang's immediate and unconditional release, at the very least, on humanitarian grounds, and to make urgent life-saving medical care available, respecting both her will and her dignity," Hurtado had said in a statement which triggered the official response.

The Chinese mission in Geneva has now expressed its displeasure at the "irresponsible" and "erroneous" comments.

Singapore's government announced Saturday that it was easing some of the COVID restrictions from Monday, with limits on social interactions being relaxed and dining out being expanded to five people from the current rule of up to two people.

Singapore's cases have stabilized over the last month, with daily cases falling below 3,000 on average. Around 85% of the city-state's 5.45 million people have been fully vaccinated.

Hong Kong has approved usage of the Chinese Sinovac Biotech COVID vaccine for all children aged over 3. It had previously approved the shots only for those aged over 18. A health official said adolescents between 12 and 17 would be given priority in receiving the vaccines.

Hong Kong has followed Beijing's lead in retaining strict travel restrictions to curb COVID outbreaks, in contrast to a global trend of opening up and living with the virus.

In Vietnam, Phu Quoc island welcomed 200 fully vaccinated foreign tourists for the first time in nearly two years as Vietnam's borders have been closed due to the pandemic. Upon arrival on the Phu Quoc, the tourists arriving from South Korea can holiday in resorts and do all the sightseeing they please without the mandatory 14-day quarantine.

In Australia, several thousand people took to the streets to protest COVID vaccination mandates on Saturday, with some people chanting "Freedom, Freedom" and others carrying "End Segregation Now" signs in downtown Melbourne.

Even though vaccination remains voluntary for people in Australia, some states have mandated vaccinations for people in specific occupations and barred the unvaccinated from social activities.

Some small crowds also gathered to support the Australian government's measures on Saturday. The country has vaccinated 85% of its population over the age of 16 so far.

Canada's health regulator approved Pfizer's COVID shot for children aged 5 to 11. As in the US, the doses given to children of this age group will be just a third of the amount given to teens and adults. New coronavirus infections have dipped in Canada, with daily new cases averaging between 2,000 and 2,500 this week.

The US moved to open COVID booster shots to all adults on Friday, though the Centers for Disease Control and Prevention (CDC) must agree to the Food and Drug Administration's decision to do so. If the CDC agrees, tens of millions more Americans could receive their booster shots by the end of the year.

Until now, there had been confusion over who really was eligible for the booster shots given factors like age and health had to be taken into account.

Correction: A previous version of this article stated that the riots in Rotterdam had "turned deadly." However, while at least two people were shot during the unrest, no deaths have been reported. This has now been corrected. DW English Online apologizes for the error.

The lockdown starts Monday and compulsory vaccines are set to begin in February. Data shows the seven-day incidence rate in the country at around 1,000 new cases per 100,000 inhabitants.