Merkel has warned that coronavirus restrictions may have to be reintroduced to curb a rise in cases. The chancellor also called for "patience" in the wake of last week's devastating floods. 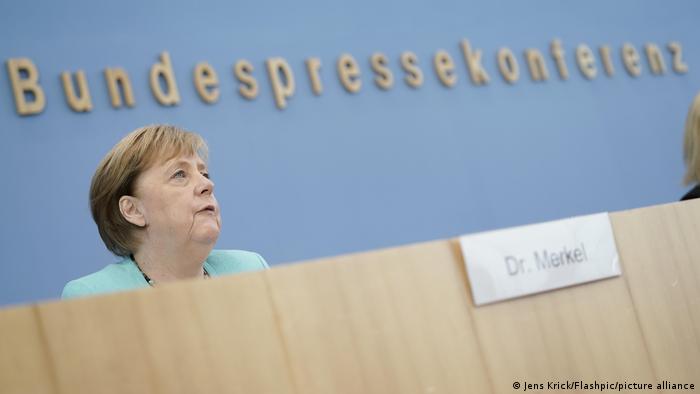 Angela Merkel wants more people to get vaccinated against COVID-19

German Chancellor Angela Merkel said on Thursday she was worried about the "exponential growth" of coronavirus infections.

Merkel commented on a number of topics in her final summer address to journalists before leaving office — from the recent spyware scandal to women in politics. But it was the pandemic and last week's flooding in western Germany that were of immediate concern for the chancellor.

She called upon citizens who have been vaccinated against the virus to "try and convince" others to do the same.

"The infection figures are rising again and with a clear and worrying dynamic," Merkel said in Berlin. "Every vaccination... is a small step towards a return to normality."

The number of COVID infections in Germany has been slowly increasing over the past two weeks, largely fueled by the Delta variant.

The Robert Koch Institute (RKI) on Thursday registered 1,890 new infections over the past 24 hours and an incidence rate of 12.2 new cases per 100,000 people over the past seven days — up from a low of 4.9 in early July.

Merkel said she expected cases to double in the next two weeks and that stricter restrictions may have to be reintroduced. "With a rising incidence rate, it could be that we need to introduce additional measures," she said.

"The more who are vaccinated, the freer we will be again."

Damage from last week's devastating floods that hit western parts of the country was immense and it would take a long time to fix, Merkel told reporters.

Merkel said not enough has been done to reduce carbon emissions, after her potential successoras chancellor, Armin Laschet, cited global warming as a key factor behind the floods.

"This is not only true for Germany but for many countries in the world," Merkel said.

Meanwhile, Merkel called for tighter international controls on the trade in spyware after reports that several governments used malware to spy on activists, journalists and political figures.

Merkel said it was "important" that "software configured in this way should not land in the wrong hands".

A collaborative investigation carried out by several media outlets exposed potentially far more extensive spying than previously thought using the malware from Israel's NSO Group, capable of switching on a phone's camera or microphone and harvesting its data.

Merkel welcomed a compromise with the United States, touched upon during her trip to Washington last week, over the controversial Nord Stream 2 project, but said there were still some "differences" between the two allies.

Nord Stream 2 has long been a sore point between the US and Germany with Washington concerned on an over-reliance on Russia, particularly as the White House fears Moscow may use the pipeline as a weapon against neighboring Ukraine. But Berlin has attempted to allay those fears during recent talks and said there was a good "willingness to compromise on both sides" of the Atlantic.

US and Germany reach deal on contentious Nord Stream 2

Trailblazer for women in politics

Merkel also addressed the topic of women in politics as she prepares to step down as chancellor later this year. She said there was a tendency among women politicians to want to be "more efficient," although there were exceptions to this.

Merkel, who has led Germany since 2005, told reporters in the capital that some other women had done much more for equality than she had, but that she believed she had achieved something.

The death toll following the devastating flooding in western Germany has risen above 150. Chancellor Angela Merkel has said Germany will "stand up to this force of nature."

German-American ties in spotlight as chancellor lands in Washington