More than 160 people have died as a result of last week's devastation, but with dozens more still unaccounted for, the death toll is expected to rise. Merkel has pledged financial assistance.

German Chancellor Angela Merkel visited some of the worst affected areas in North-Rhine Westphalia on Tuesday following last week's floods in the region.

Merkel, who was joined by State Premier Armin Laschet, had previously visited affected areas in Rhineland-Palatinate, where floods were confirmed to have killed 117 people as of Monday.

In North Rhine-Westphalia, the death toll by late Tuesday morning stood at 47, but dozens more are still unaccounted for in both states so the figure could still rise.

One person is confirmed to have died in Bavaria as a result of the floods.

Merkel spoke to representatives of aid organizations and helpers, as well as residents. She also visited a food distribution warehouse providing supplies to those who have been affected.

A huge financial aid package is being prepared for the affected region and Merkel said the federal government will do everything in its power to ensure that the money "reaches the people quickly. I hope that this is within a matter of days."

She recognized the "solidarity of the people" saying it was "the only thing that comforts" in the wake of such a disaster.

DW's Benjamin Alvarez said that "over a thousand German soldiers have been deployed over the last days to help with relief efforts in the flood regions, like here in Bad Münstereifel."

Meanwhile, top German officials have defended their handling of the country's worst flooding in decades, rejecting criticism that they did not do enough to warn locals in hard-hit areas of the country. 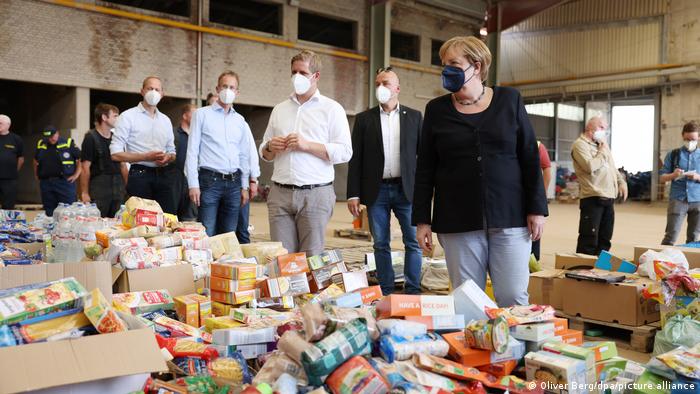 Some critics have called for mobile alerts to protect residents from natural disasters. During her trip on Tuesday, Merkel said a mobile alert system would not always be reliable.

"That obviously stops working when the mobile phone system fails," Merkel said of the idea. "And that happened extremely quickly."

How can we prepare for extreme flooding?

As the floodwaters recede following the devastating deluge in western Europe, survivors have begun the long, difficult process of cleaning up and rebuilding. But what can be done to reduce future risks?