Ahead of a critical meeting of the Bundesliga organizers on Thursday, documents have been leaked explaining how and when matches will return. Details of tests and new regulations provide plenty of talking points. 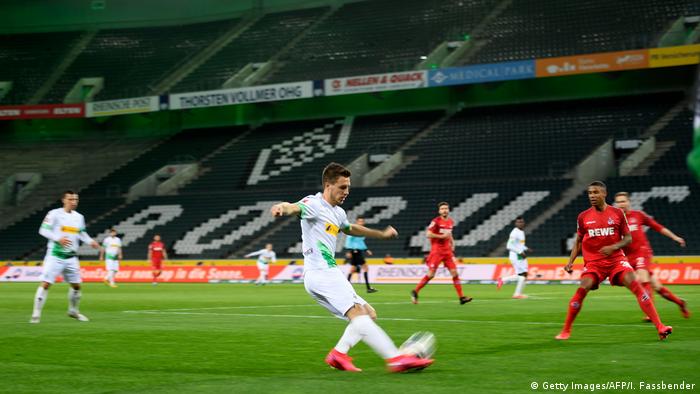 What does the risk of infection have to be in order to make this medically viable? That's the question likely to ripple out from the meeting of the DFB (German football association) and DFL (German Football League) on Thursday. A task force, headed by national team physician Tim Meyer, has reportedly drawn up a plan that outlines how clubs could return to team training and play so-called "Geisterspiele" (ghost games), or games played behind closed doors, in the Bundesliga, the second and third divisions and the Women's Bundesliga.

"It cannot be the goal to guarantee one hundred percent security for all concerned. Because that might turn out to be impossible," states a report leaked to several German media outlets in advance of Thursday's meeting. It's more a case of guaranteeing a "medically acceptable risk" in view of the social and economic importance of football — "under the strict premise that there is no competition with the general population for resources to control COVID-19."

While the framework for ghost games and training in teams are described in detail, information relating to the frequency of coronavirus tests on the players, coaches and referees is rather vague. At least once a week, tests will seemingly be carried out, "as close as possible to each match (i.e. at least twice in some game weeks) with an result arriving in good time before the players get to the stadium."

The document does not state exactly how long before kick-off a test may be carried out in order to qualify. But it does suggest "that no further measures are necessary on the field of play."

For both training and ghost games, the task force believes the following should apply: as few people in close proximity as possible, at as great a distance as necessary. During Bundesliga matches, a maximum of 322 people should be in and around the stadium on matchdays — about 100 in each of the three defined zones: inside the stadium, in the stands and outside the stadium. For second-tier matches, the total is 270. This includes not only players, coaches and referees, but also journalists, doping control officers, stewards, emergency services, groundskeepers and ball boys and girls. 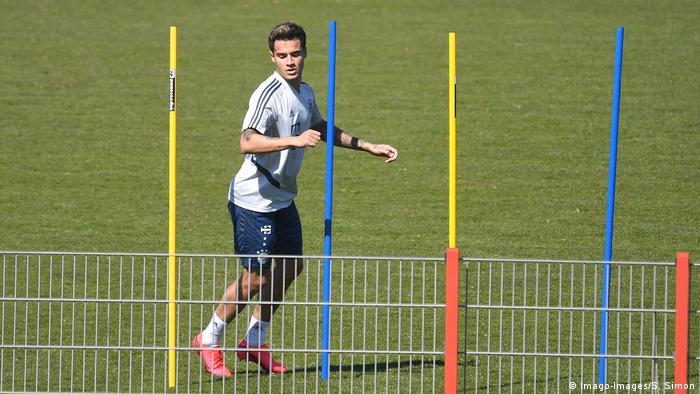 Bundesliga clubs have been training both virutally and in small groups

The teams will arrive at the stadium separately and at different times and many of the usual rituals, such as lining up alongside each other on the pitch, shaking hands or taking team photos will be abandoned. Mobile sinks are also to be set up in the stadium while protective masks are mandatory for medical personnel and all those involved in TV production. The mixed zone, in which post-match interviews are normally carried out, will remain closed while press conferences will only be conducted virtually. At the security-controlled entrance to the stadium, everyone's health status will be checked and their body temperature measured with an ear thermometer. Each club must have a hygiene officer on site who ensures that all hygiene requirements are met.

Two of the task force's recommendations in particular will likely provide ample material for discussion. "No automatic reporting of a positive [coronavirus] case to the press, since disease verification as well as clear documentation of suspected transmission routes take priority," the report states. This doesn't sound like a transparent approach to a pandemic situation.

In view of the close-knit medical control network among professional teams, the experts also consider the "abandonment of group quarantine" to be justified. In other words, the entire squad need not necessarily be automatically quarantined if a player is infected. In this context, the task force simply recommends "ensuring a sufficiently large squad in the season's run in at an early stage."

The organizers of the Bundesliga are set to discuss the possibility of resuming the league in early May with games behind closed doors. In the other four top leagues in Europe, a potential restart is less clear. (21.04.2020)

Bundesliga: What are coaches doing during the coronavirus?

In a world gripped by the coronavirus, there is no room for sport as we know it, but football coaches in Germany are trying to find ways to be innovative during this unprecedented period. (06.04.2020)

As the Bundesliga pursues plans for a May restart, it faces opposition from an unexpected source: fans. For many matchgoing supporters, the coronavirus crisis has revealed fundamental flaws in the modern game. (21.04.2020)