Thousands of police officers have been deployed in Cologne for Sunday's far-right demonstrations. A similar rally last year left dozens of people injured. 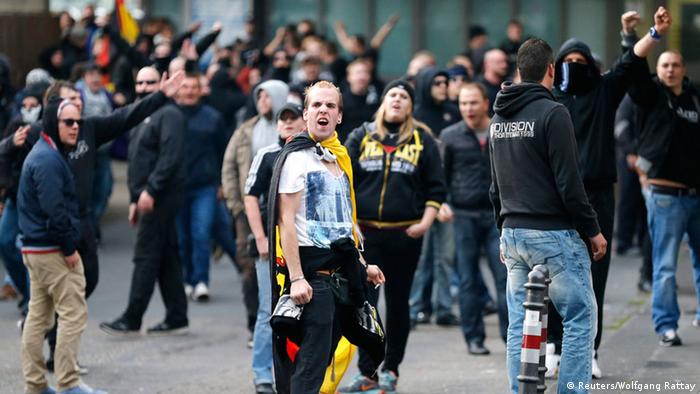 Some 3,500 officers are expected to be on the streets on Sunday in the northwestern city of Cologne to ward off possible violence.

Police are trying to prevent a repeat of clashes that took place last year during a demonstration organized by HoGeSa ("Hooligans against Salafists"). Several people, including 44 riot police, were injured during the clashes.

"We will do everything possible to keep the situation under control," said Michael Temme, a police operations chief, adding that they would take "strong action against perpetrators of violence."

The Cologne chapter of anti-Islamization movement PEGIDA has also called for a rally on the same day. "Sunday will be a difficult day, a difficult day for Cologne and for Cologne police," said the city's police chief Wolfgang Albers.

Thousands of refugees are traveling to Germany from conflict-ridden Middle Eastern countries, while several right wing groups are protesting against the government's pro-migrant policy.

Far-right violence in Germany has seen a sharp rise in the past few weeks. The country's security officials warned Thursday that asylum seekers, those who help them, and pro-immigration politicians could all become the targets of xenophobic crimes.

The police had sought a ban on Sunday's rally but a court ruled against it on Wednesday. The court, however, ordered the organizers to hold the demonstration at a fixed location rather than marching through the streets.