The UN climate talks in Copenhagen avoided a total collapse by skirting bitter opposition from several nations to a deal championed by the US and five emerging economies. 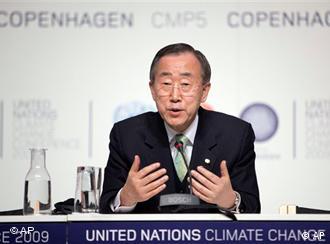 "The conference decides to take note of the Copenhagen Accord of December 18, 2009," the chairman of the plenary session of the UN Framework Convention on Climate Change (UNFCCC) declared on Saturday, swiftly banging down his gavel.

After bitter exchanges through the night, the summit chair reportedly forced through the deal using a procedural tool that effectively dropped all obstacles to the Copenhagen Accord.

According to the decision, countries in favor and against the deal would be listed. Under conference rules, decisions by the 193 participating countries are made by consensus.

The summit stopped far from a full endorsement of the plan, which sets a target of limiting global warming to a maximum two degree Celsius rise over pre-industrial times and holds out the prospect of $100 billion in annual aid from 2020 for developing nations.

However, the plan does not specify greenhouse gas cuts needed to achieve the two Celsius goal that is seen as a threshold for dangerous changes such as more floods, droughts, mudslides, sandstorms and rising seas.

United Nations Secretary-General Ban Ki-moon praised the deal struck at the summit, while admitting that it did not meet expectations.

"It may not be everything we hoped for, but this decision of the Conference of Parties is an essential beginning," Ban told reporters. 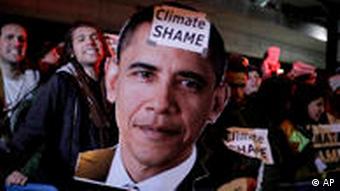 Activists have slammed the results of the talks as "abject failure"

The UN chief said that the Copenhagen Accord would be "immediately operational" as of January 1, adding: "We will try to have a legally binding treaty as soon as possible in 2010."

Critics point out that the decision at the 193-nation talks merely "took note" of the new accord, a non-binding deal for combating global warming led by the United States, China, India, Brazil and South Africa.

However, some experts say the move, which came a day after the climate negotiations were scheduled to end, clears the way for the accord to become operational in practice even though it has not been formally approved by the conference.

Earlier, during a stormy overnight session, the talks were on the brink of collapse after Sudan, Nicaragua, Cuba, Venezuela and Bolivia lined up to denounce the US-led plan following a meeting of about 120 world leaders on Friday.

The all-night plenary session, chaired by Danish Prime Minister Lars Lokke Rasmussen, hit a low point when a Sudanese delegate said the plan in Africa would be like the Holocaust.

The outcome may yield the initiative in forming world climate policy to the United States and China, the world's top two emitters of greenhouse gases.

Many nations said the deal fell far short of UN ambitions for Copenhagen, meant as a turning point to push the world economy towards renewable energies such as hydro, solar and wind power and away from fossil fuels.

European nations were lukewarm to a deal that cut out some goals mentioned previously in draft texts, such as a target of halving world greenhouse gas emissions by 2050.

The Copenhagen deal sets an end-January 2010 deadline for all nations to submit plans for curbs on emissions to the United Nations.

US President Barack Obama says a "meaningful agreement" has been reached at the Copenhagen climate summit. But the deal has received a lukewarm response from European leaders. (18.12.2009)

German Chancellor Angela Merkel has joined other heads of state in Copenhagen at the UN climate change summit. German politicians hope she will be able to bridge differences between the United States and China. (17.12.2009)