China is trying to highlight it is open to importing more at a time it is under pressure to open its markets further. Critics say it is more talk than action. 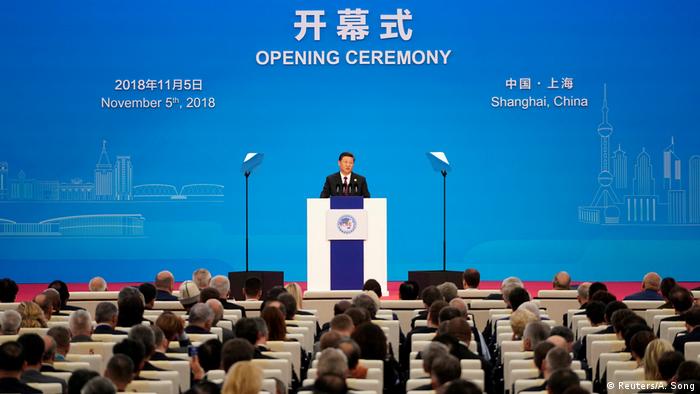 President Xi Jinping echoed previous pledges to open up China's market and lower tariffs as he opened a weeklong trade expo in Shanghai on Monday.

The first-ever China International Import Expo runs November 5-10, drawing more than 3,000 exhibitors from some 130 countries to Shanghai to show the import potential of the world's second largest economy and its 1.3 billion people.

In a keynote speech, Xi vowed to increase imports, lower tariffs, reduce non-tariff barriers to trade and protect foreign intellectual property. He also claimed that China would import $30 trillion (€26.3 trillion) worth of goods and $10 trillion in services in the next 15 years. However, the comments were short on specifics.

Critics say reforms to open up the Chinese market have been heavy on words but slow and far less wide-reaching than expected by foreign governments and businesses.

US President Donald Trump has applied pressure on China to open its market, level the playing field, close a trade gap and protect US intellectual property.  The trade showdown between Beijing and Washington has led each side to slap hundreds of billions of dollars in tariffs on each others' goods.

In apparent reference to the Trump administration's protectionist moves, Xi said "economic globalization is facing setbacks, multilateralism and the free trade system is under attack, factors of instability and uncertainty are numerous, and risks and obstacles are increasing."

The European Union, which shares US complaints of Chinese trade policy although it is against the Trump administration's hardball tactics of applying tariffs, has called for Beijing to open its market.

Ahead of the fair, the French and German ambassadors to China urged Beijing to take "concrete and systematic measures that go beyond tariff adjustments" to improve the business environment for foreign firms.

In a joint letter published in the Chinese business magazine Caixin, they also called on China to remove joint venture requirements for foreign firms and end economic policy that favors state-owned enterprises.

'Global Partners for Global Challenges' is the theme of the two-day summit in Brussels. Ministers from China, Japan and Russia have made the trip to reaffirm support for multilateral cooperation. (18.10.2018)

EU chief Juncker last week grandly promised US President Trump that Europe would buy more US soybeans and gas. In return the US would step back on car tariffs. But is the EU offering anything more than today's reality? (02.08.2018)