China's envoy in Washington bemoans US arms sale to Taiwan

Chinese officials have reacted angrily after the US announced it plans to sell $1.4 billion in arms to Taiwan. China's envoy to the US warned that US actions were undermining bilateral relations between the two. 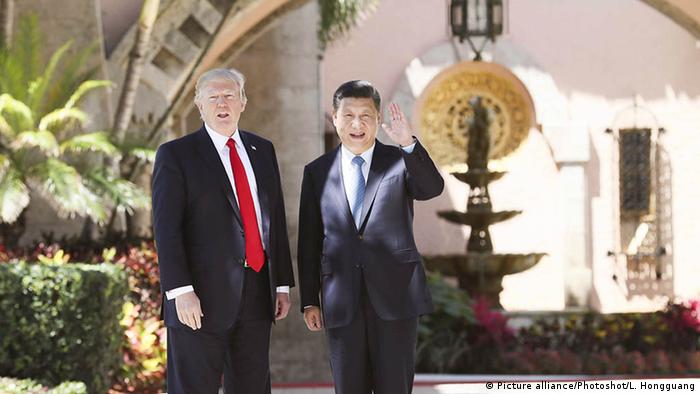 The Trump administration prompted outrage in Beijing on Thursday, after a series of actions signaled a hardened US approach to relations with China.

China's ambassador to Washington, Cui Tiankai, said that US arms sales to Taiwan and a recent series of sanctions against a Chinese bank had undermined bilateral relations between the two sides.

"And all these actions -- sanctions against Chinese companies and especially arms sales to Taiwan -- will certainly undermine the mutual confidence between the two sides and runs counter to the spirit of the Mar-a-Lago summit," Cui told reporters at an embassy reception in Washington.

US President Donald Trump hosted China's Xi Jinping at his Mar-a-Lago resort in April. While the two leaders were reported to have sparked a good rapport, relations appear to have soured on several fronts since.

The US State Department announced on Thursday that it would sell $1.4 billion (1.2 billion euros) worth of military equipment to Taiwan, including radar surveillance equipment, missiles and torpedoes.

The sale complied with the Taiwan Relations Act, US officials said, adding that the deal was based on an assessment of Taiwan's defensive needs.

"It shows, we believe, our support for Taiwan's ability to maintain a sufficient self-defense policy," State Department spokeswoman Heather Nauert said. "There's no change, I should point out, to our 'one-China policy.'"

The sale also came at a particular testing time. Relations between the Taiwan and Beijing have worsened since last year, following the election of Taiwan's independence-leaning premier, Lin Chuan. In response, China cut off its contacts with Lin's government and discouraged Chinese tourists from travelling to the island.

US slaps sanctions on China's Bank of Dandong

The arms sale coincided with the US Treasury's announcement that all ties between the US and China's Bank of Dandong would be completely severed.

The bank is alleged to have acted "as a conduit for illicit North Korean financial activity," according to the Treasury. Dandong will now be banned holding any accounts or doing business with US financial institutions.

Treasury Secretary Steven Mnuchin insisted that the move was not directed at the Chinese government. Rather, Dandong had been identified of "facilitating millions of dollars of transactions for companies involved in North Korea's WMD (weapons of mass destruction) and ballistic missile programs."

This leaves China in an awkward position. Trump had hoped that Beijing would be a key partner in reaching a peaceful solution to the nuclear threat posed by Pyongyang. However, the US president has since lamented Beijing's failure to reign in North Korea over its weapons program and signaled that the US may need to take action itself.

Trump and China's Xi are expected to meet at next week's G20 summit in Hamburg, Germany.