Tillerson asks China to 'step up' on North Korea

Beijing needs to do more to rein in North Korea and the global threat it represents, US Secretary of State Rex Tillerson said in Australia. He also said President Donald Trump wanted to "stay engaged" on climate change. 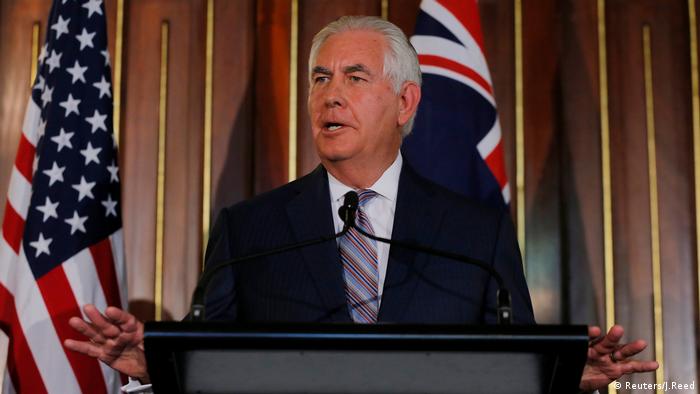 Pentagon chief Jim Mattis said China has upped efforts to rein in North Korea. But he also said that the US would not allow unilateral action by Beijing in the South China Sea. (03.06.2017)

Saudi Arabia, Bahrain, Egypt, the UAE and Yemen have severed diplomatic ties with Qatar over allegations that Doha supports terrorism in the region. Qatar lashed out at the decision, saying it has "no basis in fact." (05.06.2017)

US envoy: President Trump 'believes the climate is changing'

Donald Trump believes the climate is changing and that man-made activities are partly to blame, US envoy Nikki Haley says. Trump, who this week quit the Paris climate deal, previously called global warming a "hoax." (04.06.2017)

Visiting Australia with Defense Secretary James Mattis on Sunday, the US top diplomat Tillerson sought to reassure Canberra of the long-standing alliance with Washington.

With Australia close to the simmering conflict in the South China Sea, some politicians have expressed concern that the US might give concessions to Beijing in exchange for help on the North Korean threat.

"But we cannot allow China to use its economic power to buy its way out of other problems, whether it's militarizing islands in the South China Sea or failing to put appropriate pressure on North Korea."

He also urged Beijing and other countries in the region to "step up" their efforts to resolve the North Korean crisis, which threatens the entire world.

Australia a 'beacon of hope'

The two-day visit comes as Australia and the world still reel from Washington's rejection of the Paris climate accord.

Answering a question on Trump's apparent turn to isolationism, Tillerson said that his visit "demonstrates that it certainly is not this administration's view or intention to somehow put at arm's length the important partners and allies in the world."

Mattis, also appearing at the conference alongside Tillerson and Australian Foreign Minister Julie Bishop in Sydney, called Australia "a beacon of hope" for the world.

Tillerson also commented on the climate dispute between the US and the overwhelming majority of the world nations, saying that president was "not walking away" from climate change.

"He's simply walking away from what he felt was an agreement that did not serve the American people well," he said.

The US President is interested in "perhaps a new construct of an agreement," according Tillerson, because the climate "is still important and that he wants to stay engaged on the issue."

In addition to the crisis in Asia, the two US officials also commented on the ongoing crisis in the Gulf, triggered by the decision of several Arab nations to cut ties with Qatar over its alleged support to Islamist groups and links with Iran. Tillerson called on the Gulf countries to stay united and "address these differences." He added that it was unlikely that the strife would influence the fight against Islamic terrorism.