A US aircraft carrier is headed for the Korean Peninsula. This may get things moving in the conflict over Pyongyang's nuclear program, but it also makes the power games in East Asia riskier, says DW's Matthias von Hein. 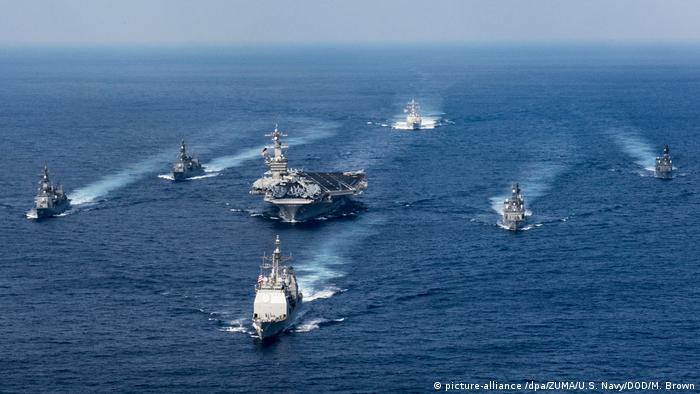 What is at least as dangerous as the Middle Eastern powder keg? That's right - the Korean one! That's what makes it worrying when US President Donald Trump, after firing 59 Tomahawk cruise missiles at a Syrian military air base, gives another show of military strength by sending the nuclear-powered aircraft carrier "Carl Vinson," with its roughly 6,000 crewmembers and 85 warplanes, to patrol off the Korean coast.

It is worrying because, in the case of this supposed demonstration of determination, we do not know what purpose it is meant to serve. It is also unsettling that even the missile attack on Syria did not seem to form part of a larger strategy - and that it took place just as Trump was sitting together with his Chinese counterpart Xi Jinping enjoying steak and Californian wine. Xi has to have understood the strike as the exclamation mark on Trump's remarks a few days before that the United States would possibly "solve North Korea" unilaterally.

Xi and Trump sat together for some seven hours in Florida. North Korea is bound to have been near the top of the agenda. But Trump was not able to convince his guest from Beijing to undertake concrete steps against Pyongyang, even though Beijing is increasingly annoyed about Kim Jong Un's wayward actions: North Korea carried out two atomic weapons tests last year alone. They were accompanied by dozens of missile tests, one of them even from a submarine.

This is not what Beijing considers to be a stable environment that is good for the economy, and still less the behavior of a good neighbor. Its repeated call for a Korean Peninsula that is free of nuclear weapons is believable. China backs the sanctions, tightened as recently as November, against the already isolated country. It has now again warned of fresh sanctions if Pyongyang carries out further nuclear and missile tests.

But importantly, more than anything else, Beijing fears the collapse of the regime in Pyongyang, millions of refugees and, ultimately, US troops possibly on its borders. North Korea, as the American foreign affairs expert Victor Cha already put it in 2010, is a "land of lousy options."

Trump will also have to come to this conclusion. But the US - unlike in Syria - really does have serious national security interests at stake with regard to North Korea. Pyongyang's missile tests often end in failure, it is true, but North Korean engineers can learn lessons too. The weapons are getting better. In a few years, they could reach the US, possibly with nuclear warheads on board.

However, whether the abandonment of the previous "strategic patience" as announced by US Secretary of State Rex Tillerson, coupled with threatening gestures, is the right way to counter this peril is another matter. The presence of American troops in South Korea is already a very visible build-up of military weight. Becoming involved in a game of poker with Pyongyang at an inopportune moment is dangerous. And you don't put out a fire that is only smoldering with gasoline even if it seems to be the only liquid within reach.

Like it or not: When it's a matter of threats, the North Korean regime is at an advantage, because it can use its own population as hostages. And it can take its South Korean brothers and sisters hostage as well. Some 25 million people - almost half of all South Koreans - live in and around the capital, Seoul. And it is within the range of North Korean artillery.

And as if the South Koreans didn't have enough to worry about, there is loud talk in US media, some of it stemming from hawkish ex-CIA chief James Woolsey, about "preventive nuclear strikes" on North Korea.

This would certainly be the lousiest of the lousy options. What might be the best of them would be offering North Korea something - even if that might stick in one's throat in view of the tyrannical regime in Pyongyang.

This idea has already occurred to Trump. During his election campaign, he boasted that he would eat hamburgers with Kim in the White House if it were necessary to solve the missile problem. A peace treaty could be a start. The Korean War has been over since 1953, but officially there is only a fragile cease-fire in place at the 38th parallel. The fact that North Korea is so highly armed is only partly the product of paranoia. And the atomic bomb is the guarantee of the regime's survival. Kim Jong Un will work all the more obsessively on it, the more threatened he feels from outside.

If a new security architecture were also to take into account Beijing's interests, it could bring China to put more pressure on Kim. But the North Koreans will have to get rid of their rogue regime themselves.