Human rights remain a topic of conversation between China and Germany, despite the Asian country's proverbial sensitivity to criticism. DW spoke with Markus Löning, Germany's commissioner for human rights policy. 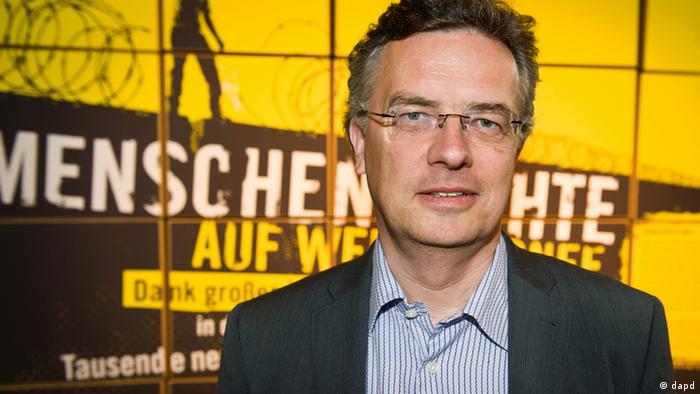 German and Chinese government officials met on October 9, 2012, in Wiesbaden, near Frankfurt, Germany, to discuss human rights, continuing a tradition of meetings that now total ten.

DW: There is a general impression that German-Chinese relations today are driven by economics. How important is the human rights dialog for your Chinese counterparts?

Markus Löning: They take it very seriously. This stems from the fact that they came to Germany, here to Wiesbaden, toured a correctional facility and met with a state prosecutor. So you can see that this is of importance to the Chinese and was also reflected in the composition of their delegation. It was headed by the deputy director of the foreign ministry and included a Supreme Court judge, high-ranking representatives from the Ministry of Public Security and the Justice Ministry. So you can see that the Chinese side took the dialog very serious, even though we were unable to achieve a consensus on everything we discussed.

One of the issues raised at the last human rights dialog in Guiyang in southwest China in 2011 was the situation in Tibet and also on how to deal with members of the Falun Gong - an extremely hot topic in China. What were the tricky issues this time?

Well, issues such as freedom of expression and, more generally, political rights are nearly always tricky. This time, we received a number of questions from the Chinese side pertaining to German issues, such as education for children of migrant families and police identification. Of course, these weren't tricky issues for us but they showed that the Chinese are interested in our situation.

Again this time, we talked about the Falun Gong situation. And we had a very intensive exchange of views on the Roma situation as part of a luncheon with Romani Rose, head of the Central Council of German Sinti and Roma. So there are a number of difficult issues, including the question of how to draw attention to the various human rights issues among themselves. The Chinese side always accuses us of loudspeaker diplomacy, and has difficulty with the fact that we debate things publicly.

We currently have a very prominent former Chinese prisoner in Germany, Liao Yiwu, who has received the Peace Prize of the German Book Trade. Was he a topic?

Yes, he was a topic. I made it very clear that it was absolutely intolerable, from a German government perspective, if the Chinese government tried to exert pressure on German private organizations or private individuals for awarding a prize to someone who is not in favor with Chinese officials.

Germany and China have maintained diplomatic relations for 40 years. Trade between the countries is booming. But shared values is another story. What can be done in this area to improve relations?

This area of human rights is very tedious and difficult. But from a German position, we need to recognize that the Chinese, on the one hand, are extremely repressive in dealing with people they perceive as enemies in the areas of freedom of expression and political rights. On the other hand, they have made progress with many social rights. It is also a human rights achievement to free hundreds of millions of Chinese from poverty and provide them with food, water and education. So it's a mixed picture. Progress in the area of social rights, of course, doesn't excuse repression in the area of political rights. We Germans have to see and evaluate the whole picture.

Is there already a date for the next human rights dialog, back in China?

I made it clear to the Chinese side that we would like to continue the human rights dialog next year in early summer. Foreign Minister Westerwelle will be travelling to China soon and will raise the issue. I assume we will continue the talks next year.

Forty years ago, the Federal Republic of Germany established diplomatic relations with the People's Republic of China. Nowadays, the disparate partners rely on each other more than ever before. (11.10.2012)