The Chinese foreign minister has said the two countries would maintain strategic strength despite the Ukraine crisis, and warned against interference from "third parties." 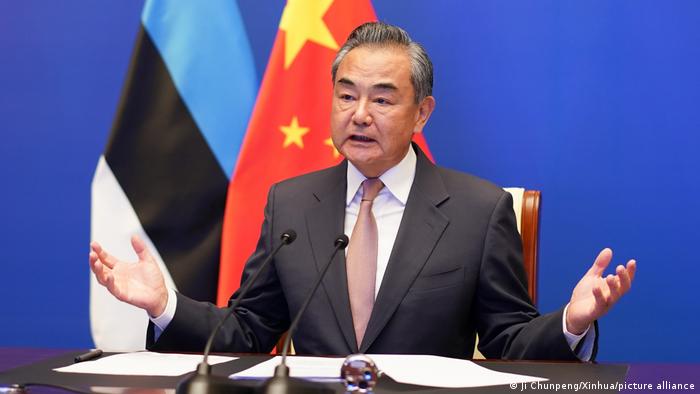 China on Monday reiterated its position on the Russian invasion of Ukraine, calling for all parties involved to engage in dialogue.

What China says about Russia's war in Ukraine

At a press conference explaining Beijing's position on the conflict, Wang said the causes of the "Ukraine situation" were "complex" and had not happened overnight.

"Solving complex problems requires calmness and rationality, rather than adding fuel to the fire and intensifying contradictions," he said.

Wang called on both sides to settle disputes by peaceful means, through dialogue and negotiation, and "respect and protect the sovereignty and territorial integrity of all countries."

"We must accommodate the legitimate security concerns of the parties involved," he said.

The countries involved should keep in mind the "long-term peace and stability of the region and put in place a balanced, effective, and sustainable European security architecture," Wang said.

What was said about ties with Russia?

Wang said Russia was Beijing's "most important strategic partner" and their bilateral relations were "conducive to world peace, stability, and development."

"No matter how sinister the international situation is, both China and Russia will maintain their strategic determination and continuously push forward the comprehensive strategic partnership of coordination in the new era," he said.

According to customs data revealed Monday, Chinese trade with Russia saw a surge in the run-up to the war in Ukraine.

Exports to Russia rose 41% in January and February compared to the same period in the previous year.

This was the fastest rate among China's major trading partners in the first two months of the year, outpacing trade with the European Union and the United States.

Russia was also the second-biggest source of imports for China, which buys energy products from its neighbor.

What role does China intend to play in Ukraine?

China offered to act as a mediator in the conflict and has previously denounced trade and financial sanctions against Russia.

"China is prepared to continue to play a constructive role to facilitate dialogue for peace and work alongside the international community to carry out necessary mediation," Foreign Minister Wang said.

He also announced that China's Red Cross will provide humanitarian aid to Ukraine "as soon as possible."

Both China and Taiwan have rejected the conflation of Ukraine with the island of Taiwan, albeit for different reasons.

Beijing considers Taiwan to be a part of China despite it having its own democratically-elected government, and has vowed to bring Taiwan back under Beijing's direct control.

Taiwan believes the comparison is not suitable because, as a major global producer of highly sought-after microchips, Taiwan plays a more important geopolitical role.

But China's Foreign Minister Wang said on Monday that the situations in Taiwan and in Ukraine are "not at all comparable" because, for China, Taiwan is a domestic issue.

"We have seen that some people emphasize the principle of sovereignty on the Ukraine issue, but continue to undermine China's sovereignty and territorial integrity on the Taiwan issue. This is a naked double standard," he said.

But the foreign minister went on to repeat Beijing's aim: "In the end Taiwan will return to the embrace of the motherland."

China must act against the war: Australia

Australian Prime Minister Scott Morrison has called on China to end its tacit political and economic support for the war by backing Western sanctions.

"No country will have a bigger impact on concluding this terrible war in Ukraine than China," he said.

"I was listening for the voice of the Chinese government when it came to condemning the actions of Russia and there was a chilling silence," Morrison.

Other Western nations have called on China to play a more active role in mediating the crisis.

In an apparent response, the Chinese foreign minister said its informal alliance with Russia would "not brook interference by third parties."

What was China's response to the invasion?

Beijing called for restraint on all sides after Russian President Vladimir Putin sent his troops into Ukraine in late February.

"China is closely watching the latest situation, and we call on all parties to maintain restraint and prevent the situation from getting out of control," a foreign ministry spokeswoman said at the time.

The Chinese government has refused to describe the military attack as an invasion and called on Western countries to respect Russia's "legitimate security concerns."