China leading the way in solar energy expansion as renewables surge | Environment| All topics from climate change to conservation | DW | 07.06.2017

The development of renewable energy is setting new records, with solar power now becoming cheaper than energy from new coal or nuclear plants. China and other players in Asia are making serious inroads into the market. 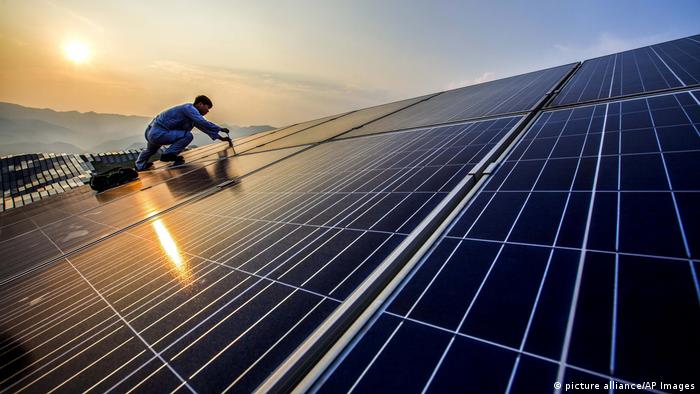 The annual report, published by the Renewable Energy Policy Network for the 21st Century (REN21) on Wednesday, said that 161 gigawatts (GW) had been installed worldwide in 2016, bringing global capacity to nearly 2,017 GW - an increase of almost 9 percent over 2015.

Solar power represented around 47 percent of that capacity, with wind at 34 percent and hydropower at 15.5 percent.

"The world is adding more renewable power capacity each year than it adds in new capacity from all fossil fuels combined," said Arthouros Zervos, chair of REN21, in a press release. 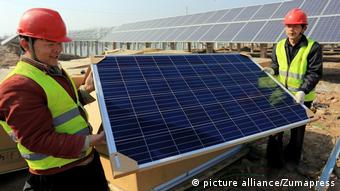 Solar generation, in particular, is surging worldwide at a much faster pace than expected, according to the latest Global Market Outlook.

The report, published annually by industry association SolarPower Europe, provides a comprehensive overview of projects in the photovoltaic sector. It predicts the solar boom will continue, with a steadily climbing number of new solar systems coming online each year.

This year, they expect plants capable of generating a total 81 GW of solar power to be added to global production. That's compared to 77 GW added in 2016 and 50 GW in 2015. A decade earlier, it was just 1 GW.

If the pace of growth doesn't slack off, the report notes, solar power generation could double by the end of 2019 and triple by 2021.

China is one of the driving forces behind the solar power boom. Last year, around 45 percent of the world's new solar installations were built there. The United States, Japan and India were also top adopters of the technology, albeit significantly behind China.

Germany, once considered a solar energy pioneer, is lagging even further behind. In 2016, for example, it installed just under 2 percent of the world's new solar capacity. It's now ranked sixth in the world - after surrendering the top spot to China in 2015.

Other European countries have also dropped off in recent years. In 2012, more than half of all solar systems were installed in Europe, but that's no longer the case. 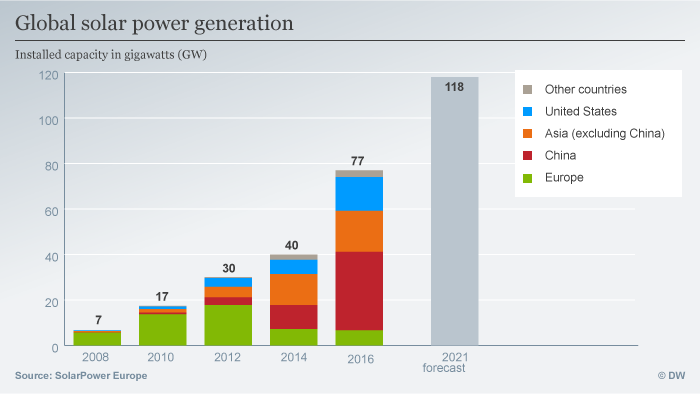 "The Chinese government has consistently accelerated its development of solar energy for small and large plants, building solar power up into a strategic industrial sector," James Watson, the chief executive of SolarPower Europe, told DW.

"China has invested a whole lot in these technologies, knowing that these are the future cornerstones of the power supply. Ten years ago, in Europe and the United States, they also had a chance to do this."

The falling price of solar technology has also bolstered growth. In 2010, solar energy cost up to 35 cents per kilowatt hour. Now, countries with lots of sunshine, like Saudi Arabia and Chile, are building large solar plants generating electricity for 2-3 cents per kilowatt hour. It's even cheap in Germany, which doesn't get nearly as much sunshine.

"We've submitted our bid for a large solar power system and we've seen that the price in Germany is around 6 cents per kilowatt hour," says Udo Möhrstedt, head of German energy company IBC Solar. "And in India, generating electricity at our projects costs 4.6 cents."

According to the SolarPower Europe report, electricity from large solar plants costs half as much as power from new coal and nuclear plants. It's also got an advantage over gas.

The REN21 report noted that mini-grids and stand-alone energy systems are evolving rapidly, as is the growth of pay-as-you-go business models supported by mobile technology.

Explaining the move, Innogy CEO Peter Terium said the company wanted to "further develop energy demand and open up new perspectives." He added that photovoltaic projects with a total capacity of 1,000 megawatts for the Gulf region were already in the pipeline. 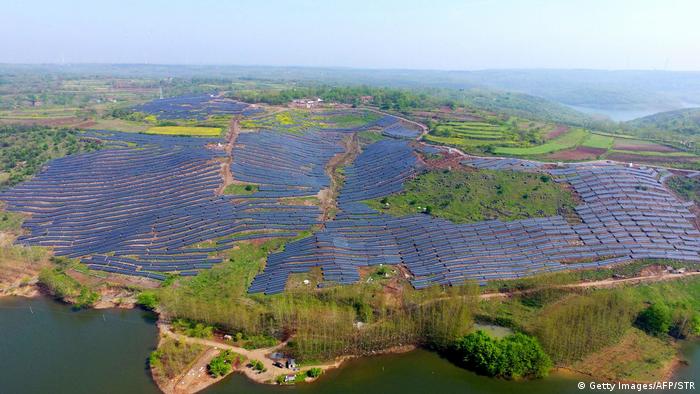 Thus far, Europe, Asia and the United States have been mainly responsible for the expansion of solar power. Over the next five years, according to the Global Market Outlook report, solar power generation will double, or even quadruple, in China and the US. In Europe, it's expected to increase by around 50 percent.

India is also stepping up its investment in solar in line with a plan to stop constructing new coal-fired power plants. The report says the current 10 GW of solar power it's installed could increase to around 76 GW in the next five years.

Meanwhile other countries, including Brazil, Mexico, Algeria, Egypt, Saudi Arabia, Ireland, Sweden, Turkey and Pakistan, are only just beginning to enter the market.

The Paris Climate Agreement signed in 2015 has also added to the momentum. "Meeting the Paris target of limiting global warming to 1.5 degrees is going to take a huge effort," Watson stressed. "At the Paris Climate Conference there was a great deal of awareness shown by our governments, and it's this awareness that will bring solar development many benefits."

However, the REN21 report cautioned that the transition to renewable energy is not happening fast enough to achieve the goals of the Paris agreement. It said that investment in the sector has dropped, with funding for new renewable energy installations down 23 percent compared to 2015.

In developing and emerging markets, renewable energy investment - primarily in wind and solar - fell 30 percent to $116.6 billion (103 billion euros) in 2016. In developed countries, investment dropped by 14 percent to $125 billion. The REN21 report pointed out that subsidies for fossil fuels and nuclear power still "dramatically exceed those for renewable technologies."

"The world is in a race against time. The single most important thing we could do to reduce CO2 emissions quickly and cost-effectively is phase out coal and speed up investments in energy efficiency and renewables," said Christine Lins, REN21 executive secretary.

"When China announced in January that it was cancelling more than 100 coal plants currently in development, they set an example for governments everywhere: change happens quickly when governments act - by establishing clear, long-term policy and financial signals and incentives," she said.

How Trump's unreliability is pushing EU and China closer together

At a time of great flux in global politics, the EU and China want to show they are willing to work together to tackle the daunting challenges facing the world, from trade and investment to security and climate change. (01.06.2017)

China is increasing the use of solar and wind energy production while coal consumption has fallen again. It 'reinforces China's growing status as a global climate leader' according to Greenpeace. (28.02.2017)