China condemned the tariffs as "a serious attack" on the international trade system, while Japan warned that the tariffs regime could hurt economic relations with the US. Several countries say they should be exempted. 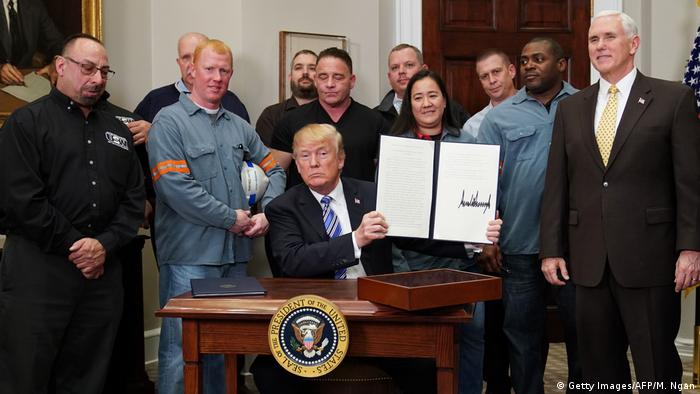 President Donald Trump signed his controversial steel and aluminum tariffs plan on Thursday, drawing wide rejection from the international community and among politicians and business groups in the United States.

The tariffs would go into effect in two weeks and in the meantime, the US could expect to see a number of countries requesting to be granted exemptions.

US Secretary of Commerce Wilbur Ross defended the policy of tariffs in an interview with television broadcaster CNBC, saying that the 25 percent steel and 10 percent aluminum tariffs were necessary to counteract China's trans-shipment of products through third countries.

The industry group Alliance for American Manufacturing (AAM) hailed the imposition of tariffs. "America's steel and aluminum workers and companies will stabilize after years of unfair competition, regain market share and even hire more workers," AAM president Scott Paul said in a statement.

The optimism was not shared by other US industries that could be affected by retaliation from other countries, or even a trade war. Gary Shapiro, president and CEO of the Consumer Technology Association, which represents more than 2,200 US companies, reflected these concerns. "Today's action could ultimately cost far more American jobs than it would create, and raise costs on consumer products," Shapiro said.

US automaker Ford, among the businesses with the most at stake, echoed the warnings on rising costs. "Despite the fact that Ford buys the vast majority of its steel and aluminum for US production in the US, this action could result in an increase in domestic commodity prices — harming the competitiveness of American manufacturers," the company said.

Republicans in Congress maintained their opposing stance on Trump's tariffs and urged the president to take a more surgical approach to tackling the problem of China's flooding of global markets with cheap steel. House of Representatives Speaker Paul Ryan worried about the "unintended consequences" that the action could bring.

Senator Jeff Flake, who has clashed with the White House before on other issues, strongly condemned Trump's tariff implementation, saying that "Congress cannot be complicit as the administration courts economic disaster" and vowing to introduce legislation that would nullify the tariffs.

China denounced the US tariffs and warned of the profoundly harm they would cause to the international trade environment.

The Ministry of Commerce expressed China's firm opposition in a statement released on Friday. "The US's "abuse" of national security concerns as a reason for implementing the measures will lead to "a serious attack on normal international trade order," the release read.

French Finance Minister Bruno Le Maire spoke out against the tariffs, insisting that "there are only losers in a trade war." Le Maire added that France would join its European counterparts to "assess consequences on our industries and agree (an) appropriate response."

Japan criticized the tariff imposition and deemed it "regrettable." Foreign Minister Taro Kono said that the measure could have "a grave impact on the economic relationship of Japan and the US," as well as the global economy.

UK Secretary of State for International Trade Liam Fox said that it made "no sense" for the US to impose tariffs on Britain. He added that the tariffs were "doubly absurd" considering that the UK is only responsible for one per cent of America's steel imports.

EU threatens US with tariffs on popular products

The White House exemption for Canada and Mexico has opened the door for other countries that feel they should be granted one too. Brazil, Argentina and the EU responded to Trump's tariffs on Thursday by saying they would request an exemption.

Acting Trade Minister Marcos Jorge told the Reuters news agency that he expected Brazil to be included in the group of exempted countries. The South American nation is the second steel supplier to the US, after Canada, having exported $3 billion worth of iron ore-based products to the US.

Jorge did not rule out taking the matter to the WTO, saying that all options were on the table "to protect the national interest."

Argentina's Foreign Ministry expressed confidence that it would join the exemptions list. "Argentina is not the cause of, nor does it, contribute to the distortions that affect US and world markets," the Foreign Ministry statement read, arguing that Argentina accounted for only 0.6 percent of US steel imports and 2.3 percent of its aluminum imports.

EU Trade Commissioner Cecilia Malmstroem reacted to the signing of the tariff plan arguing for the block to be exempt. "The EU is a close ally of the US and we continue to be of the view that the EU should be excluded from these measures," Malmstroem wrote on Twitter.

"I will seek more clarity on this issue in the days to come," she said, adding that she will be holding a meeting with US Trade Representative Robert Lighthizer in Brussels on Saturday.