Punitive tariffs! Trade war! Dissonant bells are ringing from both sides of the Atlantic. Despite the hullabaloo, Trump's tariffs will neither save the US steel industry nor sink that of Europe, says DW's Henrik Böhme. 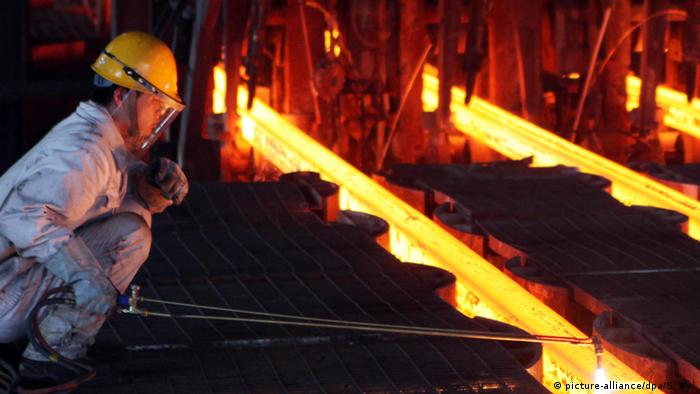 Maybe US President Donald Trump just needed to change the subject, to get the press off the scent of the continuing staff chaos in the White House, this time associated with the departure of Hope Hicks, his head of communications. What topic could drive that out of the headlines? Well, a bit of economic nationalism wouldn't hurt. Something to feed the Trump voter base.

And so, in the wake of a meeting with representatives of the steel industry, where the stakeholders wanted to exchange views again about the pros and cons of punitive tariffs, Donald Trump let the cat out of the bag.

He said he would introduce punitive tariffs on all steel and aluminum imports into the United States. In the coming week, he will sign the relevant decree, with his usual grandiloquence and symbolic gestures. One imagines he might have a signing ceremony surrounded by hard-hat-wearing steelworkers from the Rust Belt, the states in the northeastern US that were once the heart of the US steel industry. Many people voted for Trump there.

Now we have to wait a few days for Trump to sign the decree before we can get a clearer handle on the likely consequences, because the details are as yet unclear. That provides a few days' time for the European Union to work up a list of countersanctions. Onward to the trade war!

There's great excitement on this side of the Atlantic. Millions of dollars in losses for potentially affected companies are predicted. Thousands of jobs in Europe are at risk. What the president, who is committed to fair trade, is doing with these proposed tariffs is unfair. It is a violation of the rules of the World Trade Organization (WTO). And so on. The usual memes are being trotted out — not only by officials in Germany, but also by their colleagues from the European Union, from Canada (which is not surprising, given that 85 percent of Canadian steel exports go to the US), and from Brazil (also an important supplier to the US market).

Donald Trump doesn't care. He has, to no one's surprise, only the domestic steel and aluminum producers and markets in mind, because he is an anti-globalist. Ten US steel plants have closed in the last 20 years, and thousands lost their jobs — that's what interests him. This has occurred over a period during which world steel production has increased by almost 130 percent. The main driver is China, which has created a dramatic oversupply of raw steel on the world market due to the gigantic overcapacities it has built. China, too, is trying to protect its steelworkers' jobs.

Now, it's true that American steelmakers could have reacted to the supply glut by switching their focus, by specializing in high-value special steels, for example, or by trying to convert from steel companies into multiproduct industrial groups. In Germany, that strategy is currently being attempted with some success by ThyssenKrupp.

But they didn't adapt, by and large. Instead, they simply shut down operations. Of course, one cannot blame Trump for that. The president has said almost apologetically that he was not angry at the other steel-producing countries; they had just made the better deals. And self-declared master dealmaker that he is, he proclaimed that he'll change that, so that America gets the better deals.

However, a deal always includes at least two parties, and in times of global trade, usually many parties. One can therefore assume that Trump's protectionist intervention will lead to dislocations in global steel and aluminum trade flows because the companies which are now threatened with punitive tariffs by the US will seek out other markets. So it could well be that a new steel glut will bear down on Europe from China's shores.

It's far from clear whether Trump's plan to create thousands of jobs in the US steel and aluminum sector will lead to an overall net increase in US employment. It's possible the tariffs will boomerang and make products in the US more expensive, as well as lead to counter-tariffs.

The thing with the solar panels

So now could be the hour of the multilateral organizations, the WTO or the G20, the group of the top 20 industrial and emerging economies. Since the G20 summit in 2016, there has been a working group discussing overcapacity in the global steel market. It has had few concrete results. The Chinese have cut back on their production, but not by very much.

And the World Trade Organization? Well, it's a paper tiger that has been trying to set up a world trade agreement for what seems like an eternity. Certainly, the countries affected by the punitive tariffs can now file a complaint in Geneva at the WTO headquarters. But that won't cause Donald Trump to lose any sleep; he considers the WTO to be just another of those superfluous, expensive, inefficient bureaucracies that get in the way of "America First."

Perhaps the president could ask his advisers about how things have worked out for the European solar panel industry in the wake of the Europeans' having successfully launched an anti-dumping case against the Chinese under WTO rules, because subsidized Chinese solar modules had routinely driven European manufacturers out of business. In the end, the EU imposed punitive tariffs, just like the US intends to do in relation to steel and aluminum. But it was too late. None of the insolvent European solar module manufacturers that had been driven out of business by Chinese price dumping rose, phoenix-like, from the ashes of their bankruptcies.

Or just think of former US President George W. Bush. Back in 2002, he imposed a tariff of 30 percent on steel imports. But the move backfired as thousands of American steelworkers lost their jobs.