US President Donald Trump’s planned tariffs on steel and aluminum have met with massive outrage, and have sparked concerns that the measure will distort trade, cost jobs and ultimately lead to a tit-for-tat trade war. 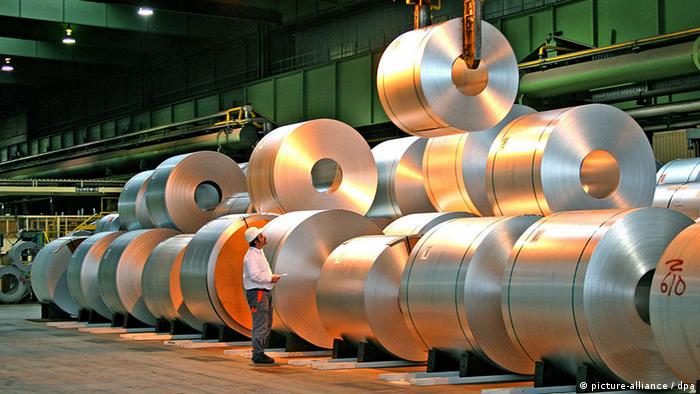 After weeks of speculation, Donald Trump on Thursday followed through on his campaign pledge to protect American industries from "unfair" global trade practices as he announced stiff new tariffs of 25 percent on steel imports and 10 percent on aluminum.

The trade measure, due to come into force next week, was greeted with fury by key US trading allies such as Canada, the EU, Australia and Mexico.

European Commission chief Jean-Claude Juncker led the criticism, saying the EU "will react firmly" to defend its interests. "We will not sit idly while our industry is hit with unfair measures that put thousands of European jobs at risk," he added.

"If the Americans impose tariffs on steel and aluminum, then we must treat US products the same way," Juncker argued. "I'm not saying we have to shoot back, but we must take action," he told German TV stations Friday.

The EU's top trade official, Cecilia Malmstrom, said the bloc would consider imposing its own "safeguard" tariffs on imports of steel and aluminium in response to US President Donald Trump’s decision. In an interview with the Financial Times,  she said officials in Brussels would wait to see the formal announcement of US tariffs next week before taking any action.

Canadian Trade Minister Francois-Philippe Champagne responded even more bluntly. "Any tariffs or quotas that would be imposed on our Canadian steel and aluminum industry would be unacceptable [and] would have an impact on both sides of the border," he told parliament on Thursday.

Trump has long threatened to impose tariffs on steel and aluminum, accusing other countries of dumping and deploying "unfair" trade practices. He's been particularly critical of China, whose steel producers are being accused of fueling a global steel glut by dumping their subsidized steel on markets worldwide.

The timing of Trump's announcement was especially provocative for Beijing because its top economic envoy Liu He was in Washington and holding meetings at the White House on Thursday.

Read more: US, China still at odds over steel overcapacity

China, which accounts for only 2 percent of US steel imports, has previously warned it was ready with countermeasures should the Trump administration deploy tariffs. On Friday, Beijing called on the US administration to "abide by multilateral rules and to make contributions to the trade and economic world order."

"If other countries follow in the steps of the US, it will harm global trade," said Hua Chunying, the Chinese foreign ministry spokesperson.

The vice secretary-general of the China Iron and Steel Association simply shrugged off Trump's decision. "The impact on China is not big," said Li Xinchuang. "Nothing can be done about Trump. We are already numb to him."

But for South Korea — the third-largest steel exporter to the United States after Canada and Brazil — the trade measure is more threatening.

"For us, the worst case scenario was a 54 percent tariff," a South Korean trade ministry official who declined to be named told the news agency Reuters. "Still if the option for a global tariff of at least 24 percent is taken, that will still affect our steel exports to the US," he added.

Asian steelmakers fear the US tariffs could result in their domestic markets becoming flooded with steel products that have nowhere else to go. "We are concerned about how other exporters react, what will happen with steel that cannot be sold to the US," Vikrom Wacharakrup, Chairman of Iron and Steel Industry Group, Federation of Thai Industries, told Reuters.

The move to protect American metals producers threatens to raise prices for consumers and businesses that buy goods made with the raw materials. Mickey Levy, analyst with Berenberg Bank said in a note to investors that the tariffs would add uncertainty to business plans in certain industries, for example in the automibile sector,

"Assuming the supplies of US-sourced steel and aluminum are fairly inelastic in the short run, and incorporating disruptions and costs of transitions, business operating costs would rise and business production processes would be less efficient," he noted, adding that the measures' impact on the economy would be a decline in American consumers' purchasing power.

And Tom Porcelli from RBC pointed out that Trump's jobs argument wasn't plausible because there were far more US jobs in businesses that pay money to buy steel than there are in businesses that produce it. "There are 415k people employed in primary metal manufacturing and metal ore mining businesses. Yet the folks in downstream manufacturing (ie the consumers of steel) employ 16x (!) as many people," he said in a note, adding that it was rather obvious that "the winners/losers ratio seems extremely skewed."

Therefore, the heads of the National Tooling and Machining Association and the Precision Metalforming Association were among many steel users that warned of the damage that could be done by the import duties. They said in a joint statement: "President Trump campaigned on the promise to protect manufacturing jobs but his plan to impose tariffs will cost manufacturing jobs across the country."

And Dennis Slater, president of the Association of Equipment Managers, added: "Tariffs or quotas on steel and aluminium imports will burden US manufacturers with higher costs while our competitors in China, India and Mexico will get a free pass to use the cheapest input materials they can find."

Economists at Barclays Bank estimated the levies could reduce US growth by as much as 0.2 percentage point this year and inflation by 0.1 point.

The US Commerce Department has said in a report to President Trump that imposing high tariffs on steel and aluminum imports from China and other nations could help fight a global glut. China called the report "baseless." (17.02.2018)