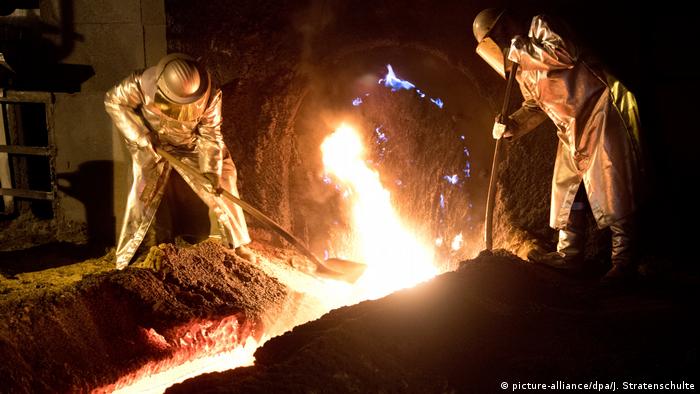 US President Donald Trump said Thursday the United States would impose tariffs of 25 percent on steel imports and tariffs of 10 percent on inbound aluminum shipments next week.

"We're going to be instituting tariffs next week," Trump said, adding they would be in place "for a long period of time."

The announcement came after several top US steel and aluminum executives were invited to the White House Thursday to debate the measures. Donald Trump had weighed options to impose tariffs or introduce quotas on cheap steel and aluminum imports that he said were "decimating US producers."

In a tweet earlier on Thursday, Donald Trump did not single out any country, but his words came as Chinese economic adviser Liu He and his delegation were due to meet with US Treasury Secretary Steven Mnuchin at the White House.

In its recent investigations into the national security risks of the global oversupply of steel and aluminum, the US Commerce Department had laid out an array of possible punitive options, including a tariff of around 25 percent on all steel imports worldwide and a lower tariff on aluminum imports.

Commerce Secretary Wilbur Ross had also mentioned the option of imposing either high tariffs or quotas on steel and aluminum imports for a number of countries including China, Mexico, South Korea and Russia.

But higher tariffs are not necessarily in the interest of US industries. Executives had urged the administration to exercise care since high import duties could raise the cost of supplies considerably.

However, the Commerce Department had insisted all along the goal of any punitive measures would be to boost domestic aluminum and steel producers.

While US steelmakers have lost three-quarters of their jobs between 1962 and 2005, a major study by the American Economic Association showed that much of this had been due to improved productivity as output per worker rose fivefold.

"Thus, even if trade protection leads to increased domestic production, increases in employment may be far less than many hope," a report from the independent Econofact economist network argued.

The mere investigations by the Commerce Department into who's to blame for the current production glut had prompted a number of countries to start mulling effective counter-measures and possibilities of retaliation.

Juncker said the EU would "react firmly" to defend its own interests with a proposal in the next few days "for WTO-compatible counter-measures."

The Federation of German Industry (BDI) said Thursday the announced tariffs were wrong. "Donald Trump is risking global trade conflicts and a spiral of protectionism, which in the end will also cost American jobs," BDI President Dieter Kempf told the DPA news agency.

The German Steel Association said the fresh tariffs "violate the rules of the World Trade Organization," adding that "now the EU must resolutely proceed against this with the instruments the WTO provides."

China for its part has been investigating US imports of sorghum and is considering restricting soybean imports. It has, however, not directly reacted to Trump's tariff announcement. Chinese markets also appeared to be largely unfazed on Friday.

Tariffs hurt US manufacturers, too

Japanese car giant Toyota warned that US steel and aluminum tariffs would harm automakers and "substantially" increase the price of cars sold in America as it will push up prices of imported steel and aluminum, which US-based manufacturers depend on.

Wall Street stocks fell sharply with the Dow Jones down 1.7 percent and the Nasdaq composite down 1.3 percent on worries of a trade war following the announced tariffs.