Social media users have complained about the use of a live hog to mark the opening of a bungee jumping attraction near Chongqing. The pig was attached to a bungee cord before being pushed from a height of 70 meters. 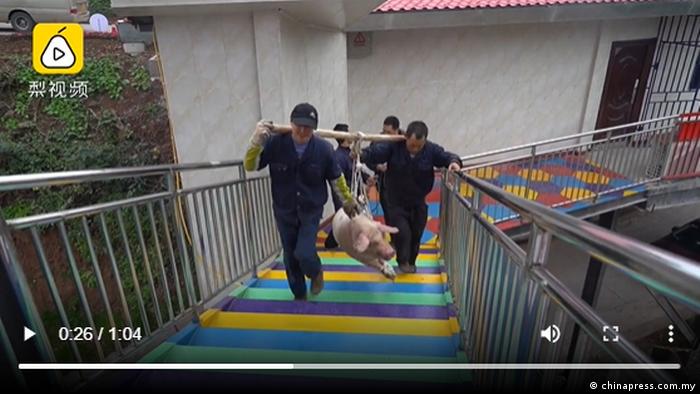 A Chinese theme park has defended its decision to inaugurate a new bungee jumping attraction by pushing a live pig off a tower.

Chinese media reported that the 75kg (165lb) hog was hauled by four men to the top of a metal stairway, then tied up in a harness and hurled off a platform 70 meters (230 feet) high.

China's Global Times said video footage of the event on Saturday showed the pig lying seemingly unconscious on the floor after being freed from the bungee cord after the jump.

The paper reported that people were heard cheering and laughing as the animal hurtled towards the ground.

Chinese social media users, on the other hand, were less than impressed with some calling for the owner of the theme park to be the ride's guinea pig, instead.

"To tie up its boss and throw him down would be much more entertaining," one user said on Weibo. 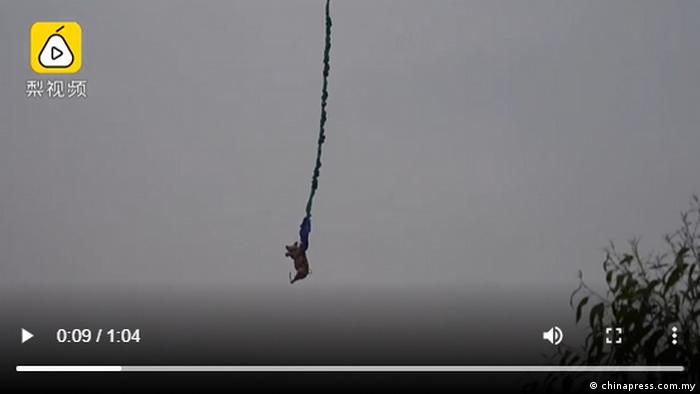 Another wrote: "It was miserable for the animal! It's a disgusting marketing idea to attract attention by abusing a pig!"

"It's not funny at all. It just shows what human beings can do when they get bored," wrote a third user.

The owner of the Meixin Red Wine Town theme park, near Chongqing Municipality, was cited by China's The Cover news site as saying: "We let the pig make the first jump because pork prices have been very high this year and recently they dropped a bit."

A public relations officer was cited by the South China Morning Post as saying that the stunt was "just a bit of entertainment," and that the animal was going to be slaughtered for a Lunar New Year banquet anyway.

China has no laws on animal rights, and the ill-treatment of animals by the public is not unusual for sport and tourism purposes.

The bungee stunt prompted calls for new legislation to prevent animals from being used for similar performances.

"Forcing a pig to do this just for fun seriously violates our basic respect for life," animal welfare activist Jiang Hong told the Global Times.

The stunt coincided with the end of the Chinese zodiac's Year of the Pig as the world's most populous nation gears up to ring in the Year of the Rat on January 25.

The world's largest human migration is already underway across China with airports and railway stations heaving with people trying to return home for the holidays.

Pork prices, meanwhile, are expected to remain high during this year's festival following a huge African swine fever outbreak in the country that has killed hundreds of millions of pigs.

The New York Times estimated earlier this month that a quarter of the world's pigs have been killed by the epidemic in China.

The president of the World Organization for Animal Health has called it the "biggest threat to any commercial livestock of our generation." The global price of pork and pig-based products is expected to skyrocket. (31.10.2019)

Growth in the world's second-largest economy has fallen to its lowest level since 1992, raising the specter of more layoffs in the months ahead. Many are wondering now how many jobs China can lose before unrest erupts. (17.01.2020)

African swine fever: What you need to know

It's a virus that kills pigs and stays contagious in the ground for years. Those are two of the most important facts about African swine fever. Here's more. (28.01.2019)

Myanmar: Reporter placed in chokehold as 6 journalists charged 3h ago