China blocks ′Egypt′ from Internet for fear of Tiananmen | World | Breaking news and perspectives from around the globe | DW | 04.02.2011

As images of the protests in Cairo flood the Internet, China has prevented its 450 million Internet users from looking up "Egypt" in search engines. Chinese citizens have to accept a state-sanctioned version of events. 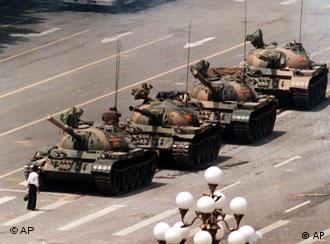 The Communist Party has blocked the keyword "Egypt" from China's two most popular search engines: www.sina.com and www.sohu.com . While the search for Germany and France return results as normal, the search for Egypt - one of the world's oldest civilizations - returns an error message.

Beijing has not completely blacked out reporting on the uprising in Egypt. Instead, the Chinese government is funneling coverage of the protests through state-run television and the official Xinhua News Agency. However, the coverage that reaches Chinese citizens focuses primarily on the "lawlessness and anarchy" in Egypt's streets.

"The events in Egypt are being reported on intensively," Adrienne Woltersdorf, the head of Deutsche Welle's Chinese Service, said. "However, the Chinese government decided from the very beginning that the reporting would only come from the state news agency Xinhua or at the most from the foreign ministry's website. There is a heavy emphasis on how the Chinese authorities are flying its citizens out of Egypt and back to safety." 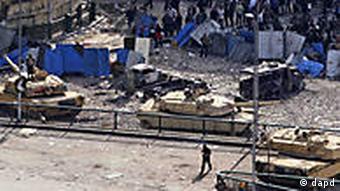 As the Chinese government evacuates its citizens from Egypt, the state media has largely focused on the instability that has ensued since the protests began. The Chinese state newspaper "Global Times" reported Monday on Hosni Mubarak's meeting with his new cabinet and that the military had called upon the demonstrators to end the protests.

"What they are putting in the foreground is the chaos and the upheaval," Joerg Rudolph, a political scientist at the East Asian Institute of the University of Applied Sciences in Ludwigshafen, told Deutsche Welle. "This way they are showing that it's bad when these kinds of protests happen. We have to preserve stability. It's always the same. Stability has to be preserved and that's always the stability of the ruling elite in the country."

The Chinese media coverage has largely avoided addressing the causes of the protests. Although many governments around the world have distanced themselves from Mubarak - particularly those in the West - Beijing continues to stand firmly behind him.

"The reporting that we are familiar with here in the West, which attempts to make an analysis about why the people are in the streets, that doesn't exist in China," Woltersdorf said. "Mubarak is portrayed as a friend. It's always been important to the Chinese to have Mubarak as a stabilizing factor in Egypt. The Chinese position has not been shaken at all."

Beijing fears that the images of Egyptians defying Mubarak could awaken memories of Tiananmen Square in China. The Communist Party's concern is not unfounded. A few days ago, a video emerged on twitter showing a demonstrator blocking the path of a rolling water canon. Chinese Internet users immediately twittered about Egypt's "Tiananmen Moment," playing off the infamous photo of a student blocking a tank during China's aborted pro-democracy protests of 1989.

"Since things got out of hand in 1989, Tiananmen Square has been like a nightmare," Rudolph said. "Anything that hints at it is immediately swept under the carpet. Of course everyone knows what happened, but the lid is clamped down very tightly - it shouldn't be freely talked about. But if this lid were to be removed, a lot of unsettled accounts would have to be paid."

Hundreds of thousands of protesters in Egypt have gathered for the 'Day of Departure' rallies. President Hosni Mubarak said he would like to step down, but feared it would plunge Egypt into a state of chaos. (04.02.2011)