Beijing says it wants to join the pact, which regulates the $70 billion cross-border trade in conventional weapons, as soon as possible. The treaty has been ratified by 104 countries, but US President Trump has U-turned. 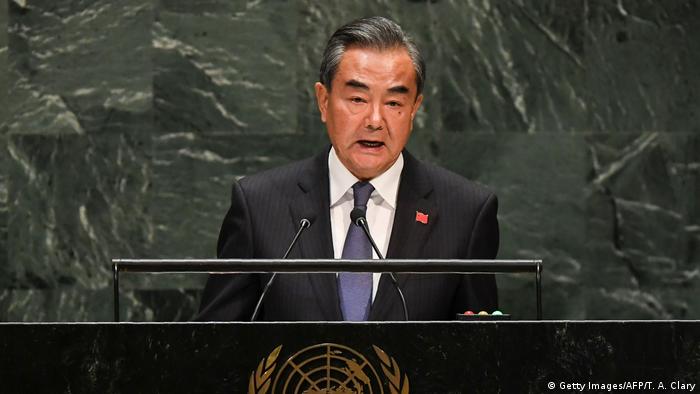 China has prioritized the signing of the Arms Trade Treaty (ATT), which seeks to control the trade in conventional arms and reduce human suffering, the country's Foreign Ministry said on Saturday.

The ministry reiterated Yi's statement, adding that it was China's determination to support multilateralism.

China's move contrasts with the United States, which has said it intends to withdraw from the treaty, despite an annual $70 billion global arms trade that hides a massive black market for weapons.

In April, US President Donald Trump signed an executive order to pull out of the pact during the National Rifle Association convention. He complained that the treaty would "constrain responsible countries while allowing the irresponsible arms trade to continue."

Wang, however, sought to play up China's credentials as a reliable member of the international community, saying the Asian powerhouse "is willing to continue to strengthen exchanges and cooperation ... to build a standardized and reasonable arms trade order" that he said would help to "maintain international and regional peace and stability."

Amid a lingering trade war that has seen Washington and Beijing impose tariffs on each other's imports, the chief Chinese diplomat took aim at Trump for the "unilateral withdrawal" of the US from the 1987 Intermediate-Range Nuclear Forces Treaty (INF).

The Chinese diplomat also reiterated that Beijing "is opposed to the deployment of land-based intermediate-range missiles in the Asia Pacific."

Last month, Chinese officials warned Washington against deploying such missiles in Asia. The US seeks to counter Beijing's move to control contested areas of the South China Sea, which has alarmed its neighbors.

Read more: Stemming the flow of illicit arms in Africa

So far, 104 countries have ratified the ATT, and another 32 states have signed but have yet to formally authorize the pact, which the UN General Assembly approved in 2013.

China was the fifth-largest global arms exporter between 2014 and 2018, according to the Stockholm International Peace Research Institute, though Beijing itself does not publish figures for how many weapons it exports.

Pakistan, Bangladesh and Algeria were the major importers of Chinese arms, the think tank said. The weapons included combat aircraft and anti-ship missiles.

Some military analysts believe Chinese-made weapons are comparable to their Russian or Western counterparts, due to years of steep increases in military spending.

China's domestic arms industry is vital to helping the country build a modern military. However, the country is still impacted by bans on Western weapons imports dating back to the 1989 Tiananmen Square massacre that left thousands of civilians and soldiers dead.

The Pentagon says it has tested a ground-launched cruise missile just weeks after exiting the INF treaty. The missile would have been banned under the bilateral agreement with Russia. (19.08.2019)