The UN health body made the gloomy prediction as Europe faces the prospect of a second wave of infections. Catch up with the latest about the COVID-19 pandemic. 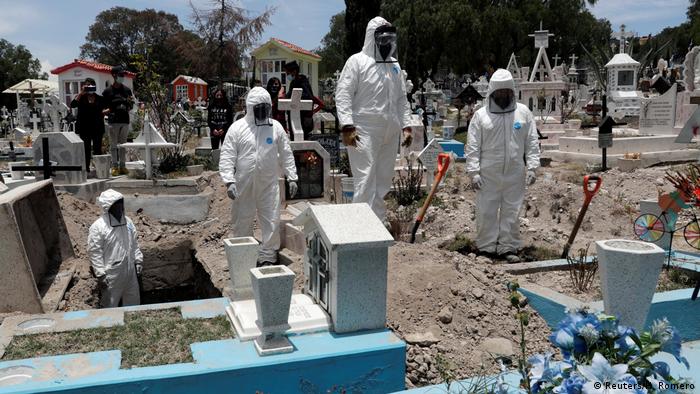 The World Health Organization (WHO) has announced the pandemic is likely to be a "lengthy" affair. In a statement, the health agency also warned of "the risk of response fatigue in the context of socio-economic pressures" as the pandemic enters the eighth month since it first hit the headlines at the turn of the year.

Meanwhile, former "success story" Vietnam is struggling to control an outbreak spreading in its most famous beach resort. A third person died in the country of coronavirus complications, officials said Saturday, a day after it recorded its first-ever death as it struggles with a renewed outbreak after 99 days with no local cases.

China reported a more than 50% drop in newly confirmed cases in a possible sign that its latest major outbreak in the northwestern region of Xinjiang may have run its course. However, in Hong Kong, infections continue to surge, with more than 100 new cases reported as of Saturday among a population of 7.5 million. Officials have reimposed dining restrictions and mask requirements.

South Korean authorities have arrested Lee Man-hee, the influential head of the Shincheonji Church of Jesus, which is linked to more than 5,200 coronavirus infections, or 36% of South Korea's total COVID-19 cases. Prosecutors allege the 89-year-old conspired with other sect leaders to withhold information from authorities during the peak of the outbreak among his more than 200,000 followers.

Here's a roundup of the other major stories regarding coronavirus around the world:

The Vietnamese coastal city of Danang said it plans to test its entire population of 1.1 million people for coronavirus infections as an outbreak spreads beyond the city.

Local authorities said 40 new cases linked to the city were reported across the country, taking total infections to 586. A third person died of COVID-19 complications on Saturday, a day after Vietnam reported its first-ever death from the disease.

Most of the new cases are linked to hospitals in Danang city, where the first locally transmitted infection in more than three months was detected last week.

India recorded its steepest spike of 57,118 new cases in the past 24 hours, taking its coronavirus caseload close to 1.7 million, with July alone accounting for nearly 1.1 million infections. Is public negligence causing a surge in cases? Read our full story here.

Japan's Okinawa region has declared a state of emergency and asked people to stay home for two weeks as the popular tourist destination sees an "explosive spread" of coronavirus cases. Read more about how a cluster of COVID-19 cases on US military bases shocked the prefecture.

Some 20,000 protesters have rallied in Germany's capital Berlin, with many ignoring social distancing rules and labeling the pandemic a "false alarm." Police eventually broke up the demonstration and some people were forcibly removed by officers. Read more about the protests.

In Germany, the number of confirmed coronavirus cases increased by 955 over the past 24 hours, to a total of 209,653, data from the Robert Koch Institute (RKI) for infectious diseases showed on Saturday. The reported death toll rose by 7 to 9148, the tally showed.

Economy Minister Peter Altmaier is calling for tougher penalties for those not adhering to coronavirus rules, this includes fines and penalties if it is a matter of "intent or gross negligence."

Poland has registered a record-high tally of new cases for the third day in a row, with over 600 infections recorded on each occasion.

As a result, the cabinet is pondering whether to re-introduce mandatory quarantine for people returning from coronavirus countries deemed high-risk. In addition, stricter measures could be introduced, concentrated in hotspot areas.

Russian Health Minister Mikhail Murashko said authorities are preparing a mass vaccination campaign to fight the coronavirus for October. According to Murashko, the Gamaleya Institute, a state research facility in Moscow, had completed clinical trials of an adenovirus-based vaccine and that paperwork was already underway to register the drug.

Rising death tolls in countries like Brazil and Mexico have cemented Latin America's status as one of the epicenters of the virus as cases in the region have doubled over the past month to more than 4.7 million infections. The real number of infections is likely to be higher, as comparatively fewer people are being tested there. Read our full story here.

Colombia, where lockdowns are planned through the end of August, passed the 10,000 death benchmark on Friday, tallying 10,105 fatalities. The Andean country is expected to reach 300,000 total cases over the weekend.

In the United States, lawmakers have been discussing a coronavirus relief measure, as political pressure increases to restore a recently expired $600-per-week supplemental unemployment benefit, while sending funds to help schools reopen.

"This was the longest meeting we had and it was more productive than the other meetings,'' said Senate Minority Leader Chuck Schumer. ``We're not close yet, but it was a productive discussion _ now each side knows where they're at."

In the US, Hurricane Isaias' imminent arrival forced the closure of some outdoor testing sites even as Florida reached a new daily high in deaths.

Muslim pilgrims in Mecca started the ritual stoning of the devil, one of the final rites of the hajj pilgrimage, throwing sterilized pebbles at a pillar due to the coronavirus pandemic.

Just 10,000 people, all of them Saudi-based, have been allowed to attend the religious event rather than the 2.5 million people from around the world who normally make the pilgrimage. All pilgrims had been tested for the virus, and were required to wear masks and observe social distancing.

As the continent approaches 1 million confirmed infections, the director of the Africa Centers for Disease Control and Prevention has said that Africa still has a "very good chance of beating back this virus" with a comprehensive strategy that includes testing assertively.

Meanwhile, the country with nearly half of Africa's virus caseload, South Africa, has eased its 9 p.m. curfew by an hour.

And The UN food agency has warned that nearly 60% of Zimbabwe’s population could become "food-insecure" by December without a further $250 million (€210 million) aid package.

Meanwhile, Kenya Airways has resumed international flights to about 30 destinations for the first time since routes were suspended in March due to the pandemic. The airline's chief executive officer said the carrier was resuming international flights following demand. Kenya Airways, in which Air France KLM holds a small stake, already resumed domestic flights in mid-July.

Catch up on the best DW content of the day

While many countries are easing their lockdowns, others are reporting more and more new COVID-19 cases every day. DW has taken a look at what the data tell us about a potential second wave.

In Germany, every second person surveyed feels psychologically burdened by the coronavirus pandemic. What are the social consequences of higher stress levels? Are people becoming more aggressive? Watch here to find out:

Is the pandemic making us more aggressive?