Only a small number of faithful are taking part in this year's hajj, usually one of the biggest religious gatherings in the world. Authorities have dramatically downsized the pilgrimage to prevent fresh virus outbreaks. 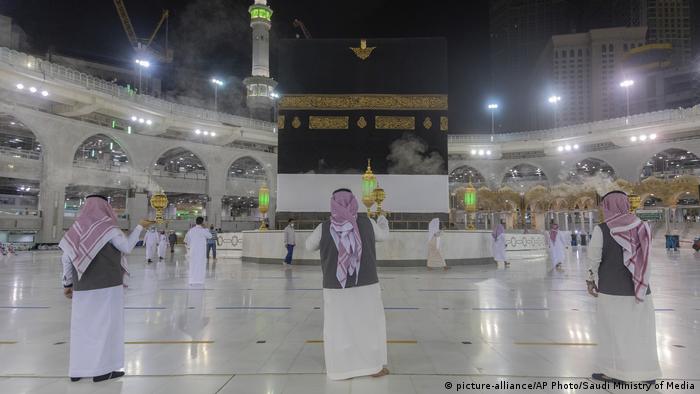 Muslims in Saudi Arabia on Wednesday began the annual hajj, a five-day pilgrimage taking place on a much smaller scale this year due to the coronavirus pandemic.

One of the five pillars of Islam, the hajj is a requirement able-bodied Muslims must perform at least once in their lifetime. Usually, more than 2 million people travel from around the world to take part, with huge crowds crammed into tiny religious sites. But this year only up to 10,000 people already residing in Saudi Arabia were allowed to attend.

"There are no security-related concerns in this pilgrimage, but (downsizing) is to protect pilgrims from the danger of the pandemic," Saudi Director of Public Security Khalid bin Qarar Al-Harbi said.

To limit the risk of contagion, pilgrims were asked to wear masks and observe social distancing during the series of rites carried out over five days in the holy city of Mecca and its surrounds in western Saudi Arabia.

State television showed pilgrims walking into Mecca's Grand Mosque on Wednesday divided into groups to begin the ritual with a walk around the Kaaba, a cube-shaped structure draped in gold cloth towards which Muslims around the world pray.

A hajj ministry program document said pilgrims were provided with a kit that included sterilized pebbles for a stoning ritual, disinfectants, masks, a prayer rug, and the ihram worn by pilgrims. 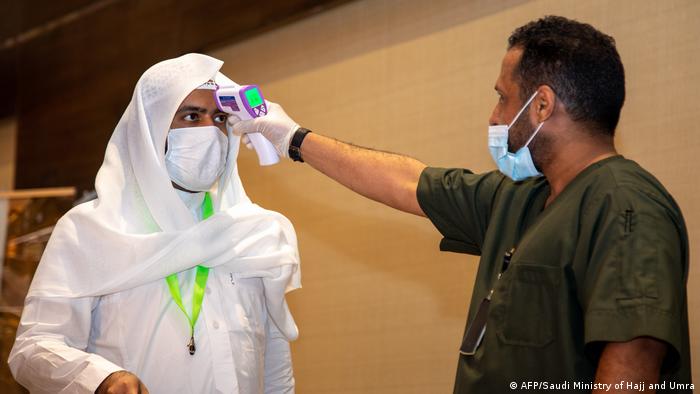 Thermal scanners were also set up across the holy sites to monitor people's temperatures.

This year marks the first time in nearly a century of Saudi rule over Mecca that people from outside the kingdom won't be taking part. Around 70% of the pilgrims are foreigners living in Saudi Arabia who were chosen in an online selection process, while the rest are Saudi citizens, authorities said.

Those selected for the hajj had to test negative for the coronavirus and self-isolate in Mecca beforehand, and they'll have to quarantine after the pilgrimage as well.

The hajj usually brings in billions of dollars to Saudi Arabia annually.

Analysts have said a scaled-back pilgrimage will worsen the kingdom's economic slump, partly driven by a collapse in global demand for oil as a result of national lockdowns. Businesses that rely on the huge crowds of faithful in Mecca are also expected to suffer.

Saudi Arabia has one of the largest coronavirus outbreaks in the Middle East with almost 270,000 infections.

About 1 million Muslim pilgrims are visiting Mecca for the first hajj since 2019 without strict pandemic restrictions. According to the Quran, all Muslims capable of going on the hajj should do so at least once in their lifetimes.